(Though the three are identified by first name only, Heather subsequently published a widely read piece in The Guardian revealing her last name to be Linebaugh, and Daniel, likewise through news media, is now known to be Daniel Hale).

The film focuses on the effect on men and women aged 18-24 who made decisions over whether someone else should live or die, and then sat and watched the destruction.

Heather, a drone imagery analyst and screener, was tasked with examining grainy footage of people in Afghanistan, determining as best she could from thousands of miles away the ages and genders of potential targets, and making the call as to whether the strike should take place.

Lisa, a former technical sergeant for drone surveillance, was privy to the data-gathering capabilities of the U.S. government. The ability to harvest reams of information about virtually every human being on earth, with no single governing body regulating how that data can be used, is a specter she believes that we should all find terrifying.

Daniel was an NSA intelligence analyst.

All three had top security clearance.

The Drone Program escalated under former President Obama. Though he insisted that the purpose of the attacks was protection, not punishment, the three maintain that the reality was far different.

Contrary to the way the attacks are portrayed in action movies, for example, the drones are far from “precision instruments” capable of making “surgical strikes.” Hale later revealed that in the course of one five-month period in Afghanistan, for example, 90% of those killed during drone strikes were not the intended targets.

In one chilling reenactment, the voices of two operatives are heard as they view blurry live video of prospective targets and discuss the possibility of a strike. One of them proposes there might be a mother carrying a baby; another “dude” responds, “That’s not a baby, I hate that b.s.” “Is that a kid?” one then wonders. “Nah,” the reply comes. “He’s over 12 — at 12 they can carry weapons.”

Clearly trigger-happy, they banter about the deaths they’re about to inflict. “Let the party begin!” one exults.

Seconds after the strike, the shooters realize “something is weird”: They weren’t able to PID (positively identify) a single weapon among those they’d just blown to smithereens.

The survivors lost 23 family members in the attack, including children. You do not want to watch the footage of the mutilated bodies being returned to their loved ones.

Granted, the film represents but a tiny cross-section of the Afghan population, but one of the most compelling aspects of the film is the lack of bitterness among the survivors. They’re not bitter; they’re in mourning. 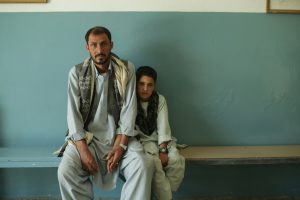 One young man, a husband and father awaiting decent prosthetics, noted, “When your body is intact, your mind is different. You are content. But the moment you are wounded, your soul gets damaged. When your leg is torn off and your gait slows, it also burdens your spirit. Sometimes I am so sad that my heart wants to explode.”

The U.S. apologizes, expresses sympathy, and insists that the civilian carnage will end. Then, the survivors say, it happens again.

In the course of our recent withdrawal from Afghanistan, we made one last “righteous” drone strike at supposed terrorists. The driver of the car turned out to be Zemari Ahmadi, a longtime worker for a U.S. aid group. Ten civilians, including children, were killed. Turns out the wrong vehicle had been targeted.

Heather has been officially diagnosed with PTSD, and is one of the first veterans of the U.S. Drone Program to receive disability benefits for her condition. “This is something I’ll live with for the rest of my life,” she noted. “I can’t bring the civilians I killed back to life.”

Lisa has returned to Afghanistan several times as a goodwill ambassador, intent on meeting with the people her actions affected and making amends as best she can.

At the time the documentary was made, Daniel was still under investigation for espionage. He was arrested and indicted in May 2019, on the basis of allegations that he disclosed classified documents for a series that ran in The Intercept called “The Drone Papers.”

He maintains that he had become a mass murderer, responsible for the killing of children, and that he could no longer live with his conscience.

Charged with five counts of espionage, on July 27 of this year he was sentenced to 45 months in federal prison on one of them (the other four were dropped).

The Catholic novelist François Mauriac observed, “Our hidden life in Christ ought to have some bearing on our lives as citizens. We cannot approve or practice publicity in the name of Caesar what the Lord condemns, disapproves, or curses, whether it be failure to honor our word, exploitation of the poor, police torture, or regimes of terror.”

Or, as Heather noted, “We shouldn’t have to try to prevent our own people from killing civilians.”