The program is entitled “Songs of the Soul.”

Their many awards include two 2022 Grammy Award nominations; Best Choral Performance and Best Engineered Album, Classical, as part of the Gustavo Dudamel-conducted live performance of Gustav Mahler’s “Symphony No. 8 in E-flat Major,” the recording of which was released by Deutsche Grammophon in June 2021; and selection as a semi-finalist for the prestigious The American Prize for Virtual Performance, 2021-22/professional division, for “The Wayfaring Project,” an original concert film produced by and featuring Pacific Chorale performing J.S. Bach’s motet, “Jesu meine Freude,” interwoven with contemporary works of American folksong. 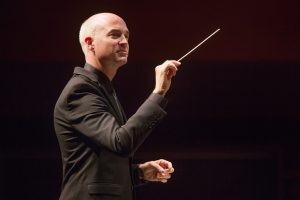 Robert Istad was appointed Pacific Chorale’s artistic director in 2017. He’s also professor of music and director of choral studies at Cal State Fullerton, where he was recognized as the 2016 Outstanding Professor of the Year.

In graciously agreeing to discuss “Songs of the Soul,” he first noted the fortuitous timing of the performance. “It’s almost like the program was delayed for two years by some kind of divine providence. We need this music now more than ever.”

The concert was originally planned for mid-March 2020. “The singers and I were rehearsing a week out. We didn’t know March 10 would be our last day together. We were all ready and so excited. So it was particularly heartbreaking to make the wise choice to cancel at that time.”

As they were programming this comeback season, the Chorale took to calling their pause the great fermata: a musical term meaning “to hold for an indefinite period of time.”

“We just looked at each other around the table and said, ‘We need to bring back “Songs of the Soul.” ’ The singers were so connected to this music. We had to perform it for everyone. So it’s really a triumphant return of this program.”

At their first rehearsal after a two-year break, they wondered how they’d sound. But right away they started singing the “Kyrie” from the Frank Martin Mass and the music was right there. “It was as if that ‘Lord, have mercy’ had been resounding the whole time and we just picked up where it left off.”

“It was gorgeous. I looked around the room and the singers were just welling up with tears.”

The music is constant: a source of continued respite and inspiration that the Chorale hopes to transmit to the audience.

“We want people to have a cathartic, soul-filled experience that gives them an opportunity to reflect on the past and also to imagine a brighter future. Our hope is that the music helps the audience better to connect with each other and with the greater world, regardless of where they choose to worship or whether they do at all. There’s something about this music that winds itself around your heart in a really special way.”

Istad considers the “Mass for Double Choir” by Frank Martin, a Swiss composer (1890-1974), one of the most beautiful in all the repertoire.

“His ‘Kyrie’ is haunting. He sort of riffs on an old Gregorian chant, then winds it around itself. It blossoms into this explosion of grief and penitence. It’s a tour de force that balances his respect for the Mass with a proclivity for vocal fireworks.”

That and Estonian composer Galina Grigorjeva’s “On Leaving” are the two centerpieces of the program, both about 25 minutes. The other four are shorter works providing an interesting modern commentary.

Grigorjeva (b. 1962) has been hailed as the first lady of Estonian choral music. “She’s taken her favorite chants from the Russian Orthodox Requiem Mass and arranged them in a modern, minimalist setting that’s simply mesmerizing. There’s a flute, some mystical percussion instruments. The service upon which it’s based is called ‘The Canons of Jesus Christ Our Lord and the Virgin Mary On the Hour of Leaving of Orthodox Souls.’ So the piece is to honor those who have just passed.”

The full choir comprises 140 people from many different perspectives, political leanings, and religions. “And they’re dear friends who love and support each other. I think it’s

“Of course I’m biased,” Istad laughs. “But I truly believe that if everyone sang together, this world would be a much better place.”