‘OPICA is my life’: Inside West LA’s innovative program for the elderly

OPICA (Optimistic People in a Caring Atmosphere) is an adult day program and counseling center for people with dementia.

Its programs include music and art, a rich variety of cognitive and physical exercise, and breakout groups centered on culture, storytelling, and peer support.

Located in Stoner Park in West Los Angeles, OPICA has no religious affiliation but has received generous leadership and fundraising support from local Catholic individuals and organizations.

“My mother was very high-functioning, a secretary and administrator for very distinguished people in her life. Even in her retirement, she’d volunteered to read for the blind, for hospice, and at her parish, St. Timothy’s.”

But she developed vascular dementia during the last 10 years of her life, starting with mild cognitive impairment. She ended up not being able to speak. She could still talk and eat and she clearly loved being with people. “When it started, my two siblings and I were terrified because we knew so little about it. We were like deer caught in headlights.” 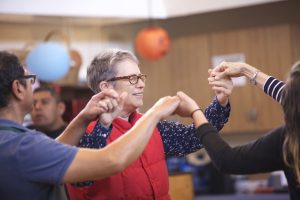 Mary and her husband live in West LA. Her mother lived in her own condo a half-mile or so away. It took a couple of tries, but after a few weeks of attending the program in earnest, she announced one day: “OPICA is my life!”

What would a typical day at OPICA look like?

Mary, who eventually shared duties with her siblings and a caretaker, had her mother on Sundays and would drop her off Monday morning at 8:30. “A nice social hour, with coffee and a treat. Usually followed by exercise, often to music, perhaps with pompoms or a beach ball.”

At 11 a.m., there was generally some kind of activity. A speech pathologist trained in leading discussions might come in with a newspaper article. They’d put words on the board: “What also begins with ‘m’?”

Then lunch, followed by breakout sessions. OPICA prides itself on the fact that its services are both comprehensive and specialized. So if art or dance don’t appeal, there’ll be other alternatives. Toward the end of the day an entertainer will come in: hootenannies, sing-alongs. Those who won’t get picked up till 4 p.m. can watch a movie while they’re waiting.

Even when she could no longer get up and dance, or paint, Mary’s mother could still clap her hands. She loved the staff coming up and being kind. She even had a boyfriend in OPICA at one point.

What goes on in the soul of a person with dementia?

“I think the bottom line is love. We come from love and I don’t think we ever leave love, even though it can be very much hidden away. The things that remain … gestures, for example. My mother could still reach out and take my hand, even when she could no longer speak. Complete strangers would come up to her and she’d take their hand and kiss it. In ‘real life,’ she never would have done that. Her response to music, art, this is all part of the inner person that is tied to love.”

Even in her supposedly diminished state, Mary’s mother also deepened her faith and cemented her solidarity with the Church. When she could no longer attend St. Timothy Church, Bomba started taking her to her own parish, St. Paul the Apostle Church in Westwood.

“And they loved her. Little kids would shake her hand at the sign of peace. You’re going to keep growing. You’ll still have friends. You’ll keep growing. Between the church and OPICA, we got a lot of support.” 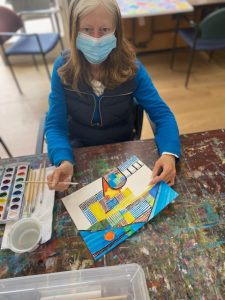 After Mass, they’d go back to Mary’s place and have breakfast. “I did nothing on Sundays, finally, but fun things with my mother. Even though she’s been dead for 15 years, I still observe the Sabbath. So that was a real gift she gave me.”

A retired hospital chaplain, Mary ended up serving on OPICA’s board of directors for nine years as a way of “giving back.” The program serves those with Alzheimer’s, Parkinson’s, traumatic brain injuries, and even those born with developmental challenges.

“We charge the members about half what it costs us. Half of operating revenue comes from grants and donations. The other half is supposed to come from fees. But we try to make sure that nobody is turned away.

“My mother was from England, a fine mother, but very disciplined, brisk. We kids got very little physical cuddling. But when she got dementia, it was as if a filter had been removed. She wanted to hug us, to lean up against us. It was just beautiful. At the end of her life, we three children got a lot of the physical contact we didn’t get when we were young.”

“Jesus said, ‘I came so that your joy may be complete.’ OPICA is really a lot about joy, however a member can experience it. That’s really what OPICA offers.

“Of course I worry about memory loss myself. But it’s a comfort to know that even with dementia, a person can continue to grow emotionally, spiritually, creatively.

“I feel less frightened knowing that OPICA is there.”