Francis Poulenc’s “Dialogues of the Carmélites” is a 1957 opera based on the true story of the Martyrs of Compiègne, a community of 16 Carmelite nuns who were guillotined during the French Revolution’s virulently anti-Catholic Reign of Terror.

The libretto is by Georges Bernanos (1881-1948), Catholic novelist best known for “Diary of a Country Priest.”

I confess that opera (favorite arias aside) is not my first love. Enter “Dialogues of the Carmélites,” which I came across in the form of a high definition Metropolitan Opera broadcast, a series that brings opera performances live into movie theaters throughout the world, and then archives them.

The opera (note, this is the April 4, 1987, performance, with director John Dexter and designer David Reppa) follows the spiritual pilgrimage of Blanche de la Force (Maria Ewing), daughter of an aristocrat whose entire way of life is threatened by the bloodthirsty mob hellbent on liberty, brotherhood, and — so like our own contemporary mobs — “equality.”

Emotionally frail, spiritually overwrought, and initially driven by a desire to escape from the world, Blanche joins the convent, sits vigil with the treasured Mother Superior, is guided by two other mother figures, and forms a special bond with Sister Constance (Betsy Norden).

The sisters are arrested, thrust out of the convent, and sentenced to death. In prison, they take a joint vow of martyrdom. Meanwhile, Blanche escapes and flees back to the family home, from which her father has been dragged and guillotined the previous week and where she is forced by the former servants to act as charwoman. But at the eleventh hour, her conversion becomes complete. She leaves the house, makes her way through the crowd, singing, and joins her sisters at the guillotine. 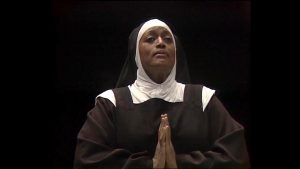 Jessye Norman in the 1987 production of "Dialogues of the Carmélites." (©The Metropolitan Opera)

In an otherwise glowing review, critic Michael De Sapio noted, “If I have reservations about the piece, it is largely because its first half is filled with abstract spiritual discussions that are poorly suited to musical treatment. This portion of the opera feels static and verbose — not to mention overlong — with Poulenc having little to do but spin exquisite filigree around the text, between increasingly powerful orchestral interludes.”

To me, those conversations were the soul of the opera, establishing the backdrop of Blanche’s very human journey through fear, the death of pride, and grace.

Blanche is “high-strung and inclined to be morbid,” notes her brother, the Chevalier de la Force, in the opening scene. “There has been only one Resurrection,” Blanche observes dreamily, “that of Easter morning … but every night of one’s life is like the agony of Christ.”

She soon sets about discerning her possible vocation. The stage set for the convent is brilliant: a giant ivory-colored cross, bathed in shadow, laid out on the floor. A metal grille, a special chair for the wimpled prioress, Madame de Croissy (Régine Crespin).

“Our order does not tend toward tenderness and pity,” the imposing Mother Superior reports. Becoming a nun is about letting illusions and desires for heroism die.

“The purpose of an order is neither to mortify the human soul nor to safeguard virtue: We are a house of prayer!”

Then again, “Each and every prayer, even that of a little shepherd tending his flock, is really the prayer of the whole world.”

“The trials that await you are not easy, my daughter — but what God desires is not your strength, but your weakness.”

Thus, Blanche enters the convent, choosing the name Sister Blanche of the Agony of Christ.

Mother, knowing she is dying, commends Blanche to the care of Mother Marie (Florence Quivar). The prioress’ death is difficult. Bulwark of strength and faith, at the end she nonetheless feels terrified and abandoned.

Mother Lidoine (Jessye Norman) becomes the new prioress. In the ensuing days, the black-robed, hooded sisters glide, genuflect, beseech, work, joke, and weep, all as their feet move across that huge white cross.

Knowing of the mobs outside their doors, they reflect on what they’ve been taught: that prayer is a duty; martyrdom is a reward.

Then again, they must ask themselves: Is the desire for martyrdom mere grandstanding, or does it stem from a genuine abandonment to God?

The authorities close in. When the chaplain is forbidden to preach, Mother Lidoine observes, “When priests are lacking, martyrs are superabundant.”

When the sisters are at last arrested and sentenced to jail to await their execution, Blanche flees. At the Place de la Révolution, the nuns process slowly, one by one, to the guillotine, singing the “Salve Regina.” The heavy metallic thud of the guillotine, heard offstage, is indescribably chilling. As Sister Constance, the last to go, proceeds, Blanche emerges from the crowd to follow her. As she sings “Veni Creator Spiritus,” she walks offstage and the guillotine falls, silencing her mid-stanza.

The opera was worth every minute of the three hours. The acting was superb; French maestro Manuel Rosenthal conducted. But it wasn’t the music that stayed with me. It was the Mother Superior’s death — so excruciating as almost to be unworthy of her; so not a traditional martyrdom.