On vaccine mandates, let’s heed the lessons of past emergencies

Whether after an attack like the one we experienced on 9/11, or when living through a terrible pandemic, it is a perfectly natural impulse to exclaim “we’re at war” or “it’s a national emergency” and insist we do things in a fundamentally different way.

But as I warned back in March of 2020, we must not give up our foundational values in so doing — putting at risk the very way of life we are trying to defend.

It is now clear how this happened in the so-called “war on terror.” We gave up on Congress’ constitutional role in explicitly declaring war. We gave up our privacy rights via the Patriot Act and an expansive state. We even looked the other way when our CIA tortured people.

A similar mindset formed at the beginning of the pandemic. Similar fear. Similar willingness to put aside foundational values. At that time, I was concerned about how our rationing strategies were discriminating against the elderly and disabled. But we have now arrived at a different stage of concern: scapegoating the “anti-vaxxers” and insisting many millions of Americans violate their consciences — perhaps even through government mandates that citizens put a brand new (by medicine’s standards) drug into their bodies for the sake of the common good.

Let me make my own view clear. Unless one has a relevant medical condition, I believe one has a moral duty to get vaccinated based on (1) the care for the life God has given us and (2) our duty to the common good. I agree with Pope Francis and the Congregation for the Doctrine of the Faith that it is licit to take the vaccine despite its having been tested using the cloned cells of a prenatal child unjustly killed more than a half century ago.

But how that moral duty plays out in public policy is a separate question, one which forces us into the realm of prudential judgment and weighing of different goods. 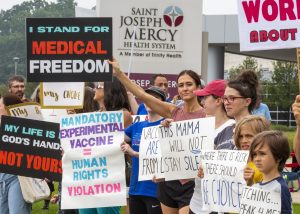 Demonstrators outside St. Joseph Mercy Hospital in Pontiac, Mich., July 24, 2021, protest the COVID-19 vaccination requirement the hospital's parent corporation, Trinity Health, has put in place for all of its hospital workers. The requirement is effective Sept. 21 and applies to 117,000 employees in 22 states. (CNS photo/Jim West)

It may be possible to lower infection rates by mandating vaccine compliance — and this would be a good outcome, especially as Delta ravages the US. But discussion of public policy asks us to think about what kind of power we give the government by upholding the following principle:

The government may force a citizen, against their deeply held religious, moral, and/or personal beliefs, to undergo a medical procedure in service of the common good.

It isn’t difficult to see how such a principle might be abused. Should those who are obese — understood to be a drain on public health care resources given their increased health issues (including from COVID-19) — be forced to undergo bariatric surgery for the sake of the common good?

Should deaf children have hearing implants forcibly inserted in order to take a load off the local public-school system? And what might this principle mean for a future with genetic therapies? Do we really want a government with the power to force such interventions at the service of the common good?

Basic civil rights are meant to protect individuals from this kind of injustice.

It is true that a child must be vaccinated in order to attend public schools — but private schools and homeschooling are still options for families with a different point of view. Until now there has been a clear red line when it comes to the government violating the bodily autonomy of citizens by forcing them to undergo a medical procedure.

But what’s all this talk about bodily autonomy? I thought Catholics are supposed to be pro-life? Doesn’t this sound like “my body, my choice”? What happened to using the government to coerce someone’s medical choices to protect the vulnerable from death?

While at first glance these may seem like similar issues, the claim pro-lifers make against abortion is that one may not, under the guise of a medical decision and bodily autonomy, actively kill someone else. According to Catholic teaching, a woman may in fact choose to undergo a necessary medical procedure (say, removal of a cancerous uterus or of fallopian tube) that will result in the child’s (foreseen but unintended) death. Pro-lifers are instead focused on violent acts that aim at the death of prenatal children.

Furthermore, though the science on this is not yet settled, physicians like Aaron Kheriaty argue that those who have already been infected with COVID-19 have natural immunity to the virus which is equal to or even exceeds that of vaccines. Indeed, in a recent federal lawsuit against the State of California, Dr. Kheriaty argues there is no benefit to the common good by forcing COVID-19-recovered citizens to take a drug they don’t want to take.

At this difficult moment of the pandemic, the Church should redouble its important work in increasing vaccine access and work to convince those who pose a risk to themselves or others to take it. But on the level of public policy, the Church should also defend the consciences and bodily integrity of those who have decided not to take it.

That many are willing to trample the civil rights of their fellow citizens — especially when those who are not vaccinated are disproportionately Black and Hispanic — indicates that we are facing a danger similar to what we faced after 9/11. Many are living with understandable fear and even desperation, but our response to this new enemy must not repeat the mistakes of the past. Our response must not abandon those values that make us who we are.