Of Clint Eastwood and imperfect priests

The world wags on, despite everything it has decided to throw at us, and will surely continue to hurl in our direction. But babies are still being born, and people are still getting to Mass either in person or virtually, and confessions are still available, as long as the supply of plexiglass holds up.

We either count our blessings or wallow in misery. As I sit here fighting the urge to wallow away, there really are more than enough blessings to keep us all counting on.

Popular culture is probably not one of those blessings, and its current manifestation is more curse than blessing anyway, yet it can still be a source of inspiration, even though the vast majority of the entertainment it creates that involves the Church or her ministers usually ends badly. The heady days when Hollywood sent love notes to the Church in films like the 1940s “Going My Way” are not coming back.

The 1950s saw more edgy depictions of the priestly life, like Hitchcock’s “I Confess” and “On The Waterfront,” with the latter still being what I think is the greatest portrait of what a good priest is all about. But in the past 50 years, give or take a decade, priests don’t generally fare well within the confines of popular culture. Sadly, most depictions of the Church and its clergy aim to demean, defile, or deflate.

A lot of the pain is self-inflicted. If we have a bull’s-eye painted on our backs, it was put there by sin and scandal. It is only natural to expect the secular culture to take its swings.

But just as God permits calamity, he also shows his light in the darkness, whether it comes from the flickering candlelight inside the depths of a catacomb with early Christians reading Scripture in Rome circa A.D. 273, or from the bright fluorescent lighting in an intensive care COVID-19 unit in an LA hospital circa now, where a nurse treating a patient says a silent Hail Mary. 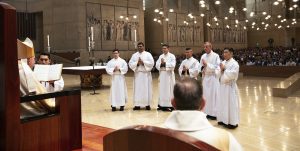 Priesthood ordination at the Cathedral of Our Lady of the Angels on June 1, 2019. (Victor Alemán)

I found the flickering light of a profound and positive portrayal of a young priest in, of all places, Clint Eastwood’s movie “Gran Torino.” Eastwood has had a huge career. He has made a lot of good movies, several great movies, but all of them seem to share a modernist nihilism that in the end leaves an empty feeling.

Not so “Gran Torino.” On the surface it certainly feels, and sounds, like a typical Clint Eastwood movie. And when we see his cranky, retired auto worker character encounter his fresh-out-of-the-seminary priest, things go poorly, especially for the young priest.

In the hands of a lesser director, and maybe in the hands of a younger Eastwood, the newly minted priest’s first scene would have been his last. He would have served the purpose of being a fumbling, ill-equipped foil to Eastwood’s character and his grizzled and dour point of view of life, the Church, and priests.

But as the movie unfolds, the young priest shows up at critical times, and at the end, he has grown in some wisdom. We get the sense that he is on his way to finding his voice, which is going to serve his vocation. He has also had some role in moving Eastwood’s character toward the light, rather than continually cursing darkness.

Either intentionally or by divine intervention, popular culture in the 21st century served up the character of a Catholic priest who is imperfect, yet moving, real, and something of an inspiration.

Imagine other energetic young people with masters’ degrees. When they get that first job with a Fortune 500 company, they are not immediately escorted to the boardroom to begin giving advice to the CEO. They start a lot smaller; some of them, even with advanced degrees, start in the mailroom.

Not so with new priests, like the fictional Father Janovich in “Gran Torino.” All priests are expected to be experts at the first Mass they say, the first confession they hear, or their first encounter with an embittered widower.

And once ordained, all priests serve the exact same function at the Mass and within (Centers for Disease Control and Prevention mandated protocols, of course) confessionals, as any bishop, cardinal, or pope. They are hurled headfirst into the deep end of the baptismal font.

Not many new priests will have the advantage of being inspired and mentored by Clint Eastwood, but with God’s grace and with the prayers and support of parish communities, they, too, will find their “voice” that will serve their vocations and become sources of light to those they may encounter who are stumbling in the darkness.