“Lourdes” (2019), a documentary directed by Thierry Demaizière and Alban Teurlai, centers on the small town in southern France where the Virgin Mary appeared to teenager Bernadette Soubiros 160 years ago.

Today, more than 3 million people visit Lourdes each year, including 100,000 volunteers and 80,000 maladies: the ill and/or disabled.

But the documentary goes in a different direction entirely.

The opening shot is of various hands — some work worn, some beringed, some wrapped with rosaries — stroking, touching, caressing the walls and ceiling of the grotto.

“When you are at Lourdes,” the message runs, “you can show yourself as you are, in all your grandeur and all your weakness.” 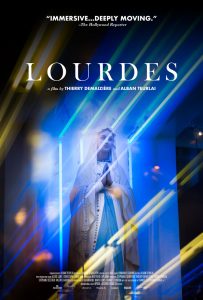 The movie poster for the film "Lourdes." (© Distrib Films)

The filmmakers themselves are not Catholic. But principal writer Sixtine Leon-Dufour had a long history with Lourdes, having served many weeklong stints as a caretaker.

In an interview with “Criteria: The Catholic Film Podcast,” she observes: “Lourdes is a place for everyone, not just well-mannered religious people. You have firefighters, gypsies, the motorcyclists’ pilgrimage. The prostitutes of Paris make an annual pilgrimage and it’s the highlight of their year.”

“We wanted to go deep into the human condition. At the end of the day we all have the same poverty before the holy Virgin. We’re all full of hopes, struggling with sadness.”

Operating from the premise that the heart of Lourdes is the relationship between the caregivers and the sick people, the filmmakers followed several weeklong pilgrimages. In the process, they selected six pilgrims on whom to focus.

Patrick, a young father, has come to Lourdes with his son Jean-Baptiste, an 8-year-old afflicted with a genetic growth disorder. His wife is back home with little Augustin, who suffers from a fatal skin condition. His body is covered with open blisters and sores — in the mouth, in the eyes — the pain of which eludes even morphine. The life expectancy of such children is two years.

How old is Augustin? A pause that contains all the sorrow of the world. “Two,” Patrick replies.

“Patrick is a military guy, very strong, straight,” Leon-Dufour observes. “And he was in so much pain. We didn’t want to use voice-overs. But after we got to know him, we asked, ‘Do you mind saying your prayer out loud?’ He said a big yes. And it changed everything.”

The prayers of the pilgrims elevate the film to a level that transcends time and place.

An overweight teenage girl, mercilessly bullied at school, is dipped into the healing waters and we could be at the River Jordan during Jesus’ time.

A mother whose son, now 40, had suffered a childhood accident on her watch, feeds him with all the tenderness of the Virgin Mary standing at the foot of the cross. 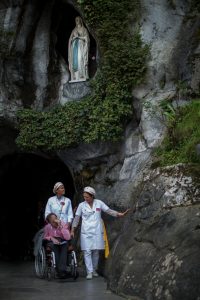 A scene from "Lourdes." (© Distrib Films)

The extraordinarily moving original music composed by AVIA (aka Pierre Aviat) enhances the effect. Spare, sustained chords of piano and strings evoke: “Why, Lord, why? From the halt, the lame, the blind, you ‘hear’: Why have you abandoned me?” You hear: “Father, I believe, help thou my unbelief.”

Jean-Louis has survived two suicide attempts, the second of which left him confined to a wheelchair and mostly unable to talk. He’s come because faith is his only hope and yet:

“Does your faith make your life easier?”

And does it, for any of us? Why do the sick come? They’re not looking for a miracle. In fact, spontaneous healings at Lourdes are extremely rare: since 1858, the Church has acknowledged only 70 of them.

Jean, suffering from Lou Gehrig’s disease, a fatal wasting disease, muses that he, of course, hopes for a cure and yet — why should he, of all the sick and suffering people in the world, be healed? Would not such an extraordinary favor be almost … unseemly?

“And if his painkillers stop working, please give us the strength to stay with him until the end.”

“I prayed hard, really hard, that he might at least stand up. … But I finally understood that this was my purpose on earth. That I was meant to care for my son.”

“Holy Mary, I get harassed at school … harassed and insulted on the internet. …”

“My Lord, protect me. Make me change my life.”

Did Mary really appear to Bernadette all those years ago? Does it really matter?

To watch thousands and thousands of pilgrims, the stars shining overhead and the candles below like more stars, a glowing statue of the Blessed Virgin held aloft, voices raised in “You reign now in heaven, with Jesus our King” is to know that the miracle has already happened.

The miracle happened 2,000 years ago when they rolled away the stone and found an empty tomb.

To find out where Lourdes is playing, check Distrib Films (in Brooklyn), distribfilmsus.com. If all goes well, the film will be available to stream online and as a DVD in August.