Lost and found in Mexico City

That was the clarion call of a recent weeklong pilgrimage to Mexico City and its environs that my wife and I recently embarked on.

We had never been part of an organized tour group before, let alone one with a pilgrimage focus. This one, headed by the Bishop of Fresno, was an easy decision and we made the journey with some 30 or so fellow travelers.

There were two priests, two deacons, and several permanent deacon candidates and their wives, many musically blessed travelers, and several NSPs (non-singing pilgrims) like us.

And, of course, there was Dolores, who tried to make an 8:30 a.m. international flight by arriving at LAX at 7:30 a.m. She would have had better odds finding Bigfoot. She endured a grueling multiflight itinerary to eventually catch up with us, but her joyful attitude and gratitude was the first pilgrimage miracle we witnessed. 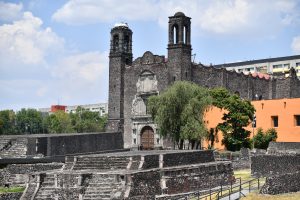 One of the churches the author’s pilgrimage toured in Mexico City. In the foreground are remnants of Aztec sacrificial pyramids. The church is built from the same stones. (Joe Lazalde)

Before we left, one of our sons wondered out loud if Mass every day really sounded much like a vacation. I confess that the same question passed through my head, but I assured him that I had investigated peer-reviewed research papers and found no evidence anyone ever died from going to church every day. “But why take the chance?” he responded.

My wife and I are truly happy we took that “chance.” It helped that my brother the bishop was at the top of his preaching game, but there were also the many “little” daily events that made this journey a true pilgrimage. The love for God in the people of our bus became infectious — there might even be peer-reviewed research that confirms that kind of thing.

It was a pilgrimage filled with small but profound moments of grace and divine communication, even if we were constantly trying to figure out where Dolores had wandered off to. Upon arrival on a Saturday, we went to Mass at the Basilica of Our Lady of Guadalupe and marveled at the tilma with the miraculous image.

At Mass celebrated in a small chapel on the basilica grounds, the Sunday Gospel told of the apostle Thomas’ insistence of a physical sign from God. The irony was not lost on us that a short walk away was a physical, clearly visible sign granted by that same God, which a successor to the apostles, the bishop of Mexico, had also insisted on receiving.

Another day, we had Mass at Holy Family Church in Mexico City, today the resting place of Blessed Miguel Pro. Father Pro became famous for outstretching his arms at the moment of his martyrdom at the hands of anti-Catholic civil authorities during the Mexican Revolution. The reading that day from the Acts of the Apostles was about how the apostles refused to follow “man’s” law and would continue to preach in the name of Jesus, just as Blessed Miguel Pro had done, even as bullets tore into his body.

The Gospel for the last Mass we were to have in Mexico was about the miracle of the loaves and fishes. So of course, the tabernacle in this chapel was adorned with a loaves and fishes motif.

At the various gift shops throughout the trip, my wife and I felt less like tourists and more like religious object collectors. One object was eluding us — a medal or pin of St. Michael the Archangel. Michael is the confirmation name of our oldest son. We had decided that would make a meaningful souvenir to bring home, and we scoured various gift shops all week but found nothing.

We spent our last couple of hours at the Basilica of Our Lady of Guadalupe — Mass first, of course, and then one last shot at the gift shops. Still, St. Michael was nowhere to be found. 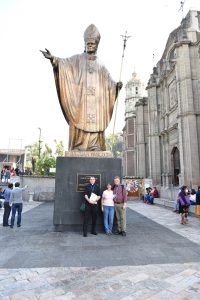 The author with his wife and his brother, Bishop Joseph Brennan of Fresno (former auxiliary of LA), this spring in front of a statue commemorating St. Pope John Paul II’s visit to the Basilica of Our Lady of Guadalupe. (Joe Lazalde)

As we waited under the large statue of St. Pope John Paul II for our fellow pilgrims to gather and get back on the bus for the airport, our friend Anna arrived with something she bought for us. She found a pin of St. Michael. I am not sure if we mentioned we were even looking for such a thing to Anna, but even if we did, the fact she had the heart to look for it and find it is all the supernatural provenance we needed.

As we got on the bus, my wife and I shared this special moment together and we were so grateful we “risked” it and signed on to a journey that included Mass every day. And we are and always will be forever grateful to one of God’s greatest gifts to our family and to so many others, the Bishop of Fresno.

We only had one last question to answer as our tour guide took a final headcount on the bus: “Where’s Dolores?”

Mexico, Our Lady of Guadalupe, Pilgrimage