'We're all malades': What I lost and found in Lourdes

“We’re all ‘malades.’ ” Referring to the French word for people who are sick, my cousin and godfather, Mike Smith, a Knight in the Order of Malta, spoke these words that persuaded me to say yes to his invitation to join the pilgrimage to Lourdes.

I didn’t want to take the place of someone more worthy.

For nearly 30 years, I’ve lived with on-and-off-again pain and other symptoms triggered by a range of autoimmune conditions.

When my pain level has been at its worst, I’ve felt closest to God. 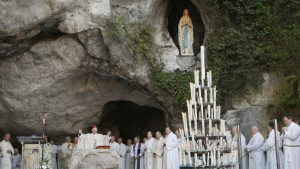 Mass is celebrated in the grotto at the Shrine of Our Lady of Lourdes in France in this file photo. (CNS photo/Nancy Wiechec)

In 2019, when I was in a wheelchair for four months and battled pain daily, Mike called me. “Mary has asked me to ask you again,” he said.

“Let’s do this,” I responded. I hadn’t expected a second chance to go to a place of healing, and I felt grateful for it.

My application was accepted, but the pandemic delayed my journey for two more years. In April 2022, I landed in Lourdes with the Order of Malta and my caregiver, Dori Wagner O’Donnell, a dear friend from my days at Mayfield Senior School in Pasadena.

As someone who fatigues easily, I was worried about the demanding schedule. In one day, I attended Mass, was re-baptized, went to reconciliation, had my feet washed, and received a medal at a special ceremony among other activities. But the kindness and positive energy of the Knights, Dames, priests, nuns, caregivers, volunteers, and my fellow malades — and the place itself — energized me.

Even though I was one of the malades who rode in a blue cart, I met Knights, Dames, priests, and nuns who had once been “malades” or who were now caregivers. As Mike said, we are all malades — or will be.

While in Lourdes, something unexpected occurred. My pain level increased. This was a place of healing, so why was I hurting so much? Perhaps the barometric pressure changes during the flight and stormy weather in France ignited inflammation in my body. Tendons in my wrists were on fire, evoking pain that shot up my arms into nerves in my neck. Dr. Joe Pachorek, a member of the Order of Malta medical team, jumped into action and purchased medicine to treat my symptoms, which took the edge off.

One Knight-turned-malade shared something that stayed with me: “When young Bernadette saw Mary at the grotto in 1858, it had been a garbage dump, not a holy place.” He encouraged us to dump our garbage there. I had viewed the grotto with its intention box as a place to ask Mary for what I wanted, not as a place to dump what I no longer wished to carry.

His words inspired me to make two lists: What I want and What I release. On a sunny afternoon, I went alone to the grotto, a place of peace. I kneeled and prayed in front of the statue of Mary, now flanked by pink roses that recently appeared. 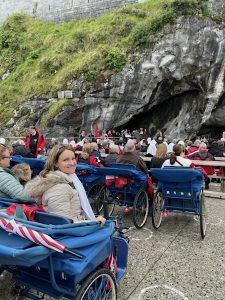 “Des voitures” ("carriages") carrying malades sponsored by the Order of Malta Western Association are lined up for Mass at the Grotto. (Courtesy Jenny Gorman Patton)

Among the many items I wanted were patience, direction on the book I was writing, and a fitting job for a loved one who was unemployed. To my surprise, my dump list was longer: pain, self-pity, resentment, and ego, among others. Tears flooded my eyes. I placed my intention list in the box beside the healing water, then crumpled up my release list and threw it in a trash can beside the Gave de Pau River.

Now, a few months later, everything on my intention list has been manifested, and several items on my release list have begun to dissipate.

I wish I could say that all my physical pain is gone. It’s not, but that’s OK. I’m pursuing new treatments and feel hopeful — and I’m practicing patience.

The trip to Lourdes reset me emotionally and spiritually, and I learned that we can feel both broken and whole at the same time. We’re all malades, and we’re all worthy.