“My Fair Lady,” that perennial crowd-pleaser, runs at the Dolby Theatre in Hollywood Oct. 7-31.

It so happens that my dear friend Patrick Kerr is a member of the cast. Classically trained at Yale School of Drama, and based in New York, he’s acted professionally for 40 years with credits that include the recurring role of Noel Shempsky on the sitcom “Frasier,” a three-year Las Vegas run as Zazu in “The Lion King,” and the Broadway shows “You Can’t Take It With You,” Terrence McNally’s “The Ritz” and Tom Stoppard’s “Travesties.”

That’s not even to mention the countless runs in regional theater and Shakespeare festivals.

Based on the 1912 play “Pygmalion,” Eliza Doolitte undergoes a classic rags-to-riches transformation. George Bernard Shaw’s dialogue is matchlessly witty. And the iconic Lerner and Loewe songs are part of our shared heritage: “Get Me to the Church on Time,” “The Street Where You Live,” “I’m Getting Married in the Morning,” “A Little Bit of Luck.”

Patrick plays Harry, one of Doolittle’s two sidekicks. He’s also an understudy for both Doolittle (Eliza’s father) and Pickering.

“I’ve been in musicals before but almost always as a principal. Singing and dancing are not my forte, so being a member of the chorus is a fantastic challenge.” 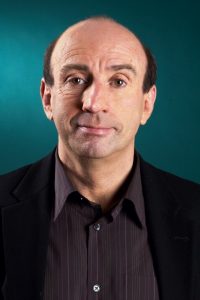 He’ll turn full retirement age during this run — not that he’s planning on any such thing.

“Actors don’t really retire. But what brings my career full circle in a way is that ‘My Fair Lady’ was my first professional job. I was in college, undergrad, at Temple University. City Line Dinner Theater in the Philadelphia suburbs for 50 bucks a week. A taped track, not even an orchestra, performing on a platform. I was playing pretty much the same part. And I was in seventh heaven.”

“My first acting teacher made the point that two things are required for theater: actor and audience. If a tree falls alone in the forest and no one hears it, that’s not theater. That’s rehearsal.”

One facet of the play is that class, even our fate, is determined by the way we speak. Another is that life allows us to discover who we really are, apart from any externals.

“Eliza has a great line: She says that in Covent Garden, ‘I sold flowers. I didn’t sell myself.’ ”

The nationwide tour started in December 2019, in Syracuse. The company was in Columbus, Ohio, when COVID-19 hit. At first they thought they’d be shut down for just a couple of nights.

“Our profession, like so many others, was brutalized by the pandemic. Shereen Ahmed, the youngest person in our company, plays Eliza. This 28-year-old young woman with the role of a lifetime, the dream of a lifetime, had to wait 1 1/2 years to resume. She wears it with such grace and generosity. She’s the loveliest person in the world backstage. Beautiful as well.”

I Zoomed with Patrick the following morning.

“The show’s practically sold out in Texas. The audience was very happy to be there.

“You hear the Lerner and Lowe overture, the downbeat, we’re all piled in the wings, you rip your mask off just before. You go walking on. And then…”

He pauses, too choked up to speak.

“Laird Macintosh, who plays Higgins: It was as if he’d been shot out of a cannon. The energy was absurd. So sharp, so alive, so on point.”

“And Eliza! One minute she’s making these awful sounds, like a chicken. Five minutes later she’s singing in the most beautiful, purest, most angelic, contralto. That’s the fantasy, the hope, that all we diamonds in the rough can pull into that.”

So for a second, Patrick was a member of the audience, too.

“At the same time, we’re all just doing our jobs. Where are my gloves? Is my top hat okay?

“You don’t know if everyone is feeling the same thing. You don’t have time to. But when the curtain rang down … the audience jumped to their feet. We took our bows. And then, backstage, the cheer went up — from us. People turned to each other, and everyone started crying. Crying and weeping and hugging each other. Tight. That’s when we knew we were all feeling the same thing.”

The company is on a nationwide tour that will end in September 2022. The show is extremely COVID-19 safe. The cast members are all tested twice weekly, everyone’s vaccinated, and masks are worn backstage. All the theatergoers are required to wear masks, too.

“It’ll be great to be back in LA. LA was good to me. I lived here for 13 years. I have friends I want to see. LA theater people are so smart, so discerning. Plus LA has the best food in the world for a vegan.”

“I love my work. In any circumstances, in any capacity. I’ll wear a mask. I’ll get tested for COVID twice a week.

“So the theater is back. Our jobs are back. Now we know: This will happen again.”