ROME — Fans of “The Simpsons” will recall the episode in which Lisa discovers a buried skeleton people take to be the remains of an angel, and the case ends up in court. Judge Snyder declares that the trial will “settle the age-old question of science versus religion,” and he wraps things up by issuing a restraining order requiring science and religion to stay 500 yards away from each other.

Like most comedies, the episode got laughs because it captured a truth, which is that over the centuries, science and religion often haven’t been on good speaking terms. Catholics often get defensive about such perceptions, insisting (rightly) that the Church has been a great patron of the sciences, but that doesn’t change the fact that from Galileo to the Scopes Monkey Trial, the science/religion relationship often has been tense.

The last month, however, highlights two mammoth milestones in what could perhaps best be described as a long-term rapprochement between these two old rivals, at least as far as the Catholic Church is concerned, in which Catholicism and the papacy are emerging not as enemies of today’s scientific community but, in many ways, its most ardent spiritual ally.

The first is the gradual easing of coronavirus restrictions in Italy and many other parts of the world, with Pope Francis repeatedly urging compliance with restrictions and protocols based on scientific and medical expertise. The pope even cut the Italian bishops off at the knees in late April when it appeared they might defy the Italian state and resume public Mass on their own, insisting during one of his daily livestreamed Masses on “obedience” to state decrees based on scientific input.

The second is the five-year anniversary of “Laudato Si'” (“Praise Be to You”), Pope Francis’ encyclical letter on care of creation and the first-ever encyclical devoted entirely to the environment. In it, Pope Francis not only embraced what he called “a very solid scientific consensus” regarding global warming, but also issued a manifesto for urgent action based on that consensus.

On May 17, the Vatican began what it called “ ‘Laudato Si'’ Week” to highlight the anniversary, which is intended to launch a wider, yearlong set of events to reflect on the encyclical and its implications. Among other things, Rome has asked parishes around the world to host an online “Common Prayer for Earth and for Humanity” on Sunday, May 24, at noon to close the anniversary week.

Speaking from the library of the Vatican’s Apostolic Palace during his Regina Caeli address last Sunday, the pope said the coronavirus (COVID-19) pandemic has highlighted the importance of “caring for our common home,” and voiced hope that reflections surrounding the “Laudato Si'” anniversary will “help to create and strengthen constructive attitudes for the care of creation.”

One can make a strong case, actually, that “Laudato Si'” provided the template for Pope Francis’ reaction to the coronavirus pandemic.

Since governments began imposing lockdowns in early March, there’s been tension within the Catholic community about the extent to which the Church should push back. Some influential Catholic voices have argued that it’s a mistake for the Church to allow the Mass and other sacraments in effect to be defined as “nonessential,” less important than, say, going to the grocery or the hardware store.

For the most part, Pope Francis has used his influence to urge compliance with the lockdown measures, insisting, as he did in his daily Mass March 12, that the restrictions are for “our own good.”

Granted, Pope Francis hasn’t been entirely consistent; he did compel the Diocese of Rome to backtrack on a decision to shutter churches entirely, on the basis that “not every drastic measure is good,” and once public Mass was authorized to begin again in Italy May 18, he didn’t completely follow the protocols, such as not wearing a mask and gloves.

Still, at critical moments when it seemed the national consensus in Italy might fray, the pope has delivered messages of reassurance and support.

In effect, he was operating from the “Laudato Si'” playbook. It would have seemed odd had the pontiff used that document to exhort action on the basis of a “very strong scientific consensus,” but then defy precisely such a consensus when it began to constrict the Church’s own traditional prerogatives. 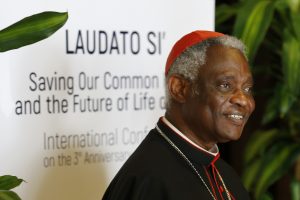 In a communiqué marking the opening of “ ‘Laudato Si'’ Week,” Cardinal Peter Turkson of Ghana, head of the Vatican’s Dicastery for Promoting Integral Human Development and among Pope Francis’ closest advisers, suggested another connection between the coronavirus and the pope’s ecological vision.

As countries begin to envision what a post-coronavirus world will look like, his communiqué read, “Today’s problems call for a vision capable of taking into account every aspect of the global crisis,” adding that the urgency of the climate situation “calls for immediate, holistic, and unified responses at all levels: local, regional, national, and international.”

One can mark the beginning of the rapprochement between science and the religious authority of the papacy at different moments in time: maybe Pope Pius XII’s 1950 encyclical “Humani Generis” (“Of the Human Race”), which declared that nothing in Catholic teaching bars research into the theory of evolution; maybe St. Pope Paul VI’s famous 1969 reflections on the moon landing and the promise of science, maybe St. Pope John Paul II’s 1992 apology for the Galileo affair or his renowned declaration that by now evolution is “more than a hypothesis.”

For that matter, one could go all the way back to the newly elected Pope Pius IX in 1846 reversing his predecessor Pope Gregory XVI’s bans on electric lights and trains in the Papal States, partly on the grounds that such technologies were “modern” and thus irreconcilable with tradition and faith.

Wherever one begins plotting the curve, in two of the greatest global crises Pope Francis has faced — climate change and the coronavirus — scientific consensus has had no better friend than the pope.

As “The Simpsons” rolls into its 32nd season, in other words, the show probably will have to come up with something else to lampoon, at least if it wants to remain rooted in reality.