At last, LA is poised to have the museum it has long deserved: the Academy Museum of Motion Pictures, opening Sept. 30.

No, the Academy Museum of Motion Pictures is just right: a nod to the art form’s august history; an evocation of Hollywood’s rightful place as the heart of it; the reminder that this isn’t just an industry. It’s a craft that requires study, apprenticeship, and dedication.

The museum is billed as the largest in the county devoted to the art and science of movies and movie-making.

Even the venue is perfect: the old May Company on Wilshire and Fairfax, with that fabulous gold-tiled Streamline Moderne cylinder adorning the front, vaguely evoking an Egyptian temple, an Oscar statue, filthy lucre, glittering fame, impossible beauty: the mixture of the sacred and profane that has always defined the silver screen — and all in the shadow of the Hollywood Hills.

The museum comprises 300,000 square feet: the former May Company Saban building and, connected by two pedestrian bridges, a futuristic glass-paneled sphere designed by internationally renowned architect Renzo Piano. There’s a terrace with a stunning view of the mountains, a 1,000-seat theater, a museum store, and a cafe.

The website sets the tone: Everything from the logo — a black-on-gold silhouette of an Oscar — to the luscious technicolor photos straight out of a Douglas Sirk film, to the state-of-the-art interface, spells class crossed with magic.

Under the “Explore” tab, you could spend hours checking out the Academy Awards® History Timeline, with photos, commentary, and videos from 2020 all the way back to 1927, the year the Academy Of Motion Picture Arts And Sciences was founded.

Ditto for “Collection Highlights,” which include a German-made magic lantern from 1890, the typewriter screenwriter Joseph Stefano used to write Alfred Hitchcock’s “Psycho” (1960), and Dorothy’s ruby slippers (one of three existing pairs, apparently). Who knew they were made of leather, silk faille, silk georgette, sequins, rhinestones, bugle beads, and costume jewels? 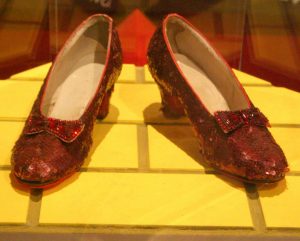 One of the pairs of ruby slippers used in The Wizard of Oz (1939), on display at the Smithsonian Institution National Museum of American History. (Wikimedia Commons)

In fact, there’s a whole exhibit on “The Wizard of Oz” (1939), which seems only right. I grew up pre-digital, and in our family the original movie experience was the annual TV screening of this classic. In those days, you didn’t scroll through a phone and pick what you wanted, on demand, at any hour of the day or night. You caught the latest feature, if you were lucky, at the Colonial or the Ioka, but “The Wizard of Oz” was old even then and we waited a whole year to see it, then hung on every word, committing lines, scenes, and songs to memory.

We seemed to know by osmosis when the time was drawing nigh and started the countdown weeks before. “I’ll get you, my little pretty!” I’d go around the house tittering, like the Wicked Witch of the West. The younger kids would go around with their thumbs hooked into imaginary suspenders, rocking back and forth like sailors and chanting, “We represent the Lollipop Kids.” Even Dad, as he brought up another load of wood from the cellar or ensured the antenna was working OK, could be overheard humming, “If I only had a brain.”

Mom would make popcorn. We’d all hosey our places in the living room. And as the opening credits rolled — a pastiche of roaring wind, “Somewhere Over the Rainbow,” and that woo-woo chorus that spoke of a land beyond — a hush descended very much like the hush that descends in church as the priest raises the consecrated host.

So a Museum of Motion Pictures with temple overtones is just right.

If you’re only passing by, The Saban Building’s Grand Lobby is a soaring, glass-walled gallery with a variety of screens. Here, an introduction to the exhibition “Stories of Cinema” can be enjoyed for free.

“Stories of Cinema,” the core, multifloor exhibition, is devoted to the people both onscreen and behind the scenes who make motion pictures, including narrative films, documentaries, and animation. This is where you’ll find “The Wizard of Oz” gallery, along with sections on, among many others, Orson Welles’ “Citizen Kane” and “Gone with the Wind” — with a special area devoted to Hattie McDaniel, who played Mammy in the film.

Other exhibits include “Hayao Miyazaki,” dedicated to the Japanese animator, director, producer, screenwriter, author, and manga artist; “Highlights from the Richard Balzer Collection,” exploring the way that today’s cinema evolved from a long line of “optical amusements and devices of wonder”; “Regeneration: Black Cinema 1898-1921”; “Backdrop: An Invisible Art”; and The Pixar “Toy Story” 3D zoetrope.

General admission tickets are $25 for adults, $19 for seniors age 62 and up, and $15 for students. Special programs, screenings, and the exhibit “The Oscars® Experience” require a special ticket.

So venture out and take a look. And if you have out-of-town visitors that week, all the better. Show them what we’re made of out here. Show them how the magic begins.