ROME — As Thanksgiving approaches, here’s a holiday scenario which, in some form or another, most families probably have experienced.

There’s a cantankerous uncle in the family who insists on showing up every Thanksgiving, even though many people wish he wouldn’t. He’s loud, he insists on telling everyone what they’re doing wrong, and no matter what happens, he’s always eager to explain why it was better in the old days. Frankly, dad would have disinvited him a long time ago except that grandpa always insisted everyone in the family had to have a place at the table.

Now that grandpa isn’t around anymore, however, dad would dearly love to cut the uncle loose, but for some reason doesn’t quite feel he can say directly, “Get out.” So, he tries every way he can think of to make him feel unwelcome, in the hope that eventually he’ll make himself scarce on his own.

In ecclesiastical terms, something like that scenario appears to be playing out now with regard to Pope Francis and traditionalist Catholics attached to the old Mass.

In July 2021, Pope Francis issued an apostolic letter titled “Traditionis Custodes” (“Guardians of Tradition”), reversing permissions for celebration of the old Latin Mass granted by Pope Benedict XVI and imposing a few new restrictions. Clearly, the idea was to phase out the old Mass and move into a situation in which all Latin-rite Catholics worship according to the post-Vatican II Mass.

In the five months since, however, many traditionalist Catholics have shown a stubborn unwillingness to go quietly into that good night, and have found some bishops willing to grant them whatever latitude remains under the terms of “Traditionis Custodes” to keep the old Mass alive.

Of course, Pope Francis could simply ban the old Mass outright and be done with it. But for now, he appears to be following dad’s strategy above of trying to drop as many hints as possible without explicitly telling anyone they’re not welcome.

That effort appeared to begin in March, when a circular letter regarding St. Peter’s Basilica was issued banning the celebration of individual Masses at side chapels. Since the vast majority of those Masses were conducted in the older rite, in part because of the architecture of the altars in those side chapels, it was widely considered a shot across the bow at traditionalists, making clear the Vatican was serious about enforcing “Traditionis Custodes.”

Last week, the Rome diocese issued its own guidelines for the celebration of “Traditionis Custodes,” which, among other things, prohibits the lone traditionalist parish in the city from using the older liturgical books during Holy Week. The theory, presumably, is that especially during Holy Week, the entire Church should be unified in its worship.

That decision has driven many traditionalists into fits, in part because the parish is part of the Priestly Fraternity of St. Peter, whose raison d'être is the celebration of the older Mass — so that, as they see it, the parish is being told to abandon its identity during the peak liturgical moments of the year. 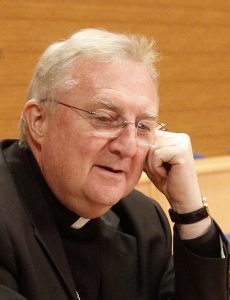 Archbishop Arthur Roche at a book presentation in Rome in 2018. (CNS photo/Paul Haring)

Also earlier this month, British Archbishop Arthur Roche, Pope Francis’ pick to head the Vatican’s liturgical department, sent a letter to Cardinal Vincent Nichols in Westminster, which was eventually leaked, and in which Archbishop Roche asserts that Pope Paul VI “abrogated” the old Mass in use prior to Vatican II. That’s significant because traditionalists have long claimed that St. Pope Paul VI did no such thing, simply approving the new Mass but never abolishing the old one.

Just a few days later Archbishop Roche was at it again, this time in an interview with an Italian-language Swiss television channel. In the exchange, the archbishop said that St. Pope John Paul II and Pope Benedict granted concessions for the use of the older Mass in order to promote reconciliation with the Society of St. Pius X, the rebel traditionalist group founded by the late French Archbishop Marcel Lefebvre. But since that hasn’t worked, Archbishop Roche said, now it’s time to go back to what Vatican II wanted, i.e., a more or less complete transition to the newer Mass approved by Pope Paul after the council closed.

Archbishop Roche got the job of prefect of the Congregation for Divine Worship in part because he was perceived as closer to Pope Francis’ vision than the previous occupant of the post, Cardinal Robert Sarah of Guinea, and it’s reasonable to assume that his comments more or less reflect the pope’s own thinking.

So, what happens now? Does the mettlesome uncle take the hint, and stop showing up at Thanksgiving? Maybe, and some families have had luck with the hint-dropping strategy. Others, however, have found that short of a restraining order, no force on earth will keep a relative away who’s determined to be at the table.

Also like real families, of course, dads do occasionally come and go. At least some traditionalists may figure that eventually somebody else will be carving the turkey, and maybe that dad — that “papa,” or “pope” — will be more open to the old ways.