Is Vatican’s defense of Pope Pius XII also, in some sense, about Pope Francis?

ROME — In what have been known for decades as the “Pius Wars,” meaning debates over the wartime Pope Pius XII and his alleged “silence” on the Holocaust, distinguished American scholar David Kertzer has joined the voices for the prosecution. He brings formidable credentials to the role, as perhaps America’s most prominent expert on 19th- and 20th-century Italy.

Kertzer’s new volume, “A Pope At War,” directly wades into the debates.

In an excerpt published by The Atlantic, Kertzer claims, on the basis of Vatican archival material opened in 2020, to have uncovered secret negotiations between Adolf Hitler and Pope Pius shortly after the pontiff was elected in 1939, which, he believes, foreshadowed a general pattern under the pope of avoiding moral condemnation of the Nazis in exchange for maintaining the power and privilege of the Church. 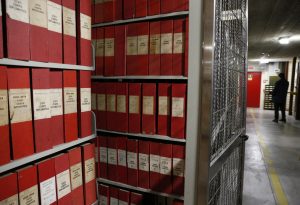 Materials from the pontificate of Pope Pius XII are pictured in the Vatican Apostolic Archives in this Feb. 27, 2020, file photo. The Vatican announced it would put online documentation detailing Jewish people's petitions for help to Pope Pius XII during World War II. (CNS photo/Paul Haring)

Similar arguments have been made before, and they’ve always been criticized by other scholars with a more positive view of the pope’s wartime role. Usually, those analyses are looked upon with favor by official Vatican spokespersons and outlets.

So too this time, as L’Osservatore Romano carried a June 21 response to Kertzer by Matteo Luigi Napolitano, a historian and expert in international relations at the University of Molise in Italy.

In effect, Napolitano accuses Kertzer of inflating the significance of his “discovery” — arguing, first of all, documents about the talks appear in routine diplomatic correspondence, so they weren’t all that secret, and second, that they concerned a fairly mundane matter of whether a 1933 Vatican treaty with Germany could be extended to territories Hitler had recently annexed, including Austria and the then-Czechoslovakia.

In any event, Napolitano points out, the deal never happened because Pope Pius insisted on conditions regarding the freedom of the Church to which Hitler wouldn’t agree.

As for Pope Pius’ conduct during the infamous roundup of Roman Jews on Oct. 16, 1943, Napolitano appears to catch Kurtzer in a fairly serious historical error.

Kertzer cites a report from American envoy Harold Tittman following an audience with Pope Pius, which Kertzer dates to Oct. 19, three days after the deportations, and in which Tittman made no reference to any papal protest — suggesting, to Kertzer, that the pontiff wasn’t overly upset. In fact, Napolitano says, the audience actually took place on Oct. 14, in which case there would obviously be no protest of something that hadn’t yet happened.

Napolitano also notes that a British envoy in Rome notified his home office that on the direct orders of Pope Pius, more than 100 Jews who managed to escape the roundup in the ghetto were sheltered in the headquarters of the Jesuit order, and that nearly every convent in Rome was protecting Jewish families.

All this will have to be adjudicated by other scholars as they sink their teeth into both Kertzer’s book and the reactions it will inevitably generate. In the meantime, two observations suggest themselves.

First, while the Vatican under Popes John Paul II and Benedict XVI appeared determined to defend Pope Pius’ legacy vigorously, in part because he’s a candidate for sainthood, much of the polemics seemed to have died down under Pope Francis, who appeared more inclined to be patient.

Thus the fairly aggressive L’Osservatore Romano piece took some people by surprise, as did the Vatican’s last Thursday of a digitized version of the documents first made available in 2020, which opened by recounting a case in which a Jewish refugee in Spain appealed to Pope Pius for help in being able to exit a concentration camp, and who did in fact eventually reach the United States to join his mother and went on to a career as a chemist.

Why the pushback now?

Some observers are tempted to link the Vatican’s renewed interest in the “Pius Wars” to current debates over Pope Francis’ role in the war in Ukraine, and especially criticism that this pontiff too may be bending over backward not to antagonize a dictator. 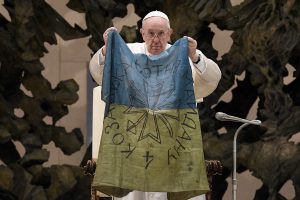 Pope Francis holds a Ukrainian national flag from Bucha during his general audience in the Paul VI hall at the Vatican April 6, 2022. (CNS photo/Vatican Media)

Though Pope Francis has referred to the conflict countless times, it’s true that he has never directly named Russia as the aggressor, nor President Vladimir Putin as the war’s architect. Pope Francis also irked many Ukrainians recently by asserting there are no “metaphysical good guys and bad guys,” and appearing to blame the invasion in part on NATO “barking at Russia’s door.”

The concern, in other words, if not by the pope personally at least among some in his circle, is that, someday, a “Putin’s Pope” book could be done about Pope Francis, ala the infamous 1999 book by John Cornwell about Pope Pius titled “Hitler’s Pope.”

Second, it’s also worth saying that as more information emerges from the recently opened documents, no doubt additional details will be added to the picture, but there’s a sense in which the “Pius Wars” will never be settled on the battlefields of historical research.

That’s because the question at issue isn’t really factual, i.e., “What did Pope Pius do?” In the main, we already know the answer — he tended to avoid public polemics, but he operated behind the scenes to save as many lives as possible while also protecting the freedom of the Church as best he could.

The question, therefore, is instead counterfactual: “What should Pope Pius have done?”

While that’s a fascinating matter to ponder, it requires a moral judgment rather than a historical one, and therefore no “smoking gun” from an archive is ever going to resolve it. People will draw their own conclusions, based in part on historical data but blended with their own outlooks, expectations, and even prejudices.

Whether that’s of any consolation to the people worried now about Pope Francis’ own legacy is hard to say, but perhaps the moral of the story is this: Sometimes a leader simply has to make the best choices he or she can under tough circumstances, and then leave it to others to slug it out down the road over whether all that was enough.