Pasadena native Mary Lea Carroll has written two engaging books on saints. The first, “Saint Everywhere: Travels in Search of the Lady Saints,” (Prospect Park Books, $16) came out in 2019. In it, she travels, among other places, to Siena (St. Catherine), Prague (Infant Jesus) and Medjugorje (Our Lady of Peace).

This year, just in time for Christmas, comes “Somehow Saints: More Travels in Search of the Saintly” (Prospect Park Books, $20). The publisher is based in Altadena, making this small, attractive volume altogether “locally grown.” 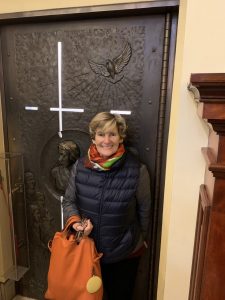 The author at the Holy Doors in Quebec. (Submitted photo)

“Somehow Saints” is no “Pilgrim’s Progress.” Carroll is not the type (nor am I) to undergo the three-day ordeal of fasting, walking barefoot, and prayer known as St. Patrick’s Purgatory; nor to crawl two miles up a hill on her knees to the Shrine of Our Lady of Guadalupe in Mexico City.

To her great credit, in fact, she never pretends to be anything other than exactly what she is: a grateful wife and mother with a beautiful home, a husband retired from a comfortable job, three grown kids, a yard full of rose bushes, and eyelash extensions. She likes boutique hotels, good coffee, fine restaurants, and shopping.

Also to her great credit — and this is what elevates “Somehow Saints” above a mere stocking stuffer — Carroll is a born traveler: comfortable talking to strangers, willing to follow up on possible dead-end leads, always ready for an adventure. She goes out of her way to talk to the people she meets along the way: cabbies, bartenders. She’s curious, persistent, and a genuine seeker.

Take, for example, the first paragraph of the chapter “A Mystic in the Classroom: St. Marie of the Incarnation (1599-1672, Quebec, New France)”:

“Bill and I had just finished an early morning walking tour of Quebec, a city that sits so picturesquely on the banks of the St. Lawrence River. Four hundred years of history whisper and wink through winding alleys and wondrously old architecture. Now, Bill wanted to peel off and chill in our small Hôtel de Vieux. Actually, chill isn’t the right word — we were freezing in the fall temperatures of the Great North. He wanted a warm room and a football game. After we parted ways, I looked around and found that I was standing in front of the stone Chapel of the Ursulines and its 350-year-old elementary school. Five steps away was the contemporary Ursuline Museum. I didn’t know anything about the Ursulines, so I thought, Hey! And went in.”

Don’t let the breezy tone fool you: What follows is a lively and engaging description of the life of a saint who I, for one, had never heard of. 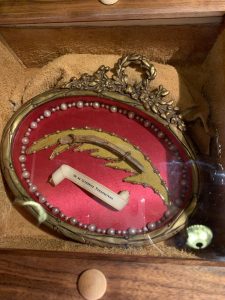 St. Kateri Tekakwitha's arm bone, a relic shown to the author by the women who manage the shrine's gift store. Carroll said, "They brought it out specially for me, saying, 'Father does not usually have it on display, but you have come so far.' I felt very blessed by this." (Submitted photo)

Carroll reads her history, does her research, and distills the information into an informative, accessible, compelling narrative. In 1635, St. Marie of the Incarnation, two fellow Ursuline sisters, their female patron, a Jesuit priest, and two Augustinian nursing sisters endured a three-month, 4,400-mile sea voyage on the “St. Joseph” to arrive in Quebec.

They were the first order of nuns and the first missionaries to arrive in the New World, where they established the first girls school.

And the winter cold was so intense that one account holds the frontier sisters slept in “chests modeled after coffins so they wouldn’t freeze to death. That’s a fun idea!”

Carroll, in other words, never delivers a mere dry recitation of facts. She intersperses the saints’ stories with glimpses of her own quirky Catholic family history. She asks the questions we all ask if we’re honest. What is it with Catholic relics and the mummified fingers, heads, feet? Are Marian visions all a giant hoax? Are bodily mortifications a disguised form of masochism — or one gateway to genuine miracles?

She makes a pilgrimage to Manhattan’s old St. Patrick’s Cathedral, where the Ven. Pierre Toussaint (1766-1853), a Haitian-born freed slave who became a wealthy hairdresser to high-society white women, was originally buried.

She visits the Mohawk Nation Reservation outside Montreal and makes friends with the women who run the St. Kateri Tekakwitha Shrine adjacent gift shop and home-curated museum.

She travels all the way to Venice to see the convent that had been home to St. Josephine Bakhita (circa 1869-1947). Born a slave in Sudan, sold to Arab traders, and viciously mistreated, Bakhita escaped to Italy, converted to Catholicism, became a Canossian sister, forgave her abusers, and then — understandably — was canonized.

Mary Virginia Merrick (1866-1955), a Washington, D.C., native, was paralyzed as an adolescent from a fall from a window. Confined to a wheelchair and in incessant chronic pain, she devoted the rest of her life to sewing clothes for needy children. 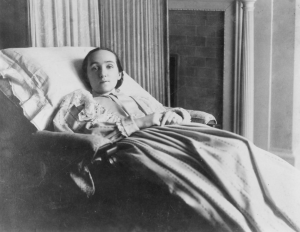 Here’s where Carroll gets to the real question posed by the saints: “[Merrick’s example] just got me to pondering. Why did I let so much time go by when I was in my twenties, cocktail waitressing in that country-western fish house or, for months, lying in the sun on a Greek island. I mean, none of it was wrong, but did I not know that time is finite? Could I not have attempted more?”

Well — couldn’t we have?