In it for the ‘long run’

Each Monday and Thursday, at 5:45 a.m., LA Superior Court Judge Craig J. Mitchell meets his people in front of downtown’s Midnight Mission for a run through the gritty streets of downtown.

By “people,” I mean fellow members of the running club he founded in 2012, and the subject of the 2017 documentary “Skid Row Marathon.” Each year, he takes upwards of 50 people from the homeless missions and shelters of LA, flies them halfway across the world, and brings them to run an internationally recognized marathon.

The documentary profiles four runners — Rafael Cabrera, David Askew, Rebecca Hayes, and Ben Shirley — who end up getting clean, sober, off the streets, and into full, productive lives. During the course of the film, they run a marathon in Accra, Ghana, and another, bigger one in Rome.

When the documentary ends, the club is about to embark for Jerusalem. “We took 44 people from Skid Row,” says Judge Mitchell by way of an update. “Obviously it was very meaningful. Many of our people were baptized or rebaptized in the River Jordan.” 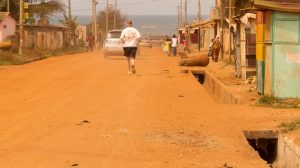 The Club has also run marathons in Vietnam, Ecuador, and the Galapagos. This coming January Judge Mitchell will take 55 runners from Skid Row to Egypt.

At first most of the members were men. Now about half are women. Some are now involved with the LA Tri Club and are training for triathlons.

Saturdays, the club meets at 7 a.m. in Pasadena, for the “long run.”

“It’s so important that we meet on such a regular basis. We share each other’s experiences and lives. It’s not really about running; it’s about creating a community of people who care for one another.”

In addition to recovering addicts, ex-felons, and those who had otherwise lost their way, the club includes lawyers, social workers, and mental health professionals. “These people are instrumental because if you’re living in the Mission or coming off the street, at some point you need to transition into housing, you need a job. One of our guys is now the lead IT guy for LA tourism. This networking is a subplot to the running.”

Anyone can be a member, but the runners who get to go on the trips have demonstrated real commitment. Those who can afford to cover their own costs. Those who still live in the Mission but have an outside job are expected to contribute 500 bucks.

For the rest, every year Judge Mitchell gets on the phone, talks to his friends, crunches the numbers, fundraises, begs.

Meanwhile, five days a week he’s at his post at the Main Criminal courthouse by 8 a.m., where he presides until 5 p.m. or so. Most of the cases he hears carry a potential life sentence: murder, sexual assault, child abuse. 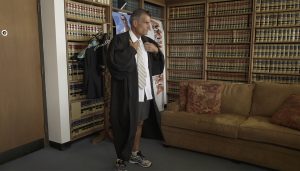 Judge Mitchell, still wearing his running shoes and shorts, puts on his robe in his chambers at the Main Criminal courthouse. (Mark Hayes)

“Do I believe we need to punish people who hurt other people? Yes. Do I believe that if a person has served 20, 25 years for a violent crime and has sincerely rehabilitated, turned their life around, had a conversion of heart, that person deserves a second chance? Yes.”

The judge, 65, is married with three grown sons and as his wife says laughingly in the film, doesn’t spend money on anything! “Running shoes, plane trips. … He wanted to be a priest at one point. I think he still has the heart of a priest.”

When people ask why he spends so much time and effort for no financial return, Judge Mitchell credits first his mother, who taught him early to extend himself for others and died when he was young.

The club’s trip to Rome brings up another mentor: “Pope Francis, many years ago, did essentially the same thing in Argentina. He would take poor people who had never traveled outside of Buenos Aires and give them a holiday, a trip to the ocean. He observed that giving people an opportunity that they would not otherwise have had to travel, to see things they hadn’t seen before, would give them dignity. That word stuck with me. These kinds of opportunities give people dignity. That’s what this is about.”

And just as Christ promised: as ye sow, so shall ye reap.

“I’m a far better judge for the time that I’ve spent with my friends on Skid Row. I get friendship. I get love from people who don’t have a lot of vessels to put that into.”

“As Catholics, we all have to figure out how we are going to live the Gospel. How are we going to take it out of the Church and into the world?”

“My witness for lack of a better word as a practicing Catholic is what I do on Skid Row. I don’t have to wear a rosary around my neck.” 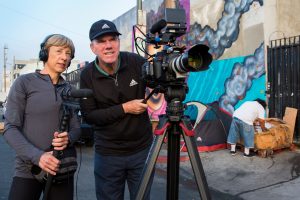 But for the whole glorious story, shell out the $3.99 and watch the award-winning “Skid Row Marathon” yourself. Make sure you have a box of Kleenex handy.

Speaking of which, turns out there’s another pair of unsung saints to this tale: Catholic filmmakers Mark and Gabriela Hayes. “You should talk to them,” Judge Mitchell says. “You know how they got that thing made? They put up 500 grand of their own money.”