In fighting climate ‘war,’ can the Vatican and US play good cop/bad cop with China?

ROME — In a written message to the COP26 summit in Glasgow, Pope Francis compared the twin impact of COVID-19 and climate change to a world war, calling on the international community to respond now “as in the aftermath of World War II.”

“The wounds inflicted on our human family by the COVID-19 pandemic and the phenomenon of climate change are comparable to those resulting from a global conflict,” Pope Francis said.

To be honest, the statement didn’t cause much of a stir amid all the other drama of the Glasgow event, in part because it’s precisely the sort of dramatic rhetoric from Pope Francis on climate change which, by now, has become familiar.

Perhaps the most consistent reaction from a media point of view simply was to underline that the comments came in a written message rather than in person, after Pope Francis had all but vowed to make the trip to Glasgow for the summit. The Vatican still has offered no explanation for his pullout, and, given how palpably Pope Francis seemed to want to make the trip, it leaves one wondering if his recovery from colon surgery over the summer is turning out to be more complicated than anticipated.

Yet it’s worth staying with the pope’s analogy for a moment, in part because of an obvious question it leaves hanging: If this is our generation’s World War II, who are the allies and who’s the axis?

That question, like so many topics about the Vatican these days, leads us by a short path to China.

Shortly after a tête-à-tête with Pope Francis in the Vatican on Oct. 29, U.S. President Joe Biden used his platform in Glasgow this week to scold the leaders of both China and Russia for not showing up. (He was mum about the pontiff’s own no-show, but perhaps after their virtually unprecedented 75-minute exchange, Biden knows more about that story than we do.)

“It just is a gigantic issue and they walked away,” Biden said of the Chinese leadership. “How do you do that and claim to have any leadership mantle?”

“Actions speak louder than words,” foreign ministry spokesman Wang Wenbin said Wednesday. “What we need in order to deal with climate change is concrete action rather than empty words. China’s actions in response to climate change are real.”

Zhang Jun, China’s permanent representative to the United Nations, added sharply, “We are not the ones who withdrew from the Paris Agreement.”

To be honest, this doesn’t sound much like the sort of language allies use in public about one another.

The problem is that if we really are in a war against climate change, it’s a war that can’t be won without China and the U.S. being on the same side. By themselves, China and the U.S. produce twice as much carbon emissions every year than the next eight nations on the top 10 list combined.

For sure, this battle can’t be won without massive efforts by Beijing. In 1979, the year of the “Four Modernizations” under Deng Xiaoping, China was just in fifth place on the annual carbon emissions list, generating fewer than 300 million tons a year; by 2006 China was the world’s worst polluter. 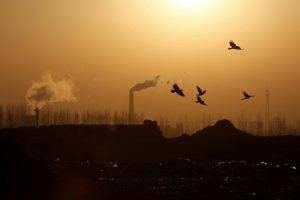 A factory in Tangshan, China, in an undated photo. (CNS photo/Kim Kyung-Hoon, Reuters)

Today, its smokestacks and other carbon-generating machines spew out a staggering 2,777 tons every year, more than a quarter of all emissions on the planet — all of which, of course, amounts to an ironic x-ray of the success of Deng’s economic reforms.

President Xi Jinping has pledged that China’s emissions will peak around 2030, and that by 2060 the country will be carbon neutral. Yet it’s not clear exactly how Xi plans to achieve that aim, and Climate Action Tracker, an international group of scientists and policy experts, has judged China’s efforts to date “highly insufficient.”

If one’s truly serious about winning this war, in other words, China has to join the allies. How to get them to do it?

That’s the $64,000 question of today’s geopolitics, and nobody seems to know the answer. Whatever it turns out to be, however, it likely will have to involve some combination of hard and soft power — the stick of political, economic, and even military pressure, combined with the carrot of moral suasion and a certain restraint about criticizing China in public rhetoric.

(The same could be said of virtually any other objective with China, by the way, from improving its dismal human rights and religious freedom record to avoiding a war over Taiwan.)

As it happens, the U.S. and the Vatican are the world’s most important hard and soft powers, respectively. The U.S. has a limited but real capacity to exert pressure on China, while the Vatican offers China the prospect of acceptance and moral credibility in the international arena.

We may never know if China was discussed by Biden and Pope Francis during the 75 minutes they spent together, though it would be odd if two major world leaders got together these days and the subject didn’t somehow come up.

Assuming it was, perhaps Biden prodded Pope Francis to cash in some of the political capital he amassed with Beijing by approving a controversial deal that gave China significant leverage in the appointment of Catholic bishops in the country.

Perhaps Pope Francis replied that Rome and Washington have an effective good cop/bad cop dynamic in place — though, presumably, without using the argot of American crime dramas — encouraging Biden to continue wielding the stick while he’ll keep dangling carrots.

Whatever the exchange, only time will tell if this de facto partnership works in drawing China into the Allies — to fight what both pope and president clearly see as the last war, in all probability, either man will ever fight.