Immigration as part of God’s plan

Father Raniero Alessandrini, CS, has ministered to immigrants in Chicago, Guadalajara, Vancouver, and LA for more than 60 years. His recently published booklet, “A Dream Come True: Migrants and the Kingdom of God,” outlines the theological underpinnings and sets forth the vision of his life’s work. Self-published by Father Alessandrini, the booklet is available in LA at no cost at St. Peter Italian Church (1039 N. Broadway St., Los Angeles 90012).

The booklet was written under the auspices of the Center for Migration Studies, “an educational, nonprofit institute founded in New York in 1964, directed by Scalabrinian Missionaries, to encourage and facilitate the study of the sociological, demographic, historical, legislative and pastoral aspect of human migration movements and ethnic group relations.”

Since the dawn of human history, Father Alessandrini notes, humans have been on the move: driven by threats, curiosity, the search for food, and any number of other forces. Migration, he notes, could be “interpreted as a restless longing for a fulfilling final experience.”

Welcoming the migrant is the concern of everyone: individuals, society, and the world.

Migrants and refugees, Father Allessandrini believes, identify with Christ’s “lived message” in a special way. As such, they are part of a divine plan meant to help usher in the fulfillment of God’s kingdom.

By God’s kingdom, he means “an ongoing, Spirit-filled reality … leading to universal brotherhood, fulfilled at the end of time.”

“Ongoing” is the operative word. History continues mysteriously to unfold, guided by a “provident, all-encompassing Wisdom.” The kingdom is “an eschatological project, not just in the sense that it will happen only at the end of the world, but in the sense that it has started now but will find its final fulfillment at the end of time, so that we live in a period of ‘already not-yet.’ ”

He emphasizes the common, grace-giving divine presence that accompanies all migrants, whether or not that presence is recognized or named. We’re clear on our own grounding in Christ. We also recognize, along with St. Pope John Paul II, that “The mystery of salvation reaches out to [all people] through the practice of what is good in their own religious traditions and by following the dictates of their conscience.”

In speaking of dialogue, Father Alessandrini is reaching not just for “communicative action,” but rather for the emergence of community.

To that end, he notes the value of shared celebrations: “fiestas of the poor” that spring from shared social status, inner values, the desire to belong, and the hope of building a world of equity and fairness. 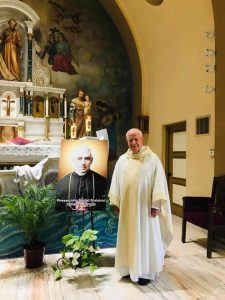 “A Dream Come True” is wholly abstract: no refugee is named, no face or voice described, no story told.

In the chapter “The Migrants,” however, Father Alessandrini considers “the reality of the immigrants under the phenomenon of suffering.” Here he speaks of heartbreak, sorrow, sadness, nostalgia, fear. Here emerge the contemporary strains of the psalmist’s lament: “By the rivers of Babylon we sat and wept when we remembered Zion.”

The hazards of travel; the grief of leaving one’s homeland, family, and friends; the loss of language, culture, landscape, and social status; the legal labyrinth faced in the migrant’s new home: These are forms of terror and anguish that many of us can only imagine, and any one of which has the potential to leave lasting scars.

As Father Alessndrini notes, it’s no accident that “the God of Israel is characterized by being a walking God, a pilgrim God.” Christ himself was a refugee, forced to flee the fury of Herod even as an infant. As an adult, he continued to go from town to town on foot, always on the move, never resting for any length of time. “The foxes have their dens and the birds of the air their nests, but the Son of God has nowhere to lay his head” (Matthew 8:20).

In fact, those who hunger for truth, righteousness, truth, beauty, connection, and forgiveness are always “immigrants,” especially in our wholly secular culture. Such people never have a place to lay their heads.

The immigrant, it seems to me, is thus the visible sign of the exiled condition of all humanity, while simultaneously undergoing a particular and terrible form of martyrdom. The immigrant, in Father Alessandrini’s apt phrase, is the “silent Prophet of the unfolding of the Kingdom.”

“The Church and the world are not two circles simply placed side by side, not intersecting. They are rather a reality of ‘concentric circles’ whose common center is Christ,” Father Alessandrini observes.

Our embrace of the immigrant will be precisely as warm, deep, rich, and total as our recognition that the immigrant is the human face of Christ. Father Alessandrini has staked his life on that face. And the dream, ever so slowly, comes true.