If pope issues the apology Canadians want, will it stick this time?

ROME — At one level, the current press for Pope Francis to apologize for the abuse of indigenous persons at Church-run residential schools in Canada might seem a bit gratuitous, given that another pope already did issue such an apology more than a decade ago.

Pope Emeritus Benedict XVI, who became the first pope in history to apologize for the clerical sexual abuse crisis during a meeting with victims in the United States in 2008, issued the “mea culpa” to indigenous Canadians in 2009.

Pope Benedict met representatives of the First Nations, groups of Canada’s indigenous population, in the Vatican in late April 2009, roughly a year after his trip to the U.S. Though the session itself was private, the Vatican issued a statement afterward indicating the pontiff had delivered the hoped-for apology.

“Given the sufferings that some indigenous children experienced in the Canadian residential school system, the Holy Father expressed his sorrow at the anguish caused by the deplorable conduct of some members of the church and he offered his sympathy and prayerful solidarity,” the Vatican said.

Members of the First Nations groups at the time called the apology historic.

“Today, to listen to the Holy Father explain his profound sorrow and sadness and to express that there was no room for this sort of abuse to take place in the residential schools, that is an emotional barrier that now has been lifted for many people," said Chief Edward John of the Tlazten First Nations.

Phil Fontaine, national chief of the Assembly of First Nations, also said he appreciated the apology.

“I think His Holiness understands the pain that was endured by so many, and I heard him say that it caused him great anguish,” said Fontaine. “I also heard His Holiness say that the abuse of the nature that was inflicted on us has no place in the Church; it’s intolerable.”

“What I heard,” Fontaine added, “it gives me comfort.”

It was also praised by the prelate who represented the Canadian bishops in the session, Archbishop Gérard Pettipas of the Archdiocese of Grouard-McLennan.

“It was important to hear from the one person who does speak for the Catholic Church around the world, to hear him say ‘I am sorry. I feel for what you people have suffered. We hope that we can turn the page and move toward a better future together,’ ” he said. 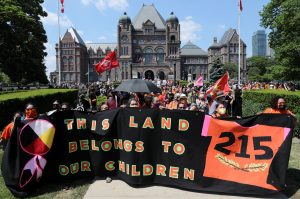 Protesters take part in a march from the Ontario provincial legislature in Toronto June 6, 2021, after the remains of 215 children were found on the grounds of the Kamloops Indian Residential School in May. (Chris Helgren/CNS, Reuters)

It was well known a decade ago that more than 150,000 native Canadian children had been compelled to attend these residential schools from the mid-19th century through the 1970s, that for most of that time the schools had been run by the Catholic Church, and that physical and sexual abuse had been rampant. Thus Pope Benedict was issuing a blanket apology for the whole sorry story, while unambiguously recognizing the Church’s role in it.

Given that history, how does one explain the recent press by indigenous Canadians for more apologies, including one from the pope, which they now hope will come in a Dec. 17-20 audience with Pope Francis announced this week by the Canadian bishops?

Equally, how do we explain the public demand for an apology by Canadian Prime Minister Justin Trudeau, who claimed the Church has been “silent” and “not stepping up”? Surely someone in the Canadian government, or the country’s bishops’ conference, could gently point out that his claims of silence aren’t quite right?

For one thing, 12 years ago is a long time, and it’s possible that not only the emotional impact of Pope Benedict’s apology has faded but the very memory of it in some quarters. The fact that Pope Benedict’s papacy generally had a reduced public and media profile may play some role.

For another, we didn’t know in 2009 that the suffering of native children for more than a century included not merely physical and sexual abuse, but also deaths amid neglect and obscurity.

That reality was brought home by the recent Kamloops discovery earlier this year, when the remains of some 250 children, unceremoniously placed in what amounts to a mass grave, were found on the grounds of what had been the country’s single largest residential school. Since that discovery was made in late May, the finding of remains on the grounds of other residential schools has also been reported.

The past 12 years have also, of course, witnessed the further unraveling of the Catholic Church’s public standing due to further revelations of various sorts of abuse, combined with the sometimes anemic and unconvincing efforts of Church authorities to come to terms with that past.

All of that makes Pope Francis’ mid-December session with members of three different Canadian indigenous groups — First Nations, the Metis, and the Inuit — which will include elders and Knowledge Keepers, residential school survivors, and youth from across the country, especially fraught.

No doubt Pope Francis will deliver the desired apology, as Pope Benedict did before him. In this case, the session will stretch over a full three days, with the pontiff meeting each group of indigenous individually before bringing everyone together at the end, and it strains credulity that the Vatican would have agreed to such a format without believing the pope will deliver.

Will the apology stick this time? Perhaps, in all likelihood, it depends in part on how many more gruesome revelations the future holds, and therefore how much previous apologies fade from memory in the harsh light of new truths.