ROME — Since his election in 2013, Pope Francis has garnered global attention for his defense of the poor and marginalized, as well as his gestures of tenderness and mercy toward the vulnerable.

Pope Francis has become a champion of the underdog and has gone out of his way to shed light on those relegated to life’s peripheries. He has visited the poor and the disabled, met with victims of trafficking and clerical sexual abuse, and caressed the feet of prisoners and the faces of the disfigured.

This side of the pope was on full display during his July 24-30 visit to Canada, where he issued a historic apology for the Church’s role in the country’s systematic effort to assimilate indigenous persons into Western culture through its residential school system.

Children were forcibly removed from their families and enrolled in the schools, where they were often punished for speaking their native languages. Students endured physical, psychological, sexual, cultural, and spiritual abuse.

In total, around 150,000 children of the First Nations, Métis, and Inuit Peoples were forced to attend the schools, many of which were run by Catholic missionary orders and other Christian churches, including the Anglican church.

The system operated from the 1870s until 1996, when the last school was closed.

Survivors of the residential schools have called the system part of a “cultural genocide” and say the experience has left deep generational scars. 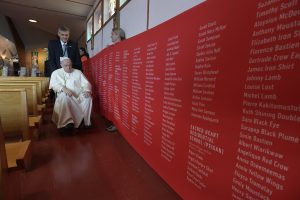 Pope Francis prays in front of a banner bearing the names of each of the 4,120 Indigenous children and the residential school where they died, in this photo from his visit to in Maskwacis, Alberta, July 25, 2022. (CNS photo/Vatican Media)

After landing in Edmonton from Rome on July 24, the pope traveled to the former Ermineskin residential school in Maskwacis, Alberta, where he met with members of the First Nations, Métis, and Inuit communities.

In his speech, the pope said the first step of his journey to Canada was “that of again asking forgiveness, of telling you once more that I am deeply sorry.”

He then apologized “for the ways in which, regrettably, many Christians supported the colonizing mentality of the powers that oppressed the indigenous peoples.

Pope Francis asked forgiveness for the cooperation of the Catholic Church — especially members of religious communities — “in projects of cultural destruction and forced assimilation promoted by the governments of that time, which culminated in the system of residential schools.”

Christian faith, he said, “tells us that this was a disastrous error, incompatible with the Gospel of Jesus Christ.”

The apology follows an initial mea culpa Pope Francis made in March, when a group of Canadian indigenous delegations visited the Vatican for a series of individual and collective meetings. After survivors shared their experiences, Pope Francis apologized for the Church’s “deplorable conduct” in the residential schools. 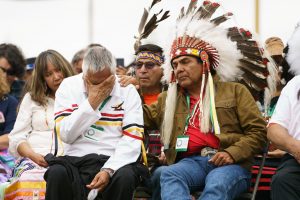 A man is comforted by an Indigenous leader during ceremonies in Maskwacis, Alberta, July 25, 2022, where Pope Francis apologized to Canada's native people on their land for the church's role in schools where Indigenous children were abused. (CNS photo/Adam Scotti, Prime Minister's Office handout via Reuters)

His visit to Canada was intended as a continuation of this process of healing and reconciliation. It fulfills one of the “Calls to Action” issued by Canada’s Truth and Reconciliation Commission, which requested that the pope make an apology on Canadian soil.

This papal trip differed from others in the sense that the pope’s decision to go was driven almost entirely by the need to make an apology, rather than for a separate ecclesial or diplomatic agenda.

Though he was greeted by Canadian Prime Minister Justin Trudeau upon his arrival at Edmonton International Airport, Pope Francis did not meet with the country’s authorities until Wednesday, his third full day in Canada. Typically, the pope meets with heads of state at the start of a trip.

In his speech to civil authorities and indigenous representatives on July 27, Pope Francis reiterated his apology, voicing his “deep shame and sorrow” for the Church’s past mistakes, and again asking forgiveness “for the wrong done by so many Christians to the indigenous peoples.”

“It is tragic when some believers, as happened in that period of history, conform themselves to the conventions of the world rather than to the Gospel,” he said.

While noteworthy and certainly of historic significance, this is hardly the first time a pope has apologized for something.

During his first trip outside of Italy in 1964, St. Pope Paul VI visited the Holy Land, where he held a historic meeting with Orthodox Patriarch Athenagoras of Constantinople. Though Pope Paul did not verbalize a formal apology, his presence there and the symbolism of the meeting was in itself taken as a de facto apology for centuries of hostility following the split between Eastern and Western Christianity in 1054.

St. Pope John Paul II took papal apologies to another level, as they became an almost routine feature of his papacy. His most famous apology was made during the Great Jubilee of 2000, when he presided over a “Day of Pardon” liturgy in St. Peter’s Square in which he famously asked forgiveness from Jews, women, Muslims killed by Crusaders, and people convicted by the Inquisition.

Pope Benedict XVI also made apologies during his eight-year reign, not only for the mistakes of the past, but also for ones committed during his tenure.

Most prominently, Pope Benedict was the first pontiff to apologize in a personal capacity to victims of clerical sexual abuse during a visit to the United States in 2008. He also famously apologized to the world’s bishops in 2009 for mishandling the lifting of the excommunications of four traditionalist bishops, one of whom turned out to be a Holocaust denier. 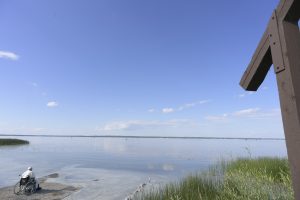 Pope Francis visits the lake as he participates in the Lac Ste. Anne pilgrimage and Liturgy of the Word in Lac Ste. Anne, Alberta, on July 26. (Vatican Media)

But Pope Francis’ apology in Canada for the Church’s sins in the residential schools stands out for the poignant language he used to describe the Church’s errors.

Not only did he decry the “colonizing mentality” of the schools and their “projects of cultural destruction,” he said the “catastrophic” impact of the schools was un-Christian, and amounted to “a disastrous error, incompatible with the Gospel of Jesus Christ.”

Calling the residential schools a “deplorable evil,” he said the Church now “kneels before God and implores his forgiveness for the sins of her children.”

As someone known for his gestures and for the visible symbolism of his words and deeds, Pope Francis put the Church’s face of mercy on full display with Canada’s indigenous communities during his midsummer visit.

Pope Francis shines when he is with and among people who have been victimized, marginalized, brutalized, and abandoned, and the trip to Canada was no exception. In fact, this trip has only cemented that image, and will likely go down in Church history as part of his legacy as the “pope of mercy.”