For the last two decades, the United Nations has set aside 16 days dedicated to raising global awareness of the violence endured by women and girls around the world and to galvanize local and global initiatives to stop it.

The campaign begins on Nov. 25, which the U.N. has declared “International Day for the Elimination of Violence against Women” and concludes on Dec. 10, known as “Human Rights Day.”

The latest statistics from the World Health Organization (WHO) reveal that 30% of women aged 15 years or older have been subjected to physical or sexual violence, while 26% of them have suffered intimate partner violence. While violence against women comprises a wide range of actions, from verbal harassment and other forms of emotional abuse, femicide — the intentional murder of women because they are women — is its most egregious form.

The context of the U.N.’s involvement in this issue has Catholic roots. On Nov. 25, 1960, three Catholic sisters from the town of Ojo de Agua in the Dominican Republic were murdered under the dictatorship of Rafael Trujillo for their resistance. Trujillo had consolidated control of the country’s economy, siphoning profits to his own family and supporters, while deploying secret police to imprison, torture, kidnap, and rape women as a method of rooting out dissenters.

Patria, Minerva, and Maria Teresa Mirabal, along with their husbands, joined an underground resistance movement. In 1960, Patria presided over a clandestine insurrection in 1960 known as the 14th of June movement. Minerva suffered imprisonment on four separate occasions. But their brutal assassination, known as the “Inolvidable Mariposas” (“Unforgettable Butterflies”), propelled a wider resistance movement in the country, which ended the dictatorship in 1961. 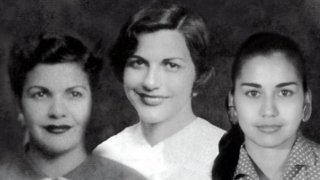 The struggle of the Mirabal sisters for justice and human rights in their country was recounted in poems, songs, and books that transformed them into symbols of inspiration to others around the world. Their witness eventually led the U.N. to adopt Nov. 25 as an international day of observance in their memory.

In our day, context is just as important in order to develop the most effective course of action. The COVID-19 pandemic has accentuated weaknesses in the effort to stop systemic violence perpetrated against women. Resources for victims of gender violence like crisis centers, helplines, and shelters with safe accommodation now face funding cuts and staff shortages. Moreover, lockdowns have contributed to an increase in women’s experiences of and fears of sexual and physical violence in public spaces and in modes of public transportation.

Refuge, the largest domestic abuse charity in the United Kingdom, reported a 700% increase in calls in a single day while a separate helpline for perpetrators seeking to change their behavior reported receiving 25% more calls since the pandemic lockdown.

In Mexico, the rate of femicides has doubled over the past five years, most of which are particularly brutal crimes, and astonishingly, perpetrators enjoy systemic impunity. In 2018, about 93% of crimes in Mexico, including gender violence, went unreported or were never investigated.

On March 9, 2020, just days before the initial COVID-19 lockdown, tens of thousands of Mexican women took part in a nationwide walkout from their schools and jobs. Their campaign, #UnDiaSinNosotras (“A Day Without Us”), challenged the Mexican government’s indifference. This year, on International Women’s Day, female protesters wrote the names of hundreds of femicide victims onto the fence barriers surrounding the national palace in Mexico City.

So what can Catholics in the U.S. and around the globe do to stand in solidarity with women who are demanding social change?

A first action step would be to raise funds for organizations that promote early intervention domestic violence programs. Lay groups can also provide assistance to women and girls seeking shelter and safety and provide support to those who are seeking help in behavioral change or overcoming substance abuse, often linked to violent behavior.

The Church can also follow the lead of secular groups that are at the forefront. For example, a civil organization in Argentina, Women’s Space Foundation, used aid from the U.N. to purchase mobile phones to expand counseling services and held online training for front-line workers on the prevention of child abuse. They also shared strategies for helping women to report violence.

Serious and sustained efforts are needed to ensure that governments follow through with effective policies for preventing and mitigating femicide and gender violence. 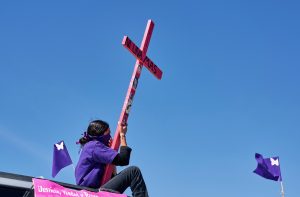 A woman holds a cross atop a vehicle during a caravan in Ciudad Juarez, Mexico, March 7, 2021. Protesters were demanding an end to violence against women and femicide. International Women's day was celebrated March 8. (CNS photo/Mahe Elipe, Reuters)

Catholic social teaching affirms that solidarity “is not a feeling of vague compassion or shallow distress at the misfortunes of so many people, both near and far. On the contrary, it is a firm and persevering determination to commit oneself to the common good; that is to say to the good of all and of each individual, because we are really responsible for all. This determination is based on the solid conviction that what is hindering full development is that desire for profit and that thirst of power. …” (“Sollicitudo Rei Socialis”) (“The Social Concern”), n. 38, Dec. 30, 1987).

St. Pope John Paul II reminds us that attitudes of greed and dominance, the “structures of sin” that perpetuate oppression and social injustice, are only conquered (presupposing the help of divine grace) by a diametrically opposed attitude­ — a commitment to the good of one’s neighbor with the readiness to “lose oneself” for the sake of the other.

On this Nov. 25, our actions should demonstrate our understanding that women’s health and safety are inextricably tied to the true wealth and well-being of all nations.

Jennifer Lim is an LA-area immigration lawyer and recent convert to Catholicism.