Pope Francis prays for an end to violence in Afghanistan

As Taliban insurgents were entering Kabul and the United States evacuated its embassy personnel from Afghanistan, Pope Francis on Sunday called for dialogue to end the conflict so that locals can live in peace, safety, and with mutual respect.

“I join in the unanimous worry about the situation in Afghanistan. I ask you to pray along with me to the God of peace so that the clamor of weapons ends and that solutions can be found around a table of dialogue,” Francis said to the thousands of pilgrims in St. Peter’s Square.

“Only this way can the martyred population of that country – men, women, elderly and children – return to their homes and live in peace and security in full reciprocal respect,” he said.

Francis’s words came at the end of his Sunday Angelus prayer, and as news from Kabul spoke of the Taliban entered the capital on Sunday morning.

Personnel were evacuated from the U.S. embassy as Afghan nationals lined up at ATMs to withdraw their life savings.

The Taliban have also been accused of summarily executing people they accuse of collaborating with the government, and reimposing the harsh rule that marked their 1996-2001 rule of the country.

Images shared on social media by reporters based in Kabul showed window ads depicting women in bridal dresses or showing their hair being painted over, furthering the fears that the Taliban had put an end to the 20-year Western experiment aimed at building a new, more tolerant Afghanistan.

Kabul is preparing for Taliban. pic.twitter.com/h2NKF4y22K

According to The Associated Press, the Taliban seized nearly all of Afghanistan in just over a week, despite the hundreds of billions of dollars spent by the U.S. and NATO over nearly two decades to build up Afghan security forces. Just days earlier, an American military assessment estimated it would be a month before the capital would come under insurgent pressure.

Instead, the Taliban swiftly defeated, co-opted, or sent Afghan security forces fleeing from wide swaths of the country, even though they had some air support from the U.S. military.

It has been confirmed that Afghan President Ashraf Ghani has fled the country. 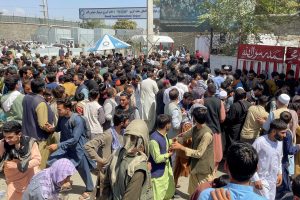 People try to get into Hamid Karzai International Airport in Kabul, Afghanistan, Aug. 16, 2021. During his Angelus address Aug. 15, Pope Francis expressed his concern for Afghanistan amid the Taliban's control of the country. (CNS photo/Reuters)

Taliban frontline commanders and foot soldiers have told a BBC reporter that they are determined to reimpose their version of Sharia law, which would include stoning for adultery, amputation of limbs for theft and preventing girls from going to school after the age of 12.

This means that the tens of thousands of women who in the past two decades felt emboldened to go to get an education, become professionals or walk on the streets not accompanied by a man, now fear for their lives.

At the end of the Angelus address, Pope Francis also called for prayers for Haiti, where a violent earthquake on Saturday caused hundreds of deaths and thousands of wounded – including Cardinal Chibly Langlois, who was hurt but is reportedly now out of danger. The country is still struggling to recover from the devastating earthquake of 2010.

“I want to express my closeness to the dear people hard hit by the earthquake,” Francis said. “While I lift up my prayer to the Lord for the victims, I extend my word of encouragement to the survivors, hoping that the interest of the international community to help might move toward them. May the solidarity of all alleviate the consequences of the tragedy!”

“The days of the Full of grace were not all that striking,” he said. “They followed one after the other, often exactly the same, in silence: externally, nothing extraordinary. But God’s gaze was always upon her, admiring her humility, her availability, the beauty of her heart never stained by sin.”

According to the pope, “this is a great message of hope for us. For you, who live the same exhausting and often difficult days. Let us celebrate her today with the love of children, animated by the hope of one day being with her in Heaven.”