ROME — New Yorkers awoke on New Year’s Day 2020 to news that the family of one of the victims in the recent stabbing attack at a rabbi’s home during Hanukkah had released a statement saying his condition is “dire” and doctors don’t expect him to regain consciousness.

The machete used in the assault apparently penetrated 71-year-old Josef Neumann’s brain and shattered his right arm. If he does succumb to his injuries, Neumann would become the first fatality in the incident that left four other people injured.

The Monsey, New York hate crime is a reminder, as if one were needed, that anti-Semitism is alive and well in the early 21st century. It came amid a spate of at least eight attacks on Jews in New York in December.

No doubt, Catholic pastors in New York will be spending a lot of time in pulpits over the next few weeks reminding people of the Church’s own path in firmly repudiating anti-Semitism, including the historic document “Nostrae Aetate” (“In Our Time”) of the Second Vatican Council and its declaration that the Church “raises her voice in loud protest against all wrongs done to Jews, whether in the past or in our time.

“Whoever despises or persecutes this people does injury to the Catholic Church,” it said.

This would be an apt moment to remember the great heroes of Catholic-Jewish relations over the last century, including the late German Cardinal Augustin Bea, SJ, who became a close friend of the famed Chief Rabbi of Rome at the time, Elio Toaff, and together the two men modeled a new kind of relationship.

For American Catholics, Cardinal Bea’s legacy is keenly relevant right now, as is that of the late Dutch Cardinal Johannes Willebrands, who oversaw implementation of Vatican II’s teaching on Jews and Judaism as president of the Vatican’s Commission for Religious Relations with the Jews from 1969 to 1989.

The anguish created by the Monsey attacks may create a moment in which the memories of such pioneers can be revived and preserved, rather than being lost to the passage of time.

As they do all that, however, Catholics in New York and across America might also want to consider who else has a call on their sympathy and solidarity, because American Jews are not the only victims of religious hatred at the moment.

It’s instructive to watch the reaction of Jewish leaders to the Monsey attacks, who’ve been extremely vocal in calling attention to the dangers of anti-Semitism and demanding a more aggressive response from public authorities.

On Sunday, for example, four Jewish elected officials in New York asked Gov. Andrew Cuomo to declare a state of emergency and to deploy the National Guard to “visibly patrol and protect” Orthodox Jewish neighborhoods. Cuomo, a Catholic, has already declared the attack “domestic terrorism” and ordered stepped-up police patrols. 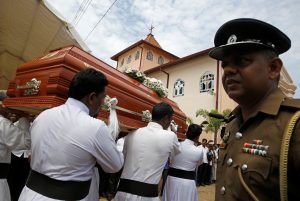 Pallbearers carry a casket into a Catholic church for a funeral Mass for victims in Negombo, Sri Lanka, April 23, 2019, two days after a string of suicide bomb attacks on churches and luxury hotels across the island. (CNS photo/Thomas Peter, Reuters)

Yet ironically, Christian leaders, Catholics very much included, rarely seem to generate the same kind of heat when their fellow Christians are targeted.

Just days ago, to take merely one example, a Catholic bride-to-be and her entire bridal party were beheaded by suspected Boko Haram insurgents in northeastern Nigeria, part of an ongoing campaign of violence in Africa’s most populous state that’s made it one of the world’s most dangerous places to be a Christian.

Meanwhile, the lone native-born Catholic priest in Bhutan told Crux that he was struggling to guide his small flock through the Christmas season without making too much noise, because Christians in the majority-Buddhist nation are viewed with suspicion.

Bhutan’s aggressive strain of Buddhist nationalism makes it impossible for Christians even to build churches or worship in public, forcing them into a kind of catacombs faith.

Those are simply two recent cases drawn from a lamentably vast galaxy of such incidents, in which Christians around the world suffer both violent assault and structural, government-sanctioned repression, along with a dizzying variety of other forms of harassment.

Overall, more than 200 million Christians are believed to be at risk for religious violence and persecution, and the number of new Christian martyrs every year is estimated at somewhere between 100,000 and 8,000, depending mostly on what counts as specifically “religious” violence.

Granted, this anti-Christian hostility for the most part isn’t unfolding in the United States, which undoubtedly goes a long way toward explaining the relative silence of American Christian leaders. Theologically, however, that’s no excuse, since the bonds of baptism are supposed to be every bit as strong as national identity and loyalties.

As a practical matter, Americans have the world’s biggest megaphone, and if U.S. Christian leaders don’t beat the drum about the threats their coreligionists face, it’s hard to imagine who else might do it.

While American Catholics grapple with the fallout from the horrors of Monsey, therefore, it might be a good moment to take stock of the broader landscape of religious hatred in the early 21st century, and to ponder where an incisive Catholic contribution might make a difference.

Perhaps this generation can produce its own Cardinals Bea and Willebrands, with the dedication and imagination to lead a similar Catholic “great awakening” in defense not only of Jews, but all victims of religious bigotry and oppression. Certainly, embattled fellow Christians around the world likely would appreciate the effort.