The Actors’ Gang Theater is currently presenting “We Live On,” a three-part live virtual production based on the 1970 classic “Hard Times” by Studs Terkel.

Tim Robbins adds additional text and directs. The series runs through Sept. 4 and is being offered to the public with a pay-what-you-can admission.

Each of the three parts presents 10 stories from the Great Depression and stands on its own. With music by Cameron Dye and David Robbins, this world premiere features stories by, among others, labor activists Dolores Huerta and Cesar Chavez, and Catholic Worker co-founder Dorothy Day. 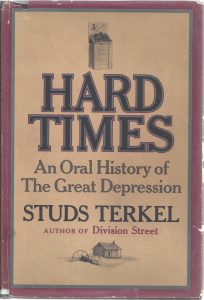 The first edition of "Hard Times" by Studs Terkel. (Amazon)

What was their experience of the Great Depression? How did they make it through? What reserves of resilience, courage, and integrity did they call upon? Terkel, who liked to call himself “a guerrilla journalist with a tape recorder,” asked questions. He listened. And he wrote down the stories of those who would otherwise have remained anonymous, overlooked, and forgotten.

Robbins began to wonder: What relevance do the stories have to us today, with our legions of homeless, a population traumatized by COVID-19, the political polarization, the desperation, the ever-widening gap between rich and poor?

The stories are a mix of those documented by Terkel and original stories from the family histories of various cast members.

Says Robbins: “As actors, I think it’s important to find this kind of material to wrestle with. I’m blessed to have a company of actors that understand not only the importance of getting to the truth of difficult subject matter but also, in this challenging time of being apart, getting to that truth in community with each other.”

You might experience a teeny bit of cognitive dissonance at first, as actors with excellent makeup, hair, and teeth read from their well-appointed homes about people who didn’t have enough to eat.

But the stories are so compelling, the performances so top-notch, and the labor and heart poured into the project so obvious, that you’re soon immersed.

The characters themselves are vitally alive, and their stories crammed with interesting facts: the distinction, for example, between a hobo, a tramp, and a bum.

Labor activist Cesar Chavez (left), played by Robert Chavez (right), who was moved to action by the targeted mistreatment of fieldworkers that he witnessed as a child in the Great Depression. (The Actors’ Gang)

Heartbreakingly, when poverty struck, many of those interviewed by Terkel blamed themselves. Of the many men who threw themselves out of top-story windows in response to the Crash, some survivors ask incredulously, “Over money?” Others sympathetically note that the men felt like failures in front of their wives and children.

One woman recalls her mother making “water cake”: flour, sugar, water. Another recalls a single precious coat that served variously as protection from the cold, a blanket, and a pillow.

In highlighting the hardship of migrant laborers, the stories of 28 formerly anonymous “deportees” are unearthed.

There were plenty as well who saw in the Depression the opportunity to make a fortune, adopting a “coyote mentality.” Day laborers were paid 15 cents an hour to wash dishes, haul garbage, peel potatoes, and cut asparagus.

A Chicago news story reported that society matrons planned to wear outfits worth thousands of dollars to the Beaux Arts Ball: One gown was sewn from $1,000 dollar bills. Fan dancer Sally Rand’s response was to arrive at the ball naked, Lady Godiva-style, as a form of protest.

We’re invited to ponder the morality of submitting to be cogs in an immoral system. Observes Robbins: “The actors tried hard not to glorify or romanticize, on the one hand, nor to condemn or judge on the other.”

The United Auto Workers, the United Farm Workers, and many others struck.

Cigar-makers used to pitch in a quarter a week and hire a reader, who would sit on a raised platform in the workroom and for up to four hours a day, treat the workers to serials, newspapers, novels: Cervantes, Shakespeare, Dickens. When the factory owners, for no good reason, removed the platform and ejected the readers, those workers, outraged, also struck.

Some survivors, decades later, were spendthrifts; others, all their lives, would count every penny.

Some, still alive today, maintain that, having lived through the Depression, nothing much can faze them. A pandemic? No sweat.

Robbins co-founded The Actors’ Gang in 1981 and has served as artistic director ever since. The theater company has mounted more than 150 productions and garnered more than 100 awards. In addition to Robbins, the ensemble has included such well-known actors as Jack Black, John Cusack, Helen Hunt, and John C. Reilly.

And if you can’t watch the show(s) — by all means, read the book.