Going to the source of the Sriracha success story

You’ve seen the plastic bottles. They’re filled with bright red sauce, emblazoned with a rooster, stamped with text in English, Spanish, Vietnamese and Chinese, and topped by a green squirt cap. For many, this blazing hot chili product is a staple condiment.

Enter David Tran, CEO and founder of Huy Fong Foods. In 1979, Tran fled communist Vietnam on a Taiwanese freighter named Huey Fong. “I didn’t have a plan,” he says. He came to the U.S. because we were the only place that would have him. He ended up naming his Sriracha empire after that boat.

He washed up in the LA area and decided to try his hand at hot sauce.

He was born in 1945, the Year of the Rooster. So he bought a blue Chevy van, stenciled his own rooster logo on the side, and drove his first bottles to Asian restaurants and markets around town.

Back in 2013, some of Tran’s Irwindale neighbors raised a bit of a fuss over what they characterized as the pungent odor emanating from the factory. Tran sprang to action, developed a secret air-filter system to correct the problem, and to further demonstrate his community goodwill, began to offer free tours.

These are given in English (Spanish and Mandarin upon request) and are available Monday, Tuesday, Thursday, and Friday, at 10 a.m., 12:30 and 2 p.m.

There’s plenty of parking. Security is tight. The screening room has scrapbooks and laminated blowups relating to the history, production, and fan base of Sriracha sauce.

In the introductory video, we learn that the name of the sauce comes from a town in Thailand — Sri (alternatively, Si) Racha, where chiles are grown. Capsaicinoids are the chemical compounds found in peppers that trigger the intense heat rush to which Sriracha sauce devotees are well-nigh addicted (“I put Sriracha on my Sriracha,” reads one popular T-shirt).

We met Tran on-screen. He has never raised prices: “I didn’t do things first of all for the money.” He does not advertise: Demand already exceeds supply. He makes no money from the massive quantities of Sriracha merch that are sold by the folks to whom he sells the trademark.

As for the recipe, “It’s simple!” Tran throws up his hands. “No secrets!” The sauce is made from fresh-ground red jalapeño chili peppers, salt, vinegar, sugar, and garlic. Two preservatives, potassium sorbate and sodium bisulfite, are added, as well as xanthan gum. 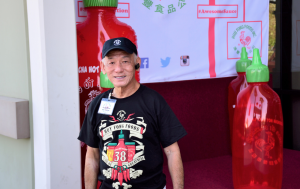 Donning red shower caps, we then board the jitney for the tour.

Inside, the plant is spotlessly clean. Our first stop is the “magical warehouse.” Fifty-five-gallon blue bins are stacked six layers high.

We’re given Kleenex in case our eyes started watering, which provokes great merriment among the many youngsters in our group. Some stick wads up their noses and leave the streamers hanging, pointing at one another and shrieking with laughter. Others make makeshift masks, solemnly clamping them to their faces as if in fear of air-borne chili contamination.

The chilis come from California, New Mexico, and Mexico. Upon arrival, they’re immediately sorted, washed, rinsed, and ground, then piped to the mixing station, where the other ingredients are added to make a base.

At the drum-filling station, the base is loaded into the blue barrels and conveyed to the storage area to await being used in one of the company’s three chili sauces: Sriracha, Chili Garlic and Sambal Oelek.

At one station, we watch as a jumble of bottles are fed into a machine, spat out in an orderly row, efficiently fed into a circular spiraling carriage belt, and emerge filled with red sauce and topped off with a green cap.

At another, automated machines load stacks of boxes onto revolving pallets, forming 105-box blocks that are then encased top to bottom in shrink-wrap.

From there, the boxes travel back to the warehouse and sit for 35 days (state law), and are then shipped throughout the U.S. and dozens of foreign countries. The plant can produce up to 18,000 bottles an hour.

Tran devised all the plant’s production elements, including an ingenious three-layer conveyor belt that transfers the barrels of base, then brings them back empty to be washed and sterilized.

The building is lit by skylights, thus conserving electricity. And with no A/C, the factory circulates with fresh air and is cool at all times, even when the temperature outside tops 100 degrees: another Tran invention.

“He made a miracle from God!” one of the kids exclaims as the tour comes to a close.