Getting back to the business of life

Death has been much on everyone’s minds lately. Our own, possibly. The deaths of those who have fallen to the coronavirus (COVID-19). Death in general.

Cemeteries were one of the first public places upon which restrictions were lifted. As of mid-May, the archdiocese’s 11 Catholic cemeteries were open for visitation Monday through Saturday from 4 p.m. to 6 p.m., and Sundays from 8 a.m. to 6 p.m.

The news came as a comfort to many. And since the communion of saints — the spiritual union of the members of the Christian Church, living and the dead — is about as close to Mass as we can get now, last week I thought to visit Resurrection Cemetery in Rosemead.

Which, if you’ve never been there, is a massive green space of rolling hills in the middle of the city, with views of the San Gabriel Valley and Mountains to the north. It has shade trees, benches and statues of saints. It has tucked-away sections and a mausoleum and a visitor’s center, and enough paved road so you can take an actual hourlong walk.

I don’t know anyone who’s buried there, but that didn’t matter.

People often ask me to pray for them. I take such requests seriously, and if at all possible, I try to go a teeny bit out of my way. I’ll walk the half-hour to a nearby church and pray a rosary in the Mary grotto there, for example, or the Stations of the Cross.

So that’s what I did at Resurrection Cemetery.

A man in work boots, skin weathered by the sun, tenderly clipped the grass around a gravestone. Women unwrapped snacks, corralled kids, smoothed blankets on the grass. A father, mother, and little daughter had set up shop beneath an umbrella, ranchera music playing softly from their car radio.

Strolling along in the sun, pesky mask in place, I waved at anyone whose eye I could catch, or said “Hey,” and failing that, greeted everyone silently.

A group of teens, one with bright blue hair, streamed across the lawn with pots of pink azaleas. A couple of guys on lowrider motorcycles tooled in. A few minutes later I saw them, helmets off, heads bowed over a stone, discussing how to place their several bouquets of flowers.

All around, people knelt by the graves of mothers, fathers, sons, daughters, uncles, aunts, grandmothers, and grandfathers, friends. 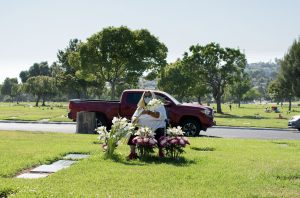 A woman tends to flowers at a grave in Resurrection Cemetery May 27. (JohnMichael Filippone)

I thought back to the first Mass I’d attended as a sincere seeker, a worshipper.

It was a weekday noon Mass, in the mid-1990s, at St. Basil’s in Koreatown. I’d been raised Protestant. But to see people of all ages, races, and demographics kneeling, before an altar, in the middle of a bustling city and the middle of the day, was that first time a shocking sight. The intimacy was such that I almost thought I should turn my head.

The hushed silence, the smell of incense and wax, the shafts of light filtering high above through stained glass, the bowed heads: all spoke of the intersection of time and eternity.

That sense of consecrated time and space eventually led me to convert.

That sense of consecrated time and space is what I’ve missed most during lockdown.

We’ve all suited up, showed up, soldiered on. “It’s not that bad,” we’ve told ourselves. “I can do this.” I, for one, have found the livestream Masses a lifeline. Daily from my room I thank the many people who go into putting them on, from the priest on down.

But the fact is a livestream Mass is not a real Mass, not by a long shot.

The fact is we are not made for masks, and shields, and gloves, and a life lived in front of a laptop.

We’re made for the smell of grass, and sharing food with friends, and kneeling on the consecrated ground beneath which a person we love has been buried.

We’re made for breathing the same air, and looking one another in the eye, and the real body and real blood of Our Lord.

And it took walking through a cemetery, among his people, for me to realize how incredibly deeply I have missed him.

Before leaving, I got to use a public restroom for the first time in two months. That, too, was a thrill; a sign of normalcy. We’re together again. The world is getting back to the business of life.

“And after this, our exile, show unto us the blessed fruit of thy womb, Jesus.

Pray for us O Holy Mother of God,

That we may be made worthy of the promises of Christ.”