In trying to make sense of the events surrounding Russia’s invasion of Ukraine, a recent Facebook post from Catholic theologian and writer Scott Hahn with an excerpt from J.R.R. Tolkien’s “The Lord of the Rings” provided me with some necessary inspiration.

“ ‘I wish it need not have happened in my time,’ said Frodo. ‘So do I,’ said Gandalf, ‘and so do all who live to see such times. But that is not for them to decide. All we have to decide is what to do with the time that is given us.’ ”

Thank you, Tolkien. And thank you, Hahn.

As we leave the bucolic land of the Shire, we also leave Tolkien behind, and now you’re stuck with me and the here and now. Over the past couple of weeks, the here and now has become almost as unreal as Middle Earth.

It doesn’t help, and it probably isn’t accurate, to compare Vladimir Putin to Sauron — the world’s geopolitical situation is a bit more complex than Middle Earth’s right now.

But we are in the throes of another major refugee crisis. Every day brings more images of old men and women and children alike trekking by foot for the safety of another country. It is the kind of grim exodus reminiscent more of Poland in 1939 than 21st-century Europe. 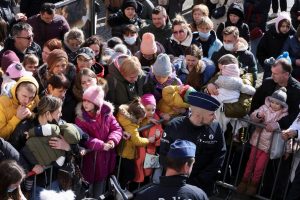 Talk of Russia putting its nuclear forces on high alert, the sense of elevated tensions across Europe and here at home dredge up my own distant memories of the Cuban missile crisis. I was only 5 years old in 1962 — too young to be as worried about it as my parents were, but old enough to have certain memories. The worries were mainly limited to how long we were going to last with a basement filled with dozens of cans of Campbell’s Tomato Soup and my mom’s plum jam.

But even if my parents were not properly prepared for the radioactive fallout, or didn’t properly estimate how long we’d survive before getting weary of tomato soup and plum jam, they more than made up for that deficiency in spiritual preparation.

The rosary was a lot more prevalent in the house in those days. It is probably making a comeback in Catholic households now. I know enough about Our Lady of Fátima and her warnings to be worried about current affairs, but the Scripture-literate know that Jesus has the final word on the final days: “But no one knows the day or the hour. No. Not even the angels in heaven know” (Matthew 24:36).

And even though we should all take seriously what the Blessed Mother has to say about world affairs, I have always thought that praying for the conversion of Russia — a good thing for sure — is a bit of a distraction from our need to pray for our own conversions.

Russia certainly could use a little divine intervention now, but who couldn’t? It’s uncomfortable to point out the plank in the Russian eyes, when we ignore the coastal redwood stuck in our own: tens of millions of abortions each year, a sense of complaceny despite the dwindling numbers of faithful in our churches, and an institutionalized narcissism that makes Sodom and Gomorrah look like a watered-down Disney fairytale from the 1950s.

The fact is, we always live in troubled times, whether you’re a Hobbit or a guy living in Van Nuys. Gandalf’s advice is good advice in the Shire, the San Fernando Valley, and the rest of the world. It all comes down to what we do with the times the Lord sends us.

If the current state of world affairs has us all thinking more about the end of time, which comes to us all whether by nuclear holocaust or getting hit by the Number 321 bus to Santa Monica, the point is for us all to be ready.

What Our Lady warned us all at Fátima is important, but I will leave that up to others to interpret. Instead, I will take Gandalf’s advice and the advice Our Lady gave at that wedding reception in Cana: to do whatever he tells me to.