From the beginning, popes have issued warnings about America’s longest war

ROME – Though it’s hardly the most important dimension of the current crisis in Afghanistan, US-Vatican relations have been affected too, with some wondering if a much-ballyhooed “springtime” in ties between Washington and Rome under Pope Francis and President Joe Biden may be among the casualties of the conflict.

There’s no mistaking the fact that the Vatican is unimpressed with the Biden administration’s handling of the situation. While the pontiff himself has largely held his fire, restricting his public commentary to appeals for prayer, peace and dialogue, his own newspaper, L’Osservatore Romano, has been far more direct.

“It’s stupefying that, prior to deciding to abandon the country, a similar, predictable scenario wasn’t anticipated, and that nothing was done to avoid it,” L’Osservatore fulminated. “And it’s even more grave that such a decision was made despite being aware of its dramatic consequences.”

Italian Vatican-watcher Matteo Matzuzzi has written that despite early hope of a rapprochement under the Catholic, social justice-oriented Biden, the Afghanistan crisis illustrates that “the fault lines between Rome and Washington continue to be ample,” especially on the crucial issue of an “America-first” vision of foreign policy, and that “Pope Francis doesn’t trust the Yankee world,” no matter who’s in charge.

Yet to put all this in context, it’s important to recall that differences on the right approach to Afghanistan between the Vatican and the White House significantly predate either Biden or Francis. In fact, they go all the way back to the beginning of what’s become America’s longest war.

When the Twin Towers attacks took place on Sept. 11, 2001, Pope John Paul II immediately denounced the “unspeakable horror” that had unfolded in New York and assured victims and their families of his prayers. He also dispatched a telegram to then-US President George W. Bush to express “my profound sorrow and my closeness in prayer for the nation at this dark and tragic moment.”

Yet it was unclear from the start whether John Paul was also on board with what seemed at the time the inevitable US military response to the attacks, which everyone knew would begin with the Taliban regime in Afghanistan. 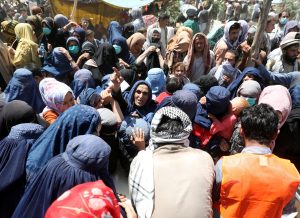 Internally displaced families from northern provinces of Afghanistan, who fled from their homes due to the fighting between Taliban and Afghan security forces, take shelter at a public park in Kabul on Aug. 10. (CNS/Reuters)

During his General Audience the day after the attacks, John Paul renewed his “indignant condemnation” of what the terrorists had done, but he added that he also wished to remind the world that “the ways of violence will never lead to genuine solutions to humanity’s problems.”

Just 11 days after the attacks, John Paul made a previously scheduled trip to Kazakhstan, whose southern border is just a few hours from Afghanistan, despite concerns about security as the region awaited American retaliation. During the trip, the pope’s ambivalence about the looming use of force was evident.

During his Angelus address after a Mass in the Kazakh capital of Astana on Sept. 23, the pope appended a special appeal, in English to make sure the international community heard it: “With all my heart, I beg God to keep the world in peace,” he said. In most media coverage, it was styled as a papal rebuke to the impending US-led military intervention.

That interpretation was strong enough, in fact, that papal spokesman Joaquin Navarro-Valls gave an impromptu interview in Astana that night to journalist Phil Pullella of Reuters in which he compared Bush to a father seeking to defend his family, saying that military action to prevent future terrorist attacks would be morally justifiable. In reaction, most media outlets carried stories about a Vatican “green light” for the impending Afghanistan campaign.

In turn, Navarro’s initiative dismayed Vatican diplomats, who scrambled to disown it. The next morning, Father Federico Lombardi, then director of Vatican Radio and later Navarro’s successor, handed out a lengthy photocopied statement to reporters, the gist of which was that only John Paul’s Angelus address and not Navarro’s interview represented the real thinking of the pope.

In the end it was all something of a muddle, which wasn’t really resolved until two months later when John Paul issued his annual message for the World Day of Peace. In it, the pope acknowledged a right to defend oneself against terrorists but insisted that action should be limited to the terrorists themselves, not entire nations, and that any military or police action must be accompanied by “a courageous and resolute political, diplomatic and economic commitment to relieving situations of oppression and marginalization which facilitate the designs of terrorists.”

Though John Paul never mentioned the US specifically, in context the message seemed clear enough: No to indiscriminate uses of force, and no to a military campaign unmatched by an equally aggressive plan for rebuilding.

Two years later, John Paul and his Vatican team would apply the same criteria to their far clearer opposition to the US-led invasion of Iraq.

Thus, in expressing reservations about US policy in Afghanistan, including Biden’s abrupt decision to walk away, Pope Francis isn’t just channeling his Latin American animus for the great power to the north, nor is he steering the Vatican in a dramatically new direction.

Instead, Francis appears to be voicing more or less the same reservations as his predecessor back at the beginning. It’s an open question how different history might look had the world listened then – and how different the future might look if it chose to do so now.