Regardless of which side of the great American political divide one stands on, the view in 2020 is grim.

Everywhere people are beset by a widespread feeling of impending doom, fueled by a fractured polity, a global plague, and the fierce ideological attacks on family and faith that increase in strength each day.

While our difficulties are real, it is crucial to put them into perspective, both historical and supernatural. Historically, even just in our own young country, things have been much, much worse. And supernaturally, this is no war but more a simple skirmish.

If you have trouble believing this, I recommend something that helped me enormously: Watch the recently released film “Two Crowns.” 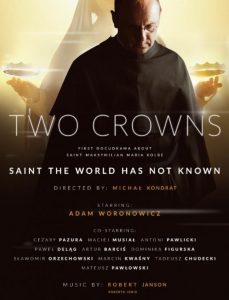 The 92-minute documentary combines interviews and well-acted recreations to depict the life of St. Maximilian Kolbe. Most Catholics today know about the sacrifice that lifted him, bounding, into the luminous ranks of the saints in heaven. Watching, you will see in all its pathos and humanity the famous moment when the Polish priest, already suffering intensely in the Auschwitz concentration camp, volunteers to die in the starvation cell.

He takes the place of another camp inmate who cried out in despair, “My wife! My children!” when being chosen for random extermination.

It’s the kind of heroism capable of inspiring us to do great things, if we let it. But there is another blinding lesson in the life of St. Maximilian.

That slow starvation in the fetid cell that he turned into a chapel of grace — helping his friends die, agonizing one by one with hymns and songs of undying hope in the tender mercy of God — was only the end of his life. Before that he spent decades sowing seeds of faith, building castles of apostolate, growing forests of tall and splendid Christian men and women. He was doing all of this in his native Poland, with the exception of a brief stint in Japan.

In those years leading up to the German invasion, the young priest did tremendous things. He founded a Catholic evangelization movement called the “Militia Immaculatae” (“Army of the Immaculate One”), centered around the total consecration of each human heart to the Virgin Mary.

He built an apostolic center near Warsaw called the “City of the Immaculata,” where he was joined by more than 650 friars in just 12 years. Living in poverty, St. Maximilian and his friars created a magazine that reached a monthly circulation of 1 million and a daily newspaper that reached more than 230,000.

The idea was to use print and radio in cities across the country to reach souls and draw them to Christ through Mary.

Then in 1939 Poland went dark, swallowed by the German invasion. St. Maximilian continued his work bravely, knowing the risk he was running. He and the other friars not only hid more than 2,000 Jews, but continued their publishing ministry, announcing hope in the face of the tragedy. He was eventually arrested and sent to the Auschwitz death camp.

It is clear that the man who sang hymns, comforted his fellow prisoners, and exhibited only calm acceptance in the face of the greatest torture was firmly grounded in the most perfect hope. And yet, where was his hope but in the purposes of God? 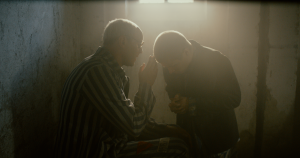 Every single material accomplishment of his life was being ground to dust under the pitiless German boot. Whatever was left would, after his death, be blown away by the awful winds of decades-long Soviet oppression. Or would it?

Here is the lesson for us.

The faith of the Polish people, growing from seeds planted by St. Maximilian, still bears the fruits of this persecution today, even after a lifetime or two of dehumanization and de-Christianization. Policies for the protection of the unborn, of the family, of marriage, and of faith are thriving in Poland.

Long after the saint’s death, it is the Catholic faith that he helped preserve and watered with his martyr’s blood that keeps the Polish people strong against the ideologies that seek to conquer them as the Nazis and the Soviets once did.

In our own moment of darkness we can think of St. Maximilian and take heart. There is no act of faith, or apostolate, or charity, that does not bear fruit. There is no hope that is not fulfilled in good time. There is no fear that in the end is not perfectly relieved for the one who wants what God wants, and in just the way that God wants it, no matter how great our terror.

If St. Maximilian could go to his death in perfect, faithful confidence, in the darkest historical moment and the most cruel place on earth, then we can proceed cheerfully. Whatever good we can do today will find its way to where it is needed, and all our hopes will be gratified.

Screenings of “Two Crowns” have been suspended due to the coronavirus (COVID-19). To stay up-to-date with the latest developments concerning ways to watch the film, visit TwoCrownsMovie.com.