Every story needs a villain

As I play out the microcosmic version of the ages of man in my own household, I find myself in the company of a 2 1/2-year-old boy. He is my grandson, and he lives with us. I love him; he reminds me of my purpose in this life and he is providing me fodder for this article. So it is a win-win-win for me.

It has been a while since I watched television aimed at people who are just beginning to express themselves linguistically instead of grunts and pointing. Some people suggest I communicate this way at times, which is only further evidence of the cyclical nature of things. In my newfound exposure to children’s television, I have discovered most of these offerings are infinitely forgettable, some are clever, and almost all have a certain “woke” and “enlightened” view of the world — places where everyone is basically nice, even those who may act like bad guys at first. If a character does commit some anti-social activity, it is remedied with smiles and happy thoughts.

The Disney Channel, rather popular in our house right now, encapsulates this trend to the extreme in the premise of every show I have seen, and trust me, I have seen a lot.

There are no real villains in the plotlines. If you do not think I know from where I speak, ask me how to do the Hot Dog Dance from the “Mickey Mouse Clubhouse.” The show contains the depository of iconic Disney characters: Mickey Mouse, Minnie Mouse, Donald and Daisy Duck, Goofy, and Pluto … and then there’s Pete.

People of a different age, usually the type that are now old enough to be watching this stuff with their grandbabies, remember a vastly different Pete. In cartoons past, Pete was a bad dude. He usually seemed intent on killing Mickey, kidnapping Minnie, or some combination of both.

The Pete we meet in the “Mickey Mouse Clubhouse” may be a rascal, but he is as toothless as a stuffed Tigger. 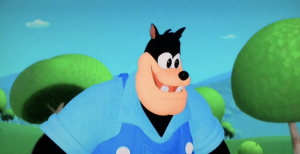 My grandson is also an aficionado of a show about dogs dressed as first responders. In an aquatic version of this show there actually was a sea monster attacking a boat. The dogs came to the rescue, but not before we learned the sea monster was only a concerned mom looking for her lost little monster — and fear not, it all ended happily with smiles and happy thoughts.

The problem with this view of the world is that it is false. In the real world, there really are big bad wolves and trolls, and there are monsters of every sort.

The trend of cutting off the hard edges of traditional fairy tales goes back a long way. When Walt Disney was running the Walt Disney Studios, he caught a lot of flak from purists for sanitizing some of the classic fairy tales he re-imagined. Yet even in their “Disney-fied” state, the villains were scary, and a hero was required to do the right thing.

I am confident that if the current masterminds who control the Disney entertainment behemoth rebooted “Old Yeller,” there would be no hydrophobia and violent euthanizing of a diseased animal. The climax would probably have the ever-faithful Old Yeller running to get help because his young master has fallen into an empty well made that way by climate change.

Lots of people say things better than I do, and G.K. Chesterton’s commas are even better than mine. And he summed up the importance of scary things in fairy tales thusly: “The baby has known the dragon intimately ever since he had an imagination. What the fairy tale provides him is a St. George to kill the dragon.”

Using my magic grandpa powers, I will, when the time is right and my grandson is ready, introduce him to stories where dragons and monsters reside, and heroes to do battle with them. I will do so not to make him afraid but, God willing, make him aware that those stories are hints to the broken world we all inherit from our first parents.

It will be a burden and an honor to steer him toward the truly heroic. The stories may not always be remedied with smiles and happy thoughts, but if it bends him toward the heroic, toward the ultimate dragon slayer who is King of Kings, then I will have a very happy ending to the story.