ROME — One of the most persistent myths about Catholicism is that it’s a top-down, highly centralized operation, with everything decided by the pope in Rome. In reality, it’s one of the most thoroughly decentralized institutions on the face of the earth and always has been.

This isn’t Walmart, where the internal temperature in all 11,500 stores belonging to the chain is controlled by a centralized computer at the company headquarters in Bentonville, Arkansas. In Catholicism, the pope not only doesn’t set the temperature, he doesn’t even own the churches.

Indeed, for the last two years, we’ve been witness to a global graduate seminar in the decentralized nature of Catholicism vis-à-vis the coronavirus pandemic. Far from projecting a unified, coherent front to the pastoral and political questions raised by the pandemic, the Church’s response has been ad hoc, disorganized, and widely different from place to place.

In the U.S., some bishops sued to challenge limits on public worship imposed early in the crisis by the state; in Europe, they stayed on the sidelines, likely more influenced by Pope Francis’ admonition to obey public authorities.

Some bishops around the world were quick to withdraw temporary dispensations from the obligation to attend Sunday Mass, even in advance of a material change in the local situation, while other bishops still have those dispensations in place even after things have improved.

Today, new contrasts are emerging in the Church’s reaction to the vaccine mandates, which are quickly sweeping around the world, including the Vatican’s own host nation of Italy, where the possession of a “green pass” is now basically obligatory to go out of the house. Among other things, all workers, public and private, are now required to hold a green pass or their salaries can be suspended until they get one.

From the beginning, Catholic resistance to the vaccines has been based not only on generalized concerns about their safety or effectiveness, but also more specific objections to the use of genetic material remotely derived from aborted fetuses in either the production or the testing of the drugs.

Although both the Vatican and various bishops’ conferences have held that the degree of cooperation in abortion involved is so low, and the public health benefit so high, that use of the vaccines is morally acceptable, a small number of Catholics in various parts of the world continue to hold out. 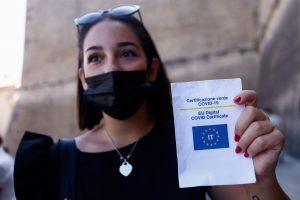 That ambivalence perhaps helps explain the varying ways in which Church leaders are responding to the vaccine mandates.

Recently, the Archdiocese of Moncton in Canada, led by Archbishop Valéry Vienneau, announced that all people over the age of 12 attending a gathering in a Catholic church, rectory, or community center would have to have to be vaccinated. After several days of uproar, however, Archbishop Vienneau dropped the requirement after consulting with neighboring bishops and local health authorities.

The Archdiocese of Chicago under Cardinal Blase Cupich, meanwhile, is now requiring all its employees to be vaccinated, as are several pontifical universities in Rome and a number of other Catholic institutions.

In other places, however, Catholic leaders are pushing back against vaccine mandates. In the Australian state of Victoria, for example, a reopening plan envisions that only fully vaccinated people will be permitted to attend public worship services once 70% of the population has had both doses. That requirement has drawn opposition from Melbourne Archbishop Peter Comensoli.

“Religion is not the same as going to a sporting event or the theater,” Archbishop Comensoli said. “Different events have different status, and the practice of one’s religion is a human right.”

The Vatican recently imposed its own green-pass mandate, establishing that as of Oct. 1, anyone entering the small city-state will be required to display a vaccine certificate, including “all personnel of whatever title.” The lone exception will be for people attending liturgical celebrations, which presumably include papal audiences and the Sunday Angelus address, “but only for as long as is strictly necessary to celebrate the rite.”

That’s consistent with the tone Pope Francis has set from the beginning, which is broad support for the public health measures enacted by civil authorities in an effort to combat the coronavirus pandemic.

So, do we have a new front in the Church’s culture wars vis-à-vis vaccines?

Probably the better way to look at it is that the vaccine mandate is the most pressing current instance of two deeper tensions in contemporary Catholicism:

Those tensions obviously pre-date the coronavirus, and they’ll undoubtedly still be here long after the pandemic is in the rearview mirror. They do, however, help explain a great deal about the variations in Catholic reaction.

Take those basic fault lines, throw in the structurally decentralized nature of the Catholic Church, and what you get is pretty much what we’ve got right now: highly different approaches to the pandemic and its resolution, with low odds those differences will be harmonized anytime soon.