Zapotecs have lived in the Oaxaca Central Valley for more than 2,500 years. Today, they comprise the third largest indigenous group in Mexico, while 80,000 Zapotecs reside in the Los Angeles area.

Gutiérrez learned to weave at the age of 12 and comes from a long line of master craftspeople who are bent on passing on their traditions to a new generation.

He divides his time between Oaxaca and Ventura, where he also has a studio and gallery.

Gutiérrez’s work figures prominently in the exhibit “Wrapped in Color: Legacies of the Mexican Sarape” at the Arizona State Museum, University of Arizona, Tucson. The online photos provide a taste of his brilliant and richly colored pieces.

On view are historic textiles from Mexico, New Mexico, and indigenous communities, as well as contemporary textiles, including six woven by Gutiérrez specifically for this exhibit.

The Zapotec culture was considered one the most advanced in Mesoamerica when the Spanish arrived in the 1500s: highly developed in mathematics, spirituality, agriculture, and the arts.

The Spanish brought their own culture, worldview, and religion, and over time the two civilizations began to blend. The Zapotec weavers traditionally used backstrap looms and agave fibers, for example. The Spanish introduced upright looms and sheep wool for fiber.

Sarapes could be used as a shawl, thrown over one shoulder, or as a poncho. In Spanish Colonial times they were of fine quality and expensive, mostly worn by ranch owners who traveled by horseback.

Over time, sarape weaving came to be centered in the town of Saltillo, a trade hub in northeastern Mexico. By the early 1800s, Saltillo sarapes were widely known for their durability, design, and excellent workmanship.

With the explosion of tourism in the early 1900s, Mexican weavers began using synthetic dyes, acrylic yarn, and electricity-powered looms. The quality and fineness of the work declined.

To that end, he maintains his ancestor’s belief that nature is a living being, sacred and divine. His raw materials, derived from the natural world, mean that his work revolves around nature’s cycles and seasons.

The making of a sarape is a painstaking, labor-intensive process. 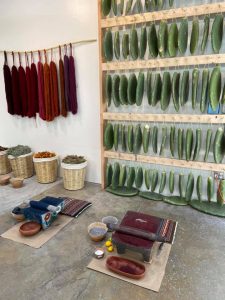 First comes the processing of the raw wool, which must be washed and thoroughly cleaned, usually in a nearby river using an indigenous soap plant called amole. Burrs, small stones, and plant matter are plucked out by hand. Guterriez’s mother often presides over this part of the process. The water, she notes, is alive with tremendous force, making the cleaning of the wool an essential and important ceremony.

The wool is then combed, carded, and spun on manually powered spinning wheels. The resulting yarn is boiled in potassium alum, a naturally occurring mineral that acts as a fixative. Then the yarn is ready to dye.

He is passionate about the process, and periodically offers four-day natural dye workshops at his Ventura studio.

He is something of an expert on cochineal dyes, which produce a range of reds, magentas, purples, burgundies, oranges, and pinks.

Cochineal is derived from parasitic insects that infest the paddles of the nopal cactus (also known as opuntia or prickly pear). You’ve seen those fuzzy white patches, known colloquially to many in Southern California as “white fly” and considered a noxious garden pest. Attempts to brush it off result in a dark purple smear.

When harvested and dried, those white spots resemble gray, BB-sized pellets that are ground on a metate and hand-processed with techniques that can take decades fully to learn. It takes upward of 700 prickly pear pads to produce a single kilo of cochineal.

After the dyeing is complete, the yarn is woven into sophisticated and complex designs on pedal looms. Gutiérrez takes ancient symbols and forms — the central diamond and the circular medallion, for example — runs them through a lens that includes his experience and view of contemporary urban life, and arrives at something all his own.

You can buy Gutiérrez’s products online, many for under $1,000: small rugs, table runners, bags. Or you may feel these are really works of art that cry out to be hung on a wall to be fully appreciated. Either way, these are textiles that want to be touched, smelled, embraced as part of the beauty and ritual of daily life.

Or as one commentator puts it: “His artwork inhabits the convergence of both worlds, where his soul dwells.”