Both in the US and the Church, fall 2022 to provide hints of future directions

ROME — Six months from now, midterm elections in the United States will offer the first real electoral test of which direction the country seems to be moving. Traditionally, a president’s party loses seats in his first midterm. Over the last 100 years the average is 30, and President Joe Biden’s low approval ratings seem to buttress the prospects of Republican gains.

On the other hand, ex-President Donald Trump’s favorability numbers are just as low as Biden’s, and it’s not clear Americans are ready to reward a party still dominated by Trump. In generic ballot polls, which ask people whether they’re likely to vote Democratic or Republican in the midterms, the race seems neck-and-neck.

As it happens, several events this fall also seem likely to offer hints as to the future direction of the Catholic Church, though none of them are quite as explicit as the actual voting that will take place in the U.S.

For one thing, the extraordinary process for the 2023 Synod of Bishops, the synod on synodality, will reach its midway point. The new deadline for episcopal conferences and the Eastern churches to submit their synthesis of the input they received during the diocesan listening phase of the process is Aug. 15.

(Footnote: I don’t know whose sense of humor is being indulged by that deadline, but in Italy, Aug. 15 is the festival of “ferragosto,” when absolutely everyone in the country is off work and either in the mountains or at the beach. They might as well have set a deadline of Sept. 15, because nobody’s going to be in the office to deal with whatever comes in much before then.)

Those syntheses, assuming they’re released to the public — and, let’s face it, the Vatican might as well formally publish them, because they’ll inevitably leak anyway — will provide some sense of how bodies of bishops are reacting to the exercise, and which issues they believe ought to be at the top of the Church’s to-do list.

Oct. 11 of this year also will mark the 60th anniversary of the opening of the Second Vatican Council, that massive gathering of bishops from all over the world that shaped the modern Church, and whose legacy still defines the main fault lines in Catholic debate.

It’s not clear precisely how the Vatican plans to mark the occasion. It’s a safe bet, however, that Catholic universities around the world, Catholic media outlets, Catholic organizations and movements, and other players on the ecclesiastical stage will be holding symposia, publishing papers, organizing conferences, and issuing news releases, all of which will provide another way to take the temperature of the Church at a critical moment. 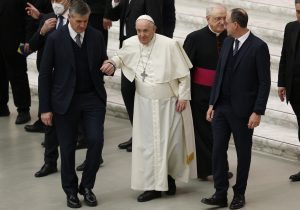 Plagued with knee pain, Pope Francis holds the arm of his aide, Sandro Mariotti, as he walks during his general audience in the Paul VI Hall at the Vatican in this Jan. 26 file photo. (CNS photo/Paul Haring)

As it happens, Oct. 11 also marks another important anniversary in Catholic life. It was on that date in 1992 that St. Pope John Paul II promulgated the new Catechism of the Catholic Church, a compendium of Catholic doctrine prepared by a commission led by then-Cardinal Joseph Ratzinger. The commission’s secretary was a young auxiliary bishop in Vienna, Austria, and a distinguished Dominican theologian by the name of Christoph Schönborn, who has gone on to become a cardinal and an ally of Pope Francis.

At the time, liberal Catholics objected to the catechism, not only for its content but the very idea that the Church ought to have one single official collection of its doctrine. In the past, such critics noted, catechisms were published regionally, such as the famous Baltimore Catechism in the United States, thus reflecting the diversity of the universal Church.

As a result, how much local churches choose to celebrate the anniversary of Pope John Paul’s catechism, as opposed to the degree to which they ignore it, will also offer another bellwether of where opinion in the Church now stands.

Finally, there’s the unspoken reality that various players in the Church are already thinking about the next conclave, meaning the next papal election.

Some of that is related to health, given that Pope Francis is 85, he’s got one lung, he suffers from a bad case of sciatica and now he’s got a bum knee that limits his mobility. On the other hand, none of that appears to be stopping him from scheduling a travel itinerary this summer that would put the Grateful Dead to shame, with stops in Lebanon, possibly Jerusalem, the Democratic Republic of Congo, South Sudan, and Canada.

Much of the speculation, however, is driven simply by the fact that some share of the Church never warmed to this pontificate and is anxious for a transition. I recently asked a friend from Eastern Europe how many of the bishops from his country would vote to reelect Pope Francis in a secret ballot, and he came up with two — both appointed directly by this pope. The rest, he said, are confused and alarmed by what they’re seeing from Rome, and they’re counting the days until the winds shift.

However premature, such talk about the next pope is certain to continue, and it may well build toward the various anniversaries and milestones to be marked later in the year.

Given all the above, this fall should provide us with a good test of where things stand both in the U.S. and the Church, even if, on the Catholic side, we won’t quite get the zero-sum clarity of actual elections.