The true inheritance of the ‘Benedict XVI Generation’

I was walking across the grotto in front of my college chapel when bells began to toll, one after another. It was April 2005, the end of my junior year. I stopped and looked at the assistant chaplain who was outside, speaking to some students. “We have a new pope,” he hollered, a big grin spreading across his face.

A few minutes later, those of us gathered together learned that the conclave had elected Cardinal Joseph Ratzinger to succeed Pope John Paul II. I didn’t know what to make of something so novel. In the 21 years I’d been alive, there had only been one pope. What would Catholicism look like with someone else at the helm?

“This is a very good thing,” the chaplain, a Dominican friar, assured us. Though born Michael, his religious name was John Paul. I erred on the side of trusting him. 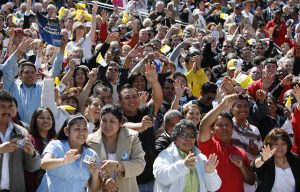 It’s a bit of a cliché to characterize one’s adolescence as uniquely tumultuous, but I tend to believe that as a whole, my generation was given one of the more disruptive rides into adulthood.

My freshman year of high school drew to a close with the Columbine massacre. No one had ever seen such a thing. Bomb threats and shelter-in-place drills soon became the norm.

Then the bottom really fell out from under us. My senior year of high school began with 9/11; it concluded with the Boston Globe’s Spotlight investigation. Schools, office spaces, sacristies — ordinary spaces became the loci of unspeakable trauma.

And then as our friends and relatives started losing lives and limbs in Iraq and Afghanistan, we learned that the weapons of mass destruction and the terrorists at the helm of the attacks were nowhere to be found. We began to question who we could trust.

Perhaps the most devastating betrayal took place in our families. I was among the generation whose Baby Boomer parents divorced in droves, the inevitable consequence of their collective self-actualization project. Without assurance that the adults in the room were going to protect us, we entered adulthood unmoored.

It was in this context that the newly elected Pope Benedict XVI preached his inaugural homily. To those of us who were searching, still hoping to find secure footing, the pope’s words pierced our hearts.

First, he acknowledged our weariness, as if he were touching the wounds in our sides like Thomas touched Christ’s:  “[For the pastor] it is not a matter of indifference that so many people are living in the desert. And there are so many kinds of desert. There is the desert of poverty, the desert of hunger and thirst, the desert of abandonment, of loneliness, of destroyed love. … The external deserts in the world are growing, because the internal deserts have become so vast.”

Next, he spoke to our uncertainty about our place in a world in which nihilism seemed plausible, suicidal ideation was rising, and the atheism of evolutionary biologists was attracting scores of disciples. To this he counseled, “Only when we meet the living God in Christ do we know what life is. We are not some casual and meaningless product of evolution. Each of us is the result of a thought of God. Each of us is willed, each of us is loved, each of us is necessary.”

Finally, he gave us direction. “And so, today, with great strength and great conviction, on the basis of long personal experience of life, I say to you, dear young people: Do not be afraid of Christ! He takes nothing away, and he gives you everything. When we give ourselves to him, we receive a hundredfold in return.”

I do not exaggerate when I say that this homily changed my life. Though I was excelling in college academics and integrated into the extracurricular life on campus, I was struggling with self-worth to the point of contemplating making a permanent exit. The pope’s words prompted me to make regular visits to the college chapel on my way home from the library. There in the darkness, gazing on the dimly lit crucifix, I began to have my first real dialogues with Jesus. Before that point, I only recall two decades of monologues. Now, I was listening. 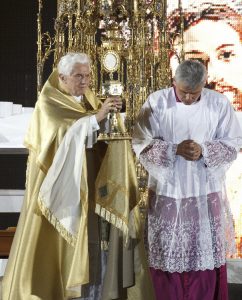 Pope Benedict XVI leads Benediction of the Eucharist during the World Youth Day prayer vigil at Cuatro Vientos airfield in Madrid Aug. 20, 2011. Hundreds of thousands of young people, set to camp out for the night in the open field, endured driving rain and wind at the start of the service. The pope continued with the evening's rituals after the storm cleared. (CNS photo/Paul Haring)

Just as we await Church historians’ assessment of whether or not there has been a “Francis Effect” on the life of the Church — measured by growth, sacramental participation, and vocational commitments — it’s hard to say if they will identify a “Benedict Effect.” Eight years is not a long time to shape a generation or two. His predecessor had 26.

My hunch is that we’re out there. Let me be clear: To call myself a “Benedict XVI” Catholic does not negate my filial love of Pope Francis, or make me a hard-liner (an unfortunate mischaracterization of the man and his message). In fact, my life is informed by many people of goodwill who do not practice Catholicism.

Instead, it is to say that I came of age with him as my shepherd, and his writing and preaching helped me to meet the living Christ. Like many of my peers, he convinced me to shape my life around that friendship. His soft-spoken encouragement compelled many of my friends and me to get married and welcome children, enter religious orders, and become priests. He taught us to care for the poor and the planet, and prior to doing both, to pray.

On the cusp of adulthood, my peers and I were looking for something or someone to cling to when the world was spinning out of control. A small number of us were still listening to the Church, even if we were skeptical of her. It was to that remnant that Pope Benedict spoke about Jesus Christ. It was, to be sure, a very good thing.