An invitation to rest at Pasadena's Japanese garden

Located at 270 Arlington Dr. in Pasadena and comprising two acres, the Storrier Stearns Japanese Garden is a hidden LA treasure.

The pond-style stroll garden was created in the 1930s by Japanese immigrant Kinzuchi Fujii for his patrons Charles and Ellamae Storrier Stearns.

After their deaths, most of the property was sold off, Caltrans seized part of it by eminent domain in the 1970s, and by 1985, when Jim Haddad and his wife, Connie, inherited it, the remainder was in severe decline.

Their concerted efforts, along with the heroic contribution of Takeo Uesigi, one of the country’s leading experts on Japanese garden design, led to the garden’s restoration.

In 2005, the Storrier Stearns was listed on the National Register of Historic Places. It claims the distinction of being the only intact example of a major Japanese-style garden created before World War II for a residence in Southern California.

This is not the place if you’re looking for vivid and splashy. The garden, like most things Japanese, is subtle: a single pink azalea bloom against a background of moss tones; the flash of an orange koi fish gliding through the soft green-gray pond water. Patience, quiet observation, and attention to detail yield results.

In fact, before going, you might want to read “In Praise of Shadows,” the 1933 classic essay on Japanese aesthetics by Japanese author and novelist Jun’ichiro¯ Tanizaki:

“[W]e Orientals tend to seek our satisfactions in whatever surroundings we happen to find ourselves … and so darkness causes us no discontent, we resign ourselves to it as inevitable. … But the progressive Westerner is determined always to better his lot. From candle to oil lamp, oil lamp to gaslight, gaslight to electric light — his quest for a brighter light never ceases, he spares no pains to eradicate even the minutest shadow.” 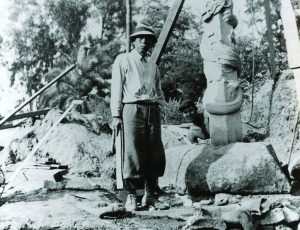 You’ll find a small display of lacquered parasols, as well as Japanese snacks, stickers, and postcards on the front patio. Inside, the gallery is currently running the exhibit “Nature in the Art of Japan.”

This, too, is a respite from the bigger, louder museums we may be used to: LACMA, MOCA, The Broad. Here, the eye is invited to calm down and spend a little time with 12 to 15 pieces (many of which are for sale): a fan of ivory silk embroidered with a purple iris; a print entitled “Moon of the Southern Sea” by celebrated artist of the Meiji period (1868-1912) Tsukioka Yoshitoshi.

All of which was a beautiful entree to the garden itself. Make sure to read the brochure, as it describes many features that, clunking around trying to take it all in one big, greedy Westernized gulp, you might miss.

The Hiroshima Camellia, for example, is descended from one of the 170 trees that survived the U.S. bombing in 1945. The Zig Zag Bridge, the purpose of which is to slow the gait of the walker, was constructed of granite imported from Japan in the late 1930s.

The Waiting Bench is a traditional Japanese attribute that invites guests to rest for a bit and enjoy the surroundings before being welcomed into the teahouse for a ceremonial serving of tea.

If you’re not up for removing your shoes, you can easily peek into the Niko-An (Abode at Two Ponds) Teahouse from the surrounding stone steps: plain tatami mats, soothing shades of celadon green, wheat, iron gray. 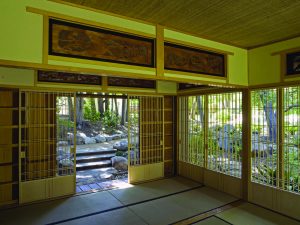 An interior view of the authentic Niko-An (Abode at Two Ponds) Teahouse, the highlight of the garden. © Storrier Stearns Japanese Garden

“We [Japanese] find it hard to be really at home with things that shine and glitter. The Westerner uses silver and steel and nickel hardware, and polishes it to a high brilliance, but we object to the practice. While we do sometimes indeed use silver for teakettles, decanters or sake cups, we prefer not to polish it. On the contrary we begin to enjoy it only when the lustre has worn off, when it has begun to take on a dark, smoky patina.”

You’ll find restrooms tucked into the back part of the garden, as well as a small gift shop with an enticing window display of kimono, shawls, chopsticks, glazed trays, notepaper, and teas. “Opened on Request” reads the sign, which turns out to mean Sundays. So visit then if you want to peruse this delightful, one-of-a-kind collection.

You can also picnic, set up your easel, or plan your meeting and retreat here for up to 32 people. Members have access to every-other-month breakfasts and four-person-max workshops that include Onigiri (Rice Ball) Making, Compost 101, and Hinamatsuri or Girls Festival, in which Jeanne Heilman, the garden’s “creative docent,” will teach how to make beautiful dolls “to celebrate our daughters’ happiness, good health, and growth.”

But back to the garden itself, which is a lovely spot to spend a couple of secluded, quiet hours. The very feel and sense of the place invites contemplation.

The Storrier Stearns was landscape architect Fujii’s single great commission. He worked on the garden through 1942, when he was sent to a Japanese internment camp. That’s a shadow not easily dispelled by the brightest of lights.

In the shade of the sycamores say a prayer for him, and all like him, before you leave.

Humanity, ethics must be at center of AI technology, pope says