ROME — When Pope Francis makes a day trip to L’Aquila in central Italy on Aug. 28, media attention doubtless will focus on his stop at the tomb of Pope Celestine V, scouring his words and gestures for any hints that the pope may follow the example of his 13th-century predecessor by resigning the papacy.

One understands the roots of such speculation.

We’re talking about an 85-year-old pope missing part of one lung, who suffers chronic sciatica, who underwent colon surgery last summer, and who’s now largely confined to a wheelchair due to osteoarthritis in the knees. Moreover, he has lived through two historic resignations — that of Pope Emeritus Benedict XVI from the papacy, and that of the late Father Peter Hans Kolvenbach as superior of the Jesuits — so it’s not as if the idea is foreign.

The fact that Pope Francis has sandwiched the outing to L’Aquila, located about 90 miles north of Rome, between a consistory for the creation of 21 new cardinals and two days of meetings with all the cardinals of the world has given rise to a bout of theorizing that he may be setting the stage for a historic resignation announcement. (One Italian news outlet recently termed that theorizing a “crazy drumbeat.”)

Yet we’re also talking about a pope who already has another trip on the calendar for a month after L’Aquila, to the southern Italian city of Matera, and he has a Synod of Bishops looming next year in which he’s invested tremendous resources. Pope Francis also just launched a wide-ranging reform of the Roman Curia, which he undoubtedly wants to see through.

In other words, the speculation about resignation is just that — speculation. In the meantime, the danger is that the speculation may distract from two core elements of the brief, five-hour trip to L’Aquila, which neatly encapsulate two cornerstones of this papacy: mercy, and outreach to suffering and forgotten people.

To begin with, Pope Francis didn’t choose Aug. 28 for the trip because it falls between his cardinal gatherings, but because it’s the date of the annual “Perdonanza Celestiniana” (“Celestinian Pardon”), a jubilee instituted by Pope Celestine V in 1294, and just about the only aspect of his five-month reign other than his resignation, which has endured.

The jubilee celebration offers a plenary indulgence, meaning the full remission of sins, to anyone who receives Communion, makes a confession, and enters the Basilica of Santa Maria di Collemaggio in L’Aquila between vespers on the evening of Aug. 28 and Aug. 29.

It is, in other words, a festival of mercy. Pope Francis will be the first pope in 728 years to personally open the Holy Door for the jubilee, and for a pope whose very motto is mercy — “miserando atque eligendo” (“choosing with mercy”) — that prospect looms as a very special moment indeed.

Cardinal Giuseppe Petrocchi of L’Aquila, who will host the pope, has defined the city as a “world capital of forgiveness,” suggesting this is the real reason for the pope’s visit.

As for suffering, it’s important to recall why Pope Benedict XVI went to L’Aquila on April 28, 2009 — and, hint, it wasn’t to foreshadow his own resignation a full four years later. It was because a magnitude 6.3 earthquake had struck the city on April 6, eventually claiming the lives of 309 people, making it the deadliest quake to hit Italy since a magnitude 6.9 earthquake struck the southern region of Basilicata in 1980. 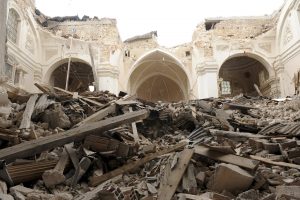 Rubble covers the interior of the medieval Santa Maria of Collemaggio Basilica in L'Aquila, Italy, April 13. The bones of 13th-century Pope Celestine V were retrieved undamaged from the basilica after a devastating earthquake struck the city. (CNS photo/Daniele La Monace, Reuters)

Italy is infamous for its chronic incapacity to provide adequate support for reconstruction efforts after natural disasters. Indeed, an Italian priest named Father Dante Paoloni wrote an updated version of the “Divine Comedy” in 1983 placing earthquake victims in the third circle of hell, consigned to live forever in decrepit “transitional” housing.

So it has been in L’Aquila, where scores of people still haven’t been able to return to their homes or places of business after 13 years. Rebuilding efforts have suffered further delays due to the COVID pandemic and, more recently, the war in Ukraine, which has caused fuel prices to skyrocket.

Locals in L’Aquila, who were able to hold a candlelight procession in memory of the victims of the 2009 earthquake this past April for the first time since the 10-year anniversary in 2019, are hoping that the pope’s visit will spotlight the unfinished business of reconstruction and the suffering of victims.

That painful legacy, by the way, is still very much alive.

Last month, a civil court ordered the Italian government to pay more than $340,000 in compensation to the family of a 44-year-old Macedonian bricklayer named Refik Hasani who lived in L’Aquila, and who returned to his home immediately after the main quake because a government official said on TV it was safe. Hasani later died when his building collapsed following an aftershock.

Pope Francis’ visit thus affords him the opportunity to remind the victims and their families that the Church, and the papacy, have been with them from the beginning, and remains with them today. The pope takes his roles as the bishop of Rome and the primate of Italy seriously, and this is an important chance to act on them.

These twin emphases on mercy and compassion for those who suffer are very much at the heart of Pope Francis’ papacy. Here’s hoping it doesn’t get lost in the shuffle in L’Aquila, amid a frenzy of guesswork about the papacy’s tomorrow.