Advice for raising the next generation

It’s hard to imagine that anyone who ever raised children found it an entirely easy job. Challenging, exciting, often rewarding — yes. But easy? You’ve got to be kidding.

That is certainly the case when it comes to religion. Yet as Christian Smith and Amy Adamczyk report in their important new book, “Handing Down the Faith” (Oxford University Press, $29.95), “above and beyond any other effect on children’s religion is the influence of their parents.”

By no means does that mean that what parents do will be an absolute guarantee of either success or failure. The children of religiously conscientious parents sometimes turn out to be unbelieving rascals, while religiously careless parents now and then raise offspring who become saints.

But making ample allowance for the many exceptions, it appears to be generally true that parents who are lax in their faith turn out kids who then prove even laxer. As Stephen Bullivant says in his illuminating analysis of Catholic “disaffiliation” in “Mass Exodus” (Oxford University Press, $29), there is a clear link between the seepage from the Church occurring in recent decades and the fact that the “Catholic” upbringing of many of those who took leave of the faith was “very weak or nominal.”

Data provided by sociologists Smith and Adamczyk (he teaches at Notre Dame, she at the John Jay College of Criminal Justice and the City University of New York) shed further light on what that means. 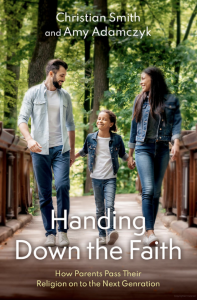 In one major study, for instance, only a dismaying 17% of Catholic parents and mainline Protestants said it was “very important or essential” that their children have strong religious faith. The rest presumably communicated laissez-faire indifference about religion to their kids — with painful but eminently predictable results.

Other figures shed further light on the parental influence on children’s religious decisions. Among the Catholics, 63% agreed either “strongly” or “somewhat” that the choice of a religion — or of no religion, if that is the case — should be left up entirely to the children, with only 37% holding that parents ought to encourage offspring to accept their own faith.

So why do young people raised in nominally Catholic homes end up leaving the Church? There are plenty of factors at work here, so that what parents do or fail to do is not the total explanation. But as figures like these suggest, the parental role in producing a negative outcome can hardly be ignored.

What, then, can Catholic parents eager to pass on the faith to their children do to make that happen? I repeat: In the nature of things, there is and there can be no 100% foolproof formula for success. And that’s especially true today, when popular culture throws so many roadblocks in the way of responsible parenting. In general terms, however, two modest suggestions by Smith and Adamczyk near the end of their book make good sense.

The first is that, besides practicing the faith themselves, parents talk to their children about it. “If there were only one practical take-away from our research,” the authors write, “it would be this: parents need not only to ‘walk the walk’ but also regularly to talk with their children about their walk, what it means, why it matters, why they care.”

The second suggestion is that parents practice a “general authoritative” parenting style. “Combining clear and implemented life standards and expectations for their children with expressive emotional warmth and relational bonding with their children fosters relationships that most enhance effective religious transmission,” Smith and Adamczyk say.