A taste of California Gothic at Forest Lawn Museum

Everyone knows that Forest Lawn is a giant cemetery off the 134 in Glendale.

But do we all know of the Forest Lawn Museum?

James Fishburne, Ph.D., Forest Lawn Museum director and exhibition curator, says, “We’re a hidden gem and I want to make us a visible, widely known gem. Forest Lawn is a whole institution. Art is part of our DNA.”

“There’s the outdoor statuary, of course. And the buildings themselves are works of art: stained glass, mosaics, paintings.”

The Hall of Crucifixion-Resurrection, for example, houses the largest religious painting in the Western Hemisphere: Jan Styka’s “The Crucifixion” from the 1890s. Robert Clark’s “The Resurrection” (1965), also massive, literally slides on a track.

“The building itself is really incredible, a loose recreation on the outside of the cathedral in Orvieto, Italy, a kind of Gothic Renaissance. Then you step inside and it’s French Gothic, and you step in farther and the style becomes reminiscent of a mid-century movie palace. It’s a neat mashup, sort of an ‘only in LA’ type of thing.”

The museum, free and open to the public, launched in 1952. A permanent gallery houses more traditional, 19th- to 20th-century European and American painting and sculpture.

Two other full galleries are devoted to rotating exhibitions. Often, but not always, LA-based, these have ranged from “GOOOOL! The World Cup’s Greatest Moments” to “The Elevated Eye: Aerial Photography Past and Present” to the current exhibit, “Judson Studios: Stained Glass from Gothic to Street Style.”

Judson Studios, “Designers and Craftsmen Since 1897,” is a world-renowned LA institution and the oldest family-run stained-glass studio in America. The W.H. Judson Art Glass Company, founded by William Lees Judson, was headquartered in downtown LA until 1920, when it relocated to Highland Park’s Garvanza District. Fifth-generation David Judson now serves as director.

Even apart from the exhibition, Forest Lawn’s is among the largest stained-glass collections in the United States, with pieces dating from the Middle Ages all the way up to the present spread throughout the park.

Thus the pairing with Judson Studios is inspired. “It’s wonderful to see a 600-year-old window next to a 90-year-old window from Judson,” says Fishburne. “The front gallery features the more historical items, and you can see how Judson carries on this medieval tradition so well.” 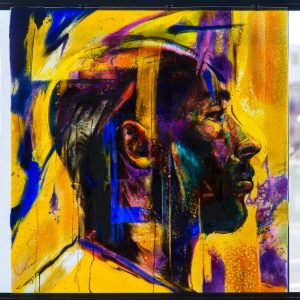 Colored glass is an ancient craft; both the Egyptians and the Romans made small objects such as beads. Stained glass became a Christian art form around the fourth century with the advent of church-building.

But don’t make the mistake of associating stained glass only with churches. “The second gallery is the new, hip, cutting-edge pieces that are really exciting.”

“If you love traditional stained glass, there’s plenty of it and you can get up close. If you like graffiti and street art, conceptual art, sci-fi — come and check out the second gallery. This is stained glass like you’ve never seen it before.”

The companion book — “JUDSON: Innovation in Stained Glass,” by David Judson and Steffie Nelson and available from Angel City Press ($60) — tells the history and range of this great institution. 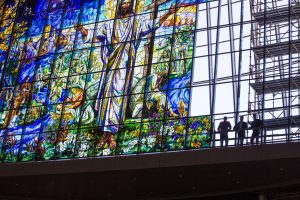 In the Foreword, “The Endurance of Craft,” historian William F. Deverell describes his first visit to the studio:

“I guess I would characterize the response as awe and wonder fused. … A working stained-glass studio … sprawled throughout the many rooms of the building. Design, fabrication, kilns, drawings, cubbies filled with bigger and smaller plates and pieces of glass, frames, furnaces, books, desks, here and there tools, old and new. Humming with quiet attention to detail and design. Reverent, really. I think I knew enough that first visit to know that the work of stained glass is hot, long, hard, and sharp.”

“David Judson is able at the same time to preserve the tradition and also to innovate, evolve, and stretch,” continues Fishburne. “From the beginning, the studio could do the most traditional Gothic, liturgical style. In the ’20s and ’30s, they did stained glass in the arts and crafts style that was so popular in the Pasadena area. They collaborated with Frank Lloyd Wright. They did 2,000 panels in the historic chapel, the Air Force Academy Cadet Chapel in Colorado Springs, like a space-age version of a Gothic cathedral. Today, they’re working with street muralists and conceptual artists.

“The book tells an incredible story. The photography is stunning. Then you get to come to the exhibition and stand a foot away. It’s great to see them lit up. It brings the book to life.”

The exhibit runs through Sept. 12, and includes nearly 100 original stained-glass artworks, preparatory drawings, watercolors, and archival photographs, some of which are being shown here for the first time.

Another cause for celebration: Its opening coincides with the reopening of the Forest Lawn Museum, which has been closed for more than a year.