A priest in despair teaches us to live as Christ

Tell me if this sounds familiar: You’re steeped in the sacraments. You pray more or less unceasingly. You devote yourself body, mind, spirit, and soul to your vocation. And right then, you begin to see the ways you are not good, your seeming inability to be useful in any way you want to be, your seemingly utter failure to abandon yourself.

A book I’ve turned to again and again at such times is called “I Live Now, Not I” (Madonna House, $9.95). The author is Father Patrick McNulty (1931-2015), who after serving for decades as a parish priest, hit a wall, endured a long dark night of the soul, and lived out the rest of his years at Madonna House in Combermere, Ontario, the lay community formed by Russian emigré and mystic Catherine de Hueck Doherty. (I got to meet Father McNulty once and he was delightful).

Again and again, says Father McNulty, we forget that faith is not always an upward journey. We forget that there is no way to life except through death and rebirth. “And the death that leads to resurrection is not just a death, but a sacrificial death, a death turned into an act of love and self-giving.”

“If we were wise we could learn this for ourselves. But we are stupid; and sometimes God has to force it on our attention.” It was forced on Father McNulty in middle age. He’d lived through the “revolution” of the ’60s and ’70s, he’d discovered the limits of political correctness and social justice (as an ideology), he’d become disillusioned with what seemed to him the silence of the Church on important issues, and he was frustrated with his own continuing sin. 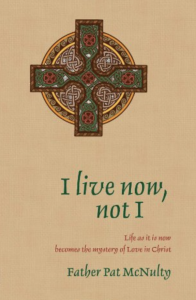 He repaired for a time to a cave in the Sinai Desert but that didn’t work. “I suddenly realized that it was not only my soul I could lose out here but I could also lose my mind as well. Then what?”

By now he’d figured out he was dealing with three levels of pain: one, the pain of the world over which he had no immediate control; two, the pain others had caused or were causing him, knowingly or not, past and present; and three, the pain he caused others because of his own wounds or sins.

With respect to the pain others had caused him, Father McNulty came face-to-face with the abuse (we gather sexual, among other forms) he had suffered as a child. Deep down was still the voice of the wounded child, crying, “How could you have let this happen to me?”

He developed, to his surprise, a devotion to the Sacred Heart, and realized that his suffering can help others. From there on in, “I go to the Sacred Heart and I say to Him, with all my flesh, ‘I am now everyone in the world who is in this same sin/pain/wound that I am in right now. I am them! We are one!’ ”

“Having seen to the very depths of your own ineffectiveness, you will cease to be ineffective. You will begin to live, now not you, but Christ living in you.”

In one especially helpful passage, he proposes a new way of thinking about interpersonal conflict. “Well, if Christ is the focus, then everything is about him and me and not about me and them!”

So we get to let go of all those normal questions like, “Why did they do that to me?” or “How should I deal with them?” or “How can I create my own boundaries when I am around them?”

No! That comes later. “The only question which will bring us life is: ‘Lord Jesus what are you trying to show me about your relationship to the Father through this event, in my flesh, now?’ Period.”

This is an important distinction. In a way, Father McNulty is saying, don’t talk to yourself; talk to Christ. So often we’re trying to figure out how to “handle” a troublesome situation or person either by trying to “discipline” ourselves or to manage and control the other.

And with that, says Father McNulty, we can join the human race.

After a long period of agonizing searching and prayer, one night in solitude, he “heard” these “awesome words”: “It was not you who was being abused. … It was me.”

“We approach the fullness of our union in Christ on earth when we begin to realize that in Christ we too are those who are like us in our pain right now. And in Christ we can cry out as them before the Father, right now, as we are! Not for them — that’s caring. Not with them — that’s compassion. But as them. That’s Love.”