A prayer app for the times

Prior to March 2020, the phrase “prayer app” would have made me wretch.

Forever resistant to technology, I was anti-answering machine (a device from prehistoric times), anti-iPod (remember those?), anti-cellphone, and anti-smartphone. Every so-called advancement seemed to bring us further away from the face-to-face encounter, serendipity, the tactile, the real.

Facetime, Skype, and WhatsApp were never high on my list, either. Then COVID-19 hit, and almost overnight, and along with much of the rest of the world, I became a huge devotee of Zoom.

You could meet with people across the country and the world, in different time zones. You could have birthday parties, brainstorming sessions, mini-retreats!

Zoom Mass is about as poor an approximation of actual Mass as can be imagined, but when the churches, unthinkably, closed, it was a whole lot better than nothing. In fact, I had some unexpectedly deep and moving experiences in front of my laptop during those months when the Eucharist was beyond our reach. And I was grateful.

I’m now pretty much up to speed. Still, the idea of a “prayer app” seemed oxymoronic. The very essence of prayer is silence, solitude, and quiet. Why bring your phone — the essence of all that distracts from prayer — into it?

Ironically, it was while talking on WhatsApp to a friend from Europe that “the way opened,” as the New Agers say. He sent me a YouTube video of some meditation guru who spoke of the RAIN of compassion — Recognize, Acknowledge, Investigate, and Nourish — that I immediately put on double speed so as to get through quicker.

Nonetheless, I did start taking more time out to sit quietly, to be aware of breathing more deeply, to get up and stretch after each hour at the computer. I even signed on for a 30-day 10-minute morning “yoga challenge.” Kassandra presses her hands together and says “Namaste”; I make the sign of the cross and say, “In the name of the Father, the Son, and the Holy Spirit,” and it all works out.

Still, the fact remains that I have probably not slept through the night in decades. I suffer from what a priest friend calls “the curse of Catholic responsibility,” though whatever you call the phenomenon of being on high alert at all times, I had it way before I converted.

Whatever the case, one night, tossing and turning, I thought, “I wonder if there’s a help-you-get-to-sleep Catholic YouTube?” Naturally, there are hundreds, many extremely woo-woo. The one I liked best was 10 minutes long and quite simple: no music; rather, long stretches of silence.

It was put out by an outfit called Hallow, which turned out to be a whole app to which you can subscribe by the month ($8.99) or the year ($45.99). Or you can enjoy the simpler features for free. 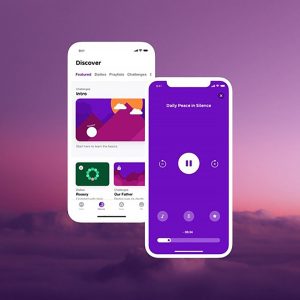 A rendering of the Catholic prayer and meditation Hallow app, which has experienced a dramatic increase in popularity since it was introduced in December 2018. (CNS graphic/courtesy Hallow)

These include a Daily Lectio, Daily Rosary, Daily Saint, Daily Mass Readings, and Daily Reflections. (If you want to pray 2-6 minutes of Morning Psalms with Bishop Barron, that’ll cost). Other offerings include Unguided Silence, Night (though not Evening) Prayer from the Office, and a series of Sleep Meditations.

A subscription will give you access to choose a random few features, to praying the rosary with Mark Wahlburg, Dying and Rising with Jim Caviezel, Prayers for Peace, and an Immaculate Heart Novena. There are lots of music playlists. There are Bible stories. You can form a daily routine all your own, from Morning Prayer on down.

Here’s the fun part: Depending on the content, for the voice you can choose Francis (Deliberate and Calm), Abby (Casual and Warm), or Jonathan (Heartfelt and Engaging) Roumie, who actually played Jesus in the TV series “The Chosen.”

To me, they all sound like vaguely sedated bots. But let’s face it, a “personality” is the last thing you want in a prayer companion.

I’ve come to prefer Anna (British accent) (Gentle and Reassuring), who actually has a bit of life in her. And lo and behold, I have come to “like” Hallow. My favorite feature is the Daily Examen, which is best undertaken at the end of the day.

You review your morning, your afternoon, your evening, which is a real invitation to gratitude. Then: “Were there any parts of the day when you weren’t at your best?” Hah!

“Does any part of the day weigh on you?” These are wonderful questions and wonderfully worded.

And they inevitably help me to pinpoint the times my day started to go south: the rude clerk at Starbucks, for example, whose insult I then in some way took out on the next person. The treasured bowl I broke because I was rushing. The depression into which I sank around 2 p.m. because someone neglected to thank me.

I don’t need an app to pray, but I do need to admit that I’m often guilty of contempt prior to investigation.

Hallow does have its hazards. The other night I put on a sleep meditation and dropped peacefully off only to be jerked awake a minute later. It was Francis, calmly and deliberately intoning, “As our time comes to a close, we thank God for being with us. May the Lord bless and keep you.”