A piece of Venice in Brentwood

Paolo Veneziano (about 1295-1362) was the master of the premier workshop in mid-14th-century Venice and is considered to be the father of Venetian painting.

“Paolo Veneziano: Art and Devotion in 14th-Century Venice,” at the Getty through Oct. 3, is the first monographic exhibit on the artist ever mounted in the United States.

The cornerstone of the exhibit is a reassembled triptych of a kind popular at the time as a means of personal devotion. These small hinged pieces, generally depicting narrative scenes from the life of Jesus Christ and populated liberally with saints, folded flat and opened with the two side-panel-like shutters.

The highly refined panels originally formed a larger ensemble but are now scattered across various collections: “Annunciation” at the Getty Museum, “Crucifixion” at the National Gallery of Art, Washington, D.C., and “Seven Saints” at the Worcester (Massachusetts) Museum of Art.

The reassembled triptych is an almost exact replica of, and displayed alongside the original, on loan from the National Gallery of Parma, Italy. The bottom part of the central panel, however, likely depicting the Virgin Mary and child as in the Parma triptych, is missing. 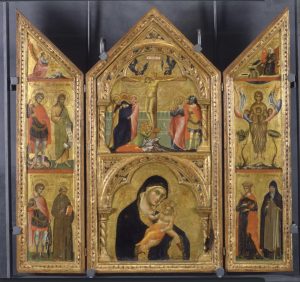 Other highlights of the exhibit include examples of carved ivory, illuminated manuscript, and woven silk also produced in 14th-century Venice.

The project was undertaken in collaboration with The Frick Collection in New York, which has loaned its splendid 1358 “The Coronation of the Virgin” for the exhibit.

Veneziano is often associated with the Byzantine tradition, but his work really resists pigeonholing. He chose as his home base his native Venice, with its rich cultural heritage, over the more au courant Constantinople or Tuscany. In fact, the city was an artistic hotbed at the time, as well as the leading center for the production of painted altarpieces — the idea for which very likely originated in Veneziano’s workshop.

Venice was an important center for the pigment trade. The best ultramarine, or lapis lazuli, came from Afghanistan. This deep, brilliantly saturated blue was much more expensive than gold at the time and was typically reserved for very important commissions: the robe of the Virgin in the Getty’s “Annunciation,” for example.

X-radiography and infrared imaging show the places where, beneath the gesso, gilding, and paint layers, Veneziano pasted pieces of fabric to reinforce unstable parts of the panels. X-rays also reveal holes showing the position of the nails by which the panel was attached to the underlying frame.

The missing panel remains a mystery as do the exact composition, history, and whereabouts of the original altarpiece(s). Following the intersecting trails of the various parts, their arrival at the Getty, complicated by COVID-19, is a drama in itself.

Still, all the external detail began to make me feel the way I did in high school biology class after we’d dissected a frog: I much preferred sitting quietly by the pond and communing with a live frog.

What’s really interesting is Veneziano’s phenomenal flair for visual storytelling. Go to the Getty, or look at a close-up of a photo of, say, his “Crucifixion” — on loan from the National Gallery of Art and in the reassembled triptych forming the upper part of the central panel.

A weeping Mary Magdalene, auburn ringlets cascading, kneels at the foot of the cross to caress Christ’s mutilated feet. To the left, Mary, in lapis hooded robe, swoons, supported by attendants. John, in a garment of rose-pink, lettuce-green, and azure, gazes prayerfully upward.

The richly dressed, well-fed centurion stands to the side of John, eyes on the cross, hailing Christ as Redeemer and King. Two Roman soldiers flank him, one with a paunch and an arrogant pout stares the viewer insolently in the eye. The other gazes sidelong, sheepish, also at the viewer. They are the only two figures who avert their gaze from Christ — and who lack haloes.

Keep in mind that these panels would have been viewed by the light of a flickering candle.

Which made it all the more heartbreaking to learn that, though intended for personal devotion, the costly triptychs were often kept closed in order to protect the inner panels!

So here’s our chance to go to the Getty, whether live or virtually, and to bring the panels from Paolo Veneziano’s workshop alive with our bodies, hearts, and minds. Now’s the time, across the centuries, to marvel at the craftsmanship, gaze at the panels, and descend into the stories they tell.

Or as Mary said, bowing before the angel Gabriel, “Behold the handmaid of the Lord. Let it be done unto me according to Thy word.”