A peek inside Madonna House’s ‘lay community of love’

Madonna House is a lay Catholic community based in Combermere, Ontario, and founded in 1947 by Russian emigré Catherine de Hueck Doherty (1896-1985).

Kathy Rodman joined the community in 1957. (Point of interest: her grandfather, Herman Rodman, was editor of The Tidings, later rebranded as today’s Angelus, in the early 1900s.)

Today there are 190 community members. 61 others have died.

Kathy knew all of them except two.

Does Madonna House have a mission, a charism? She pauses. “I’d say our mission is to form a lay community of love.” Susanne Stubbs, who also came to Madonna House in the ’50s, adds, “I’d say our primary purpose is to love one another and show that love to the world.”

By 1932 Doherty, or “B” as the old-timers call her, had arrived in Toronto and established a soup kitchen called Friendship House. In 1937, she established another such house in Harlem.

Laypeople back then were supposed to “pray, pay, and obey,” but B felt Christ was calling her to care for the poor. “That’s what she started to do in Harlem during the Depression. Mothers, young children; she made efforts in terms of interracial justice.”

In 1947, B and her husband Eddie Doherty, a newspaper journalist, came up to Combermere. With no doctor close by, and her nurse’s training, she delivered many babies for the rural poor. 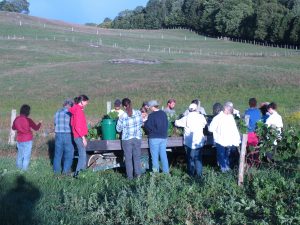 Then, in 1951, Doherty attended the World Congress for the Lay Apostolate in Rome. Spearheaded by Pope Pius XII, it was the first such gathering in the history of the Church. She learned about the possibility of forming lay groups that would take vows of poverty, chastity, and obedience. So much needed to be worked out. What would the bishop say? Could people leave to get married?

A community formed and slowly grew. Doherty’s vision expanded with it. “By the early 1970s she was saying, ‘Forget the over focus on social justice. The greatest poverty in the world right now is loneliness.’ ”

She wrote Poustinia — a Russian word meaning desert — in the mid-1970s. A call to silence, solitude, and prayer, the book has been translated into several languages and still sells briskly. While moving toward the contemplative life, however, she never sacrificed the active. Two of Madonna House’s main satellite missions, for example, are soup kitchens, and members consistently provide many works of mercy for the people of their cities and towns.

I visited the house in Combermere several years ago and was awed by the community’s self-sufficiency. They grow or raise almost all of their own food. St. Benedict’s Acres, the community farm, boasts vegetable beds, cows, chickens, and sheep whose wool is sheared, cleaned, dyed, spun, woven, and knit into products for gift shops.

They mount theater and musical productions. They have a handicraft department, an outdoor wood-fired kiln for pottery, iconographers, and more than a dozen looms. 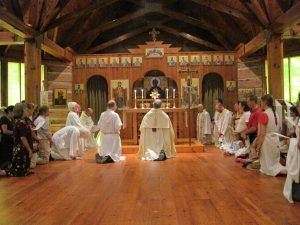 At Easter they make pysanki, elaborately decorated eggs that are a strong tradition in Ukraine. “A beautiful pysanka egg, they say, pushes back the darkness. So we prayed especially deeply this past Lent.”

Everything is neat and in its place. “Good order brings peace,” B always said. “It echoes the tranquility of God’s order.”

Those discerning whether to join the community first stay for a time as a working guest. Should they wish to continue, they then serve two years as an applicant (no internet is allowed during that time), then seven more years on temporary promises, living either in a dorm at Combermere or at one of 16 mission houses spread throughout Russia, Belgium, England, the West Indies, Canada, and the U.S.

After that come final promises: poverty, chastity (celibacy), and obedience. The constitution has been approved by the local bishop and is in full accord with Rome.

The daily schedule is anchored by the Eucharist, prayer based on the Liturgy of the Hours, and the three meals that are served and eaten together as a family.

How does the community support itself? “By begging. B often reminded us of how well God provided for our needs, both financially and in terms of goods.”

It’s a life of hard work — but the main work is prayer, with and for the world. “Say you have to weed the garden. Hour after hour that can get pretty arduous. We often stop and read a little meditation, though. After a while you begin to offer your weeding for others. You begin to identify with the migrant worker; the mothers and fathers who are caring for and raising children, the people in prison.”

“It’s disciplined. Our time is quite scheduled. We share maybe 10 computers among 50 people. It’s a radically different kind of living, countercultural in the best sense.”

“We’re quite stable at this point. The community grew out of a need. And I think the Holy Spirit gave certain people the gift for this kind of life.”