‘Jesus, is that you?’ Inside LA Men’s Central Jail on Christmas

After the first group of 33 inmates filed into the chapel of LA Men’s Central Jail the morning of Dec. 25 came the first Christmas surprise: due to an unspecified “situation” at the jail that morning, they’d be the only ones at Mass with Archbishop José H. Gomez this year.

The only ones, that is, apart from the armed LA County Sheriff’s deputies keeping watch from the windowless chapel’s choir loft.

As their special pale green jumpsuits indicated, these chosen few were a group of jail “trustees,” inmates whose good behavior and personal improvement has earned them smaller freedoms — including work in the kitchen — outside of their cells. This morning, several were wearing plastic rosaries around their tattooed necks for the occasion. A few brought bags of them in hopes of getting them blessed later.

Once the Mass began, cues from a female cantor and jail chaplain Father Paul Griesgraber told them when to stand. When it was time to sit, some of the inmates fidgeted in the scarred, creaky pews. Others closed their eyes in prayer. Most tried mouthing the Christmas carols in their printed booklets. 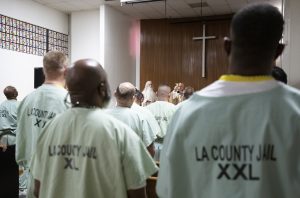 After hearing Luke’s account of the birth of Jesus in the Gospel, the day’s celebrant had little trouble keeping their attention.

“Christmas is the promise that God cares personally for each one of us, that he’ll never leave us alone,” began the archbishop during the homily.

The archbishop explained that God chose to come to the world as a baby, “so that he doesn’t frighten us.” This same Jesus wants to give us the strength and grace to “live our lives as a living Nativity scene,” he assured them, and all we have to do is ask for it.

Due to the pandemic, this was Archbishop Gomez’s first Christmas Mass at the jail since 2019. As witnesses from past years can attest, the day’s message gets across rather easily to this crowd.

Jail chaplain Steve Borja, an evangelical Christian with a background in counseling, was among those at the Mass. Even during the first months of COVID-19 he was allowed to walk the “tiers,” or cell rows, to visit inmates. His Catholic counterpart, Edgar Jimenez, later arrived to join him in the summer of 2020.

“When we were coming in, they were actually surprised to see a chaplain,” recalled Borja. “It was a dark gray time inside the jail.” 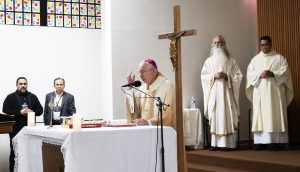 Although different in their approaches to ministry, the pair found themselves in high demand during the pandemic. Jimenez said the inmates valued the in-person contact in a time of isolation.

“I wasn’t afraid of reaching out and shaking their hands,” said Jimenez. “That right there, it means a lot to them, and to me as well.”

After the Mass, Archbishop Gomez was allowed to do the same. As in years past, he walked through two of the more restricted cell rows on the jail’s third floor. This time he handed out a prayer card with the words of Our Lady of Guadalupe to St. Juan Diego and a copy of “The Whole Language: The Power of Extravagant Tenderness” (Avid Reader Press / Simon & Schuster, $27), the latest book by Father Greg Boyle, founder of Homeboy Industries.

The scene on the third floor of the jail — among the “worst of the worst” in the country, according to the chaplains — was not exactly uplifting. Plastic wrappers and used Styrofoam cups littered the floors of several cells. Plenty of images were attached to the walls — some of family members, others of favorite sports teams, and still others that shouldn’t be described here. Behind the extra orange jumpsuits hung up between cell bars for privacy — a forbidden practice known as “tinting” — colorful words could be heard. 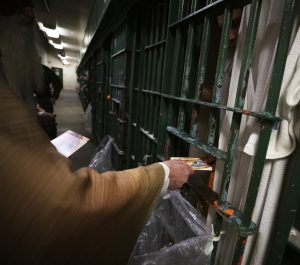 Archbishop Gomez hands an inmate a prayer card with the words of Our Lady of Guadalupe to St. Juan Diego after Christmas Mass on Dec. 25, 2022. (Victor Alemán)

One by one, the archbishop handed them their gifts, gave blessings to those who asked. He took his time to stop and chat with some, either in English or Spanish.

Walking with him were several deputies, the jail captain, and Father Griesgraber, whose long white hair and beard (not cut since the start of the pandemic, he said) has made him a jail celebrity.

“Jesus, is that you?” exclaimed one inmate as Father Griesgraber approached his cell alongside the archbishop.

“Yeah, Jesus is right here,” the archbishop shot back, catching the joke directed at the man some call “Father Gandalf,” a reference to the gray-bearded protagonist in the J.R.R. Tolkien novels, “The Hobbit” and the “Lord of the Rings.” The inmates and deputies erupted in laughter together.

Once the archbishop had visited the two pre-assigned cell rows, yells could be heard in the next one over. They had heard the commotion and wanted to see the visitor, too. With just a few seconds to decide, the guards in the entourage looked at one another in hesitation. “Why not?” seemed to be the unspoken consensus.

After it was all over and Archbishop Gomez had left to celebrate his next Christmas Mass at the Cathedral of Our Lady of the Angels, Father Griesgraber offered his assessment of the morning’s proceedings. 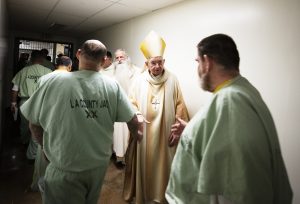 What came to mind were the words of the archbishop’s homily, delivered in terms the inmates could understand: the weakness of a newborn baby, the beauty of a family, and the importance of “not doing what we want, but what God wants.”

“Archbishop relates at that level with them,” the priest said. “He’s got a special way of relating.”

“You feel the spirit of God coming when you give them that chance, not by analyzing them, or giving them all the answers, but acknowledging them as children of God,” said Jimenez. “That’s a game changer, but you gotta give ’em that space.”

Space, among other things, was a big challenge in the jail, too. But soon after the pandemic hit, thousands of low-level offenders were released from facilities around the county. That, along with the new, more lenient policies of new District Attorney George Gascon, has seen the jail population fall from its 5,000-plus capacity to around 4,000 inmates. 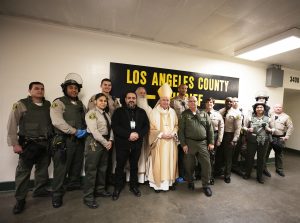 LA Men's Central Jail staff pose with Archbishop Gomez at the end of his visit the morning of Dec. 25, 2022. (Victor Alemán)

“Now we have a different clientele that’s slightly more challenging,” said Jimenez, choosing his words carefully. “But once you get to know them, interact with them, then you start to break down that wall.”

Father Griesgraber has served at the jail for the last five years. He’s learned to take things slowly with the inmates that request his services. Eventually, some Catholics will ask for confession or permission to attend weekly Mass — but only when they feel ready.

“We move gracefully into the sacraments,” said the chaplain.

What impresses him the most? Hearing the prayers, he said, of men who know the wrong they’re capable of doing, and the hurt they’ve caused.

“They pray much better than I do,” said Father Griesgraber. “They’re praying out of their wounds.”