The unprecedented, astonishing sight of thousands upon thousands of men, women, and children taking their meager lives into their hands and filling the streets of crumbling towns across Cuba has transfixed the world.

Unarmed and thinly clad before the heavily equipped agents of the government, they have bravely dared to ask for that shining thing they’ve been denied for so long: freedom. They often carry an image of Our Lady of Charity, the patroness of Cuba, before them. In solidarity, their brothers and sisters just miles away in Miami flooded Calle Ocho, the mainstreet of Little Havana, and filled the Miami shrine to the same lady with their fervent pleas.

The phrase on everyone’s lips, sung and chanted, in Miami and in Cuba, is “Patria y Vida” (“Homeland and Life”). It is the title of a reggaeton song by a group of young Afro-Cuban men who have tied up all the grief and longing of millions of oppressed people into one lyrical cry.

The Communists who seized power 62 years ago declared “Patria o Muerte” (“Homeland or Death”). The new generation, they tell us, is choosing life. They know that it is a choice now as it was thousands of years ago when the words inspired by God were written into the Scriptures: Choose life, that you and your children may live.

The singers, like so many of their compatriots, are strong, talented, and young, but trapped in a world destitute of everything, but especially of hope.

“Who told you that Cuba is yours?” they sing, addressing the island’s rulers. “It belongs to the people.” They intone the tragic injustice of a tiny ruling class enjoying in dizzying abundance every material good the world has to offer while in their own homes “las cazuelas ya no tienen jama” (“the saucepans have no food”).

At the point of a pistol and for decades, they tell us, they’ve been trampled, and fed not with food but with lies and evil ideologies. The holdovers of the “malignant” revolution of 1959 keep advertising the paradise of the legendary beach of Varadero, while the mothers weep for the sons and daughters that left the island in despair.

There they were, early this week, their sons and daughters, on the main street of Little Havana in Miami, belting out “Patria y Vida” with the same fervor, the same urgency. They waved Cuban flags in one hand, the stars and stripes of their new country in the other. They grabbed percussion instruments on their way out the door, if you can call a pan and a wooden spoon “instruments.” 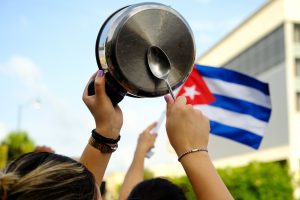 A demonstrator in the Little Havana neighborhood of Miami bangs on a pot July 12, 2021, as people rally in solidarity with protesters in Cuba. (CNS photo/Maria Alejandra Cardona, Reuters)

They produced a glorious beat, hundreds of them, maybe thousands, as countless cars and trucks drove by slowly, festooned with more flags and signs painted with the motto of the occasion. As in all gatherings of Cubans, the rhythm found its response in bodies whose knees can’t help but bend and hips to sway.

As the week of demonstrations in Cuba wore on, the news from the island became darker and more tragic. Short videos that have made it past the country’s new near-total internet ban depict a grim situation.

Instead of energized, demanding crowds, shocking images of brutal repression: a man shot in his home in front of his wife, boys of 12 to 15 years dragged from hiding places to be conscripted forcefully into the army, savage beatings, long lists of the “disappeared,” streets empty except for menacing groups of black-clad paramilitaries. Everywhere fear, grief, and the empty eyes of those who have hoped for a moment, but in vain.

It is clear to Cuban Americans that their island brethren have touched bottom after 62 long years of immiseration, despair, dreams of escape, the dislocation and separation of exile. On the island the pandemic has closed the doors of tourism, for some time now the oxygen of the dictatorship.

The Cubans stifle in their moldy, crumbling houses waiting for COVID-19 to strike, knowing that the hospitals can’t even count on running water or electricity, let alone the treatments that could save them. Their rulers have refused humanitarian medical aid, including vaccines.

In the meantime, here and in Cuba, we sing “Patria y Vida,” a song but also a prayer. We pray with a faith that cannot be exhausted by time or grief to the same Lady: Nuestra Señora de La Caridad del Cobre. More than 500 years ago she visited the shores of the jewel of the Antilles that is Cuba, to save the lives of her poor and ragged children. Surely she will come again.