I was scheduled to attend the performance of the play described below on Sunday, March 13. But like just about everything else in these uncertain times, the opening has been postponed and the show was canceled.

But the concept is interesting in its own right, and we could probably use the encouragement from the lives of the saints, so here you go.

“Poor Clare” is a play by Chiara Atik that offers a “funny, powerful, modern spin on the Middle Ages.” Alana Dietze (“Dry Land,” “The Wolves”) directs. Chris Fields is the artistic director.

Here’s the setup: “Clare is just a regular noblewoman living in medieval Italy, trying out hairstyles and waiting to get married … until a man named Francis starts ranting in the courtyard. ‘Poor Clare’ is about what happens when your eyes are opened to the injustice of the world around you — and you can’t look away.”

The play, set in 13th-century Italy and based on the story of St. Clare of Assisi, is nonetheless totally relatable in today’s culture. Clare and her sister Beatrice (Troy Leigh-Anne Johnson and Donna Zadeh), like teens down through the ages, are obsessed with fashion, boys, and local gossip. Being rich, the girls also discuss these topics with their live-in help (Kari Lee Cartwright and Martica De Cardenas).

Like today’s young people, they’re also aware of the suffering of the world and along with their mother, Ortolana (Ann Noble), try to “give back” by organizing clothing drives and food distribution.

Then Clare hears that a local boy, Francis (Michael Sturgis) has stripped naked in the town square as a protest against poverty. While first professing to find his actions grandstanding and “dumb,” she eventually sees them as intriguing, and the story is off and running.

As director Dietze observes, “The system that created wealth inequality then hasn’t really changed. Listening to the characters, it feels like it could be me or any of my friends talking — which is really fun when it’s juxtaposed with period costumes and design.” Atik’s other plays include “Five Times in One Night,” “Bump,” and “Women,” a takeoff on Louisa May Alcott’s “Little Women” combined with HBO’s “Girls.” 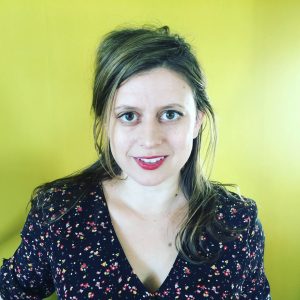 Her connection to the play is intensely personal.

“My mother’s Italian and her family is from a small town in Umbria about 45 kilometers from Assisi. So I spent a lot of time growing up there. My name, Chiara, is Clare in Italian. Everyone in the Assisi area of course knows the story of St. Clare, and St. Francis is popular in the U.S. as well. So from a very young age Clare was a saint I was particularly drawn to.

“Cut to now. I was having a lot of conversations with friends about things in the world we wish we could fix. We were doing a lot of hand-wringing and feeling bad about, say, the refugee crisis, or income inequality … truly feeling awful about it. But I, for one, was also aware of how little I was actually doing to help, how little I felt I could do, and most to the point, how little I was changing or altering my life in any way.”

The hand-wringing led her to start thinking back to the story of St. Clare. It became newly remarkable that, 800 years ago, an 18-year-old girl struggled with the same issues and had the same conflicts that Atik and her friends were struggling with in 2020.

Unlike most of us, however, St. Clare didn’t just feel bad about the state of the world. “She had the conviction, and the strength, actually to sacrifice for what she believed in.”

During rehearsals, the Echo Theater Company cast that had planned to perform the play at the Atwater Village Theater ended up having discussions where people asked, “Should we all be doing what St. Clare did?”

“My answer is, not really,” says Atik. “Her actions were so, so radical and so extraordinary. That’s why she’s a saint. I’m not sure we all could or even should emulate Clare. But I certainly hope her story is inspiring and invites people to question what more they could be doing.” 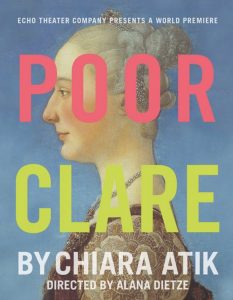 For 800 years, the Church has been very clear on the fact that St. Clare and St. Francis were strictly spiritual companions.

“But for 800 years,” adds Atik, “there have also been questions: When did they meet? Did they have many conversations? I don’t think anyone has suggested anything untoward. But there have been whispers: Was she in love with him? Or was she truly moved only by his message?

“That was really fun for me to play with; imagining the meetings between these two young people. What could have transpired that led to her giving up everything in her life, becoming a nun, taking a vow of poverty? Once she took the vow, they saw each other and shared a meal perhaps one more time, years later. But that’s it.

“Those speculations aren’t really in the play, but that’s the subtext. In the play, St. Clare really has her own convictions. Clare undertakes her own journey.”