What’s next for Christians in the Middle East?

The future of the Iraqi Christians stands now on a precipice.

The coming months will likely determine whether they are pushed fully into the abyss or whether the few slim reeds of hope remaining are able to take hold enough to give them still a chance for survival in their homeland, where they have practiced the Faith since it was brought to them by the early apostles in the first century A.D.

A largely Eastern Rite Catholic population (many still using Aramaic, the language of Christ, in their liturgy and daily life), the Iraqi Christians numbered approximately 1.3 million in 2003 at the time of the U.S. invasion.

Most estimates now place the number countrywide at less than 200,000, with some estimates far lower even that that. On this current trajectory, their disappearance in our lifetimes from the world’s cultural and human tapestry remains an entirely possible, however tragic, outcome.

In understanding the current plight of the Iraqi Christians, it is necessary to examine the three remaining population clusters as each group faces unique challenges, in addition to the overall pressures resulting from the myriad forms of violence and persecution inflicted upon them over the centuries.

In the remaining Christian towns of Nineveh, which remain within the Iraqi federal government sector, the towns are virtually surrounded by elements of the Iranian backed Hashd al-Shaabi units. These units are paramilitary forces, mainly Shia Muslims loosely responsible to the federal government in Baghdad, but taking much of their direction and control from pro-Iranian factions and even Iranian actors themselves.

It is the workings of these Iranian-backed paramilitary forces, and the Iranian leadership of them, which lies at the center of much of the current standoff between the U.S. and Iran. Originally formed for the purpose of fighting against ISIS, these units have remained intact even after the war and have sought to retain much of the power and control in the Christian areas of Nineveh.

In exercising power, these units have exhibited varying degrees of anti-Christian hostility, which has had a significantly negative impact on the ability of the Christians to safely return to their former homes there. In any further escalation of the struggle between the U.S. and Iran, these fragile Christian communities are certain to suffer directly and the risk of retribution attacks is real. 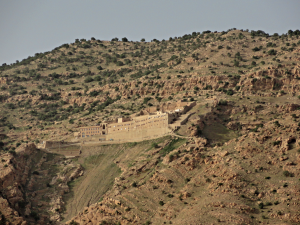 The Monastery of St. Matthew is located atop Mount Alfaf in northern Iraq. It is recognized as one of the oldest Christian monasteries in existence. (Wikimedia Commons)

Meanwhile, in the Kurdish sector, which includes the Kurdish capital of Erbil, Christians have been largely safe from overt attacks and pressure. It was, in fact, to Erbil and the Kurdistan region that many of the displaced Christians of Nineveh and Mosul initially fled in 2014 during the onslaught of ISIS terror.

Many of the displaced families have since decided to remain in Erbil due to the continuing uncertainty in Nineveh. There in Erbil, and in smaller numbers throughout the Kurdistan region, the Christians have sought with varying degrees of success to preserve their way of life and identity.

It is worth noting, however, that among the targets fired at in the recent Iranian missile strike was the city of Erbil. In fact, the main Christian enclave of Ankawa, located on the northern edge of Erbil, is less than a half-mile from the U.S. and coalition base where the Iranian missile landed.

Residents of the McGivney House apartment complex, funded entirely by the Knights of Columbus as a means of providing critical support to the beleaguered homeless Christians, felt the impact of the missile strike from their rooms.

Further south, in Baghdad, the escalation between the U.S. and Iran temporarily risked overshadowing what is certainly the greatest remaining hope of long-term viability for the Christian population of Iraq.

This hope comes in the form of the massive public protests, originally led by young disaffected Shia Muslims who, beginning in October 2019, launched largely nonviolent yet vigorous demonstrations throughout southern Iraq against the corrupt, faction driven political leadership that has existed in Iraq since 2003.

The protests soon swelled and are acknowledged today even by most politicians themselves to represent the majority of the Iraqi people.

A primary target of the protesters has been the influence of Iran and the Iranian-backed political leaders and paramilitary units who, in the view of the protesters, have used Iraq and its oil wealth not for the benefit of the people, but simply as a cynical means of stealing wealth and securing power for their factions, leaving the vast majority of the country and its youth without work or a visible future.

In this, one of the key demands of the protesters has been the end of political Islam and the existence of religious factions.

For the Christians of Iraq, this massive Shia Muslim-led uprising has brought with it an astonishingly unexpected opportunity for hope. In demanding an end to political Islam and the corruption and factional violence that has accompanied it, a realization and acceptance by the young Muslim population of the importance and legitimacy of Iraq’s historic minority populations has come seemingly from a place of no prior hope.

Seeing perhaps their final opportunity to still stake a place in Iraq, the Christians, including church leaders, have sided openly with the protesters and against the corruption and power grabs of the current government. Christians now march prominently alongside Shia Muslims in the demonstrations in Baghdad and throughout the south of Iraq.

These protests have not diminished and stand now on the verge of forcing the Iraqi government into the beginning of change which, if properly supported and acknowledged by the international community, may yet provide a future for a new Iraq of legitimate hope for both Christians and Muslims alike. 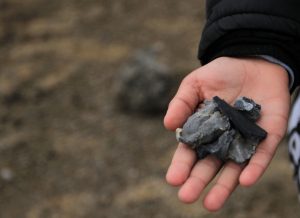 A man holds shrapnel from a missile launched by Iran on U.S.-led coalition forces in the Iraqi province of Dahuk Jan. 8, 2020. (CNS photo/Ari Jalal, Reuters)

The recent conflict between the U.S. and Iran might easily have eclipsed this nascent movement had things escalated further. Fortunately, in the current stand-down it appears that the protest movement has not lost its momentum, and plans remain for continued pressure on the federal government for new elections and constitutional reforms that at least provide a chance for Iraq to finally leave the ranks of broken and failing states.

Under the relentless and paralyzing pressure of the protest movement, the current prime minister has already announced plans for his own resignation pending new elections.

Where does this leave Iraq and its Christians? Much of their future now hangs in the balance, and much of the responsibility for the outcome now rests with the Iraqi people themselves. For now, Iraq seems to have dodged becoming the battleground for full conflict between outside powers.

The struggle in front of the Iraqis now is whether they will succeed, through the pressure of the protest movement, to bring about legitimate change and restore control of their country to themselves, or whether the Iranian-backed factions will simply resume their efforts, perhaps laying low for a time, but ultimately using the tactics of violence and intimidation that they have exhibited since the outset of the protest movement.

In a story that has received remarkably little attention within the U.S., shadowy elements of Iraqi security units, alleged by protesters to be thinly disguised members of the Iranian-backed militias, stand accused of being responsible for the murder of more than 600 unarmed demonstrators since October 2019, and the wounding of thousands.

In most cases, these protesters have been shot by snipers or killed by the use of military-grade tear-gas canisters fired directly at crowds with lethal effect.

Iraqi Christians are under no illusions regarding any of this. An ultimate failure of the goals of the present protest movement combined with the survival of the Iranian-backed faction government would mark the closing of the door on any remaining hopes for the revival of a Christian future in Iraq.

Such a failure would leave Christians only a caretaker presence inside the Kurdistan Region, at most.

A final, separate, and fully overlooked tragedy remains ongoing for the Iraqi Christians.

In the aftermath of the ISIS genocide, hundreds of thousands of Iraqi Christians fled the country, having no place safe to go or remain. The fortunate among these eventually reached the West or Australia, but these were very few. 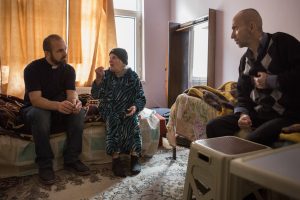 In all these countries, the Iraqi Christians are prohibited by local law from seeking employment, and in many cases they are the victims of systemic discrimination within the international refugee process, resulting in a status where for many they exist on paper but have no active resettlement cases pending.

This population of these Christian refugees may number up to 200,000, and their plight does not exist on any political radar screen anywhere in the U.S. Their cause as yet remains largely ignored by both U.S. government policymakers and Western social advocacy groups alike.

For the Christians still in Iraq, their hope is not yet completely lost if they can be spared from the precipice they now face. Despite the many existential threats facing them, those still remaining are a tenacious people with a deep faith that has been scourged and tested now in every way, a people who seek desperately to remain in their ancient homeland.

As Archbishop Bashar Warda of Erbil, Iraq, regularly answers to those who ask what they can do to help, “Please, first, pray for us and do not forget us.”

Stephen M. Rasche is vice chancellor at the Catholic University in Erbil, Kurdistan Region, Iraq, where he is director of the Institute for Ancient and Threatened Christianity. He is the author of the upcoming book “The Disappearing People: The Tragic Fate of Christians in the Middle East” (Post Hill Press, $27).