I am not a frequent reader of GQ magazine. In fact, I don’t know if I ever read a story in the slick and stylish monthly until I happened upon a copy at a hospital while waiting to talk to a patient in conference with his doctor. I suspect that I am not part of the demographic targeted by the magazine’s advertising department.

After skipping the pages of fashion models in the September issue, I opened to a story about John Chau, the young American Pentecostal who lost his life in the Andaman Islands off the coast of India last November, written by Doug Bock Clark, an A-list long-form magazine writer.

I remember the news stories from last year. Many of the stories emphasized that Chau had disobeyed the Indian nation’s quarantine of North Sentinel Island and that his missionary zeal was fanatical and dangerous to the people he hoped to save.

His one objective, according to the piece, was “to convert the uncontacted Sentinelese tribe, who had lived for centuries in isolation, free from modern technology, disease, and religion.”

The mainstream media often caricature religious people, but Clark kept any prejudices in check for most of the article. John Chau was brought up in a middle-class Pentecostal family, his father a psychiatrist and his WASP mother a lawyer who worked raising funds for Jerry Falwell.

Chau was sent to Evangelical Christian schools and ended up at Oral Roberts University in Tulsa, Oklahoma, which is known for producing alumni who go to the mission fields.

Chau had missionary zeal and had read about the people living on North Sentinel Island. He decided that God was calling him to evangelize them. They represent one of a handful of groups of people around the world who have no real contact with modern human civilization.

Evangelicals keep their eyes on such people because they interpret the delay of Christ’s Second Coming as having to do with the preaching of the gospel in every language and culture. (That is why we owe them for so much brilliant work in translating the Bible in different tongues.)

Chau put a lot of work into preparing himself for the mission, not only studying missiology and language, but also visiting the Andaman Islands off the coast of India three different times.

In his last stay at Port Blair, a tourist town on another island of the archipelago, Chau stayed at a $13-a-night hotel for international vagabonds. He made contact with local Christians, carefully studied the logistics of landing on a place guarded by the Indian Coast Guard, and prayed and reflected on his curious sense of mission.

His father wrote that “John became the victim” of “the irrational religious and glamorized ambition of adventures of exploration.”

Chau’s father felt that “professional” problems (sed contra: the author of the article seems to think that the missionary’s parents had a tense relationship) had not permitted him to have the right influence on his son during his high school years and, as a result, the youth had been swallowed up by a fringe of the “fanatical Evangelical extreme.”

Chau’s siblings became doctors like their father. His mother is not quoted in the article except to imply that she seems to doubt that her son died.

In November 2018, Chau paid some fishermen $350 to drop him off on North Sentinel Island. He paddled to the shore in his kayak. He brought gifts with him as he had heard anthropologists had done in the past. Although he could not speak their language, he attempted to witness to Jesus Christ to the Sentinelese. 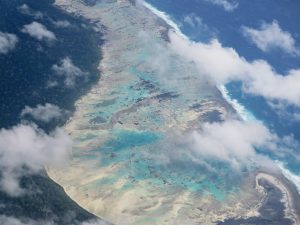 Sensing their hostility, he turned to paddle back to the fishing boat but then noticed men stealing his kayak. A young man shot an arrow at him that hit his waterproof Bible. Chau swam back to the fishermen waiting in their boat. He told them the Bible had saved him and it was a sign from God to continue his mission.

He wrote in his journal, then slept that night on the fishing boat. In the morning he stripped down to a pair of black shorts and swam to the shore of North Sentinel.

The fishermen in the boat passed the next day and saw a body on the shore. It was never recovered despite the international reporting on the issue. Chau himself had written that no one need worry about his body were he killed.

Was Chau wrong to attempt the evangelization of the Sentinelese? His case is controversial and in some of the dark corners of the internet there is a kind of malicious glee about his fate.

He was invading Eden, corrupting the Noble Savages with religion, who, it was claimed, have “fewer mental health issues” than outsiders. He has been called “puritanical, prejudiced and patronizing,” and vilified on YouTube and other internet sewers.

I have no doubt that Chau was a devoted Christian, more a “missionary and disciple” than many Catholics. In fact, I contrast his desire to make Christ known with a priest missionary to Africa who told me this summer that his work was more about human needs rather than conversion to Christ.

“You work with a tribe that survives partly by mixing milk with the blood of cattle — you can’t get those people to understand the Eucharist and the blood of Christ?” I asked him. “We’re more concerned with teaching them to read and write and [providing] health care,” he answered.

They tell a story in Latin America about a religious order that rebuilt a whole section of a slum in Caracas. When the construction was done and the place was visited by donors, the majority of the residents had ceased to be Catholic.

“Why have you become Pentecostal when the padres did so much good for you?” the beneficiaries were asked. “They helped us live better here,” the answer went, “but the others offered us eternal life with Christ.”

The prejudice against Chau and others like him is a Trojan Horse for Catholics: Allow it to enter the gates in the name of sophistication or tolerance, and it will end up destroying the city.

Perhaps the problem was Chau’s ecclesiology, his Lone Ranger approach to mission. But the fact that he was trying to do a good thing teaching people who did not know Christ about the Gospel cannot be denied. The knowledge of Christ has an infinite value that makes all else unimportant (cfr. Philippians 3:8).

When I got into see my parishioner, he introduced me to his doctor. He said, “I’ve got the best of both worlds, a Jewish doctor and a Catholic priest. How can I not get better?”

He didn’t know I was half the world away off the coast of India, thinking about a young missionary. Even GQ can make for thought-provoking reading.