The people of Nicaragua are facing an increasingly challenging situation, from the nightmare of the COVID-19 coronavirus pandemic, which the government has resisted acknowledging even exists, to an active oppression of the Catholic Church, today the strongest voice sounding the alarm against the virus in the country.

It doesn’t help that the country’s government has fueled hostility against Catholics by either not preventing or, even worse, favoring recent attacks against churches: many Catholics have told Angelus that as a result, they are afraid of going to church to pray.

The latest of these attacks came on July 31, when a Molotov cocktail was thrown inside a chapel within the cathedral of Managua, Nicaragua’s capital city. A hooded man came in and, after shouting “I come for the Blood of Christ,” threw the homemade explosive device at an image of Christ crucified that has been venerated in this Central American country for centuries.

Vice-president Rosario Murillo, wife of President Daniel Ortega, said only two hours later that the image had burned due to several votive candles nearby lit by the faithful and denied the presence of an assailant. That contradicts the account of two women who witnessed the attack while taking part in Eucharistic adoration. The following day, they were arrested and the government stood by the idea of an accidental fire.

Cardinal Leopoldo Brenes, archbishop of Managua, said the attack was “terrorist in nature” and that the destruction of the chapel, that included the wooden carved image as well as the Blessed Sacrament, was the result of a “criminal act.” 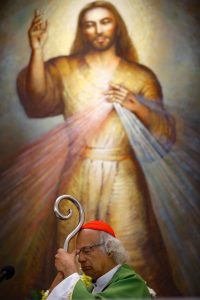 Cardinal Leopoldo Brenes Solorzano of Managua, Nicaragua, prays as he concelebrates Mass in 2018 at Divine Mercy Catholic Church in Managua. The Mass was celebrated to pray for protesters who took refuge in the church after coming under gunfire from armed pro-government supporters. (CNS photo/Oswaldo Rivas, Reuters)

Pope Francis prayed for Nicaragua on the Sunday following the attack against the cathedral, and sent a handwritten note to Brenes, who read it during a live-streamed Mass he led that same day, as part of a “Day of Silence and Prayer.”

The opposition coalition, called Alianza Civica (Civic Alliance) also came to the support of the Nicaraguan’ bishops, saying that prelates have been “an example worthy of morality and dedication for Nicaraguan families, accompanying us in the most difficult moments.”

Nicaragua has been on edge since protests erupted in spring 2018 demanding Ortega leave office and allow early elections. Ortega officials consider such demands tantamount to an attempted coup led by the Catholic hierarchy.

Various international human rights organizations have denounced the government of Ortega, labeling it a “dictatorship” that has oppressed many freedoms: from religious freedom to freedom of speech. In fact, even being seen in public with the Nicaraguan national flag is considered a crime.

As one Nicaraguan bishop put it to Angelus, Catholics in Nicaragua today see “constant violations of their human rights,” and that the government is increasing its oppression against Catholics because the bishops wouldn’t keep silent about the seriousness of the COVID-19 pandemic.

The government denies the spread of the coronavirus in Nicaragua, home to some 6.5 million inhabitants. According to official numbers, 100 people have died as a direct result of the virus. However, the Independent Citizen Observatory COVID-19, a network of doctors and volunteers, have reported over 2,500 deaths of people who had the symptoms of the virus. Yet due to the lack of testing kits, most people die without a diagnosis.

Ortega leads one of a handful countries that hasn’t cancelled schools to stop the spread of the pandemic, and during the first months after the first cases were reported, there were government-backed flyers claiming that the people of Nicaragua were stronger than the COVID-19 and that life should go on as usual, because “God will spare the country.”

Several Catholic bishops, including Brenes and Bishop Rolando José Alvarez of Matagalpa, opened Church-run centers to tend to patients with COVID-19 symptoms only to see them closed soon after by the government.

In the words of a priest who’s received several death threats in recent months for being an outspoken opponent of Ortega, the people of Nicaragua today “are experiencing an increasingly difficult situation, a nightmare from which I fear we might not wake up.”

Meanwhile, the government denies knowledge of the attacks against the Church. Many have occurred in the past month, with several other attacks peacefully stopped by the faithful. There have even been reports of a secret plan to have a “Nicaragua without Catholic Churches.”

These are just but a handful of examples of how the government is trying to put a muzzle on the Catholic hierarchy, not only for their role in protecting the protesters oppressed with military tanks back in 2018, but for warning the population of the danger of the pandemic. Though school has continued, Masses with the presence of the faithful have been suspended.

As the ashes of the Blood of Christ were still warm, there was an attempt to steal a widely revered image of St. Dominic de Guzman that is celebrated during an 10-day festival that explodes in the streets of Managua every year. The Spanish saint is to religious Nicaraguans more or less what St. Patrick is to the Irish: the saint’s likeness is tattooed on their bodies, graffitied in public spaces, and adored as “Minguito” during the festival in his honor.

Even though an estimated 70 percent of Nicaragua’s population are Catholics, many in the country today nevertheless believe that being Catholic and aligned with the bishops is virtually synonymous with being a criminal, or, at the very least, a potential enemy of the state. 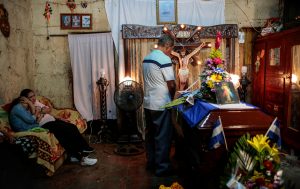 The relationship between the Catholic church in Nicaragua and the government is a complicated one. In the 1970s, many priests allied themselves with the Sandinista National Liberation Front (FSLN)- Ortega- to bring down the Somoza dynasty, which ruled the country for six decades.

But the case today is different. The institutional Church in Nicaragua is not allied to anyone, yet denounces the injustice of those who are suffering and being oppressed, in the hopes of fostering reconciliation.

At a time in history when confrontation seems to be the default approach to any challenge, the bishops of Nicaragua, one prelate told Angelus, are calling on Catholics to follow the Gospel in the most radical of ways: “turn the other cheek; forgive your enemy seven times seventy; and Blessed are those who are persecuted because of righteousness, for theirs is the kingdom of heaven.”

Pope to UN: Respect for each human life is essential for peace, equality