Back in 2014, the terrorist organization known as the Islamic State, or ISIS, threatened a violent conquest of Rome from the Iraqi city of Mosul. Seven years later, however, the bishop of Rome has achieved the reverse, visiting the war-devastated city of Mosul and conquering it, not through force but as a pilgrim of peace.

Pope Francis’s March 5-8 trip to Iraq was perhaps the most complicated of his pontificate, threatened by fears ranging from COVID-19 risks to the possibility of suicide bombings by dormant terrorist cells, to the ongoing reality of regular attacks by pro-Iranian militias on both civil and military targets in the country.

On his way back to Rome, Francis told reporters during an in-flight press conference that he had prayed about the COVID-related risks of the visit and had asked for advice before ultimately making up his mind to go.

“I made the decision freely, but it came from inside,” Francis said. “And I said, ‘May he who makes me decide this way, take care of the people’.” 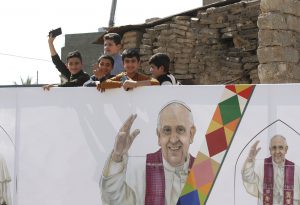 Children are seen near an image of Pope Francis during the pope's visit with the community at the Church of the Immaculate Conception in Qaraqosh, Iraq, March 7, 2021. (CNS photo/Paul Haring)

The trip, the first for Francis outside of Italy since November 2019, included five cities – Baghdad, Najaf, Mosul, Qaraqosh and Erbil – and seven speeches, including a homily at a Mass attended by over 10,000 people. Throughout the visit, in both words and gestures, the pope appealed for a simple goal: peace. He made a point of doing so in the presence of leaders from various religious traditions during a stop in Ur, the birthplace of Abraham, considered a prophet by Jews, Christians and Muslims.

On Sunday, March 7, he visited Qaraqosh, a village that before the rise of ISIS in 2014 boasted the largest Christian community in Iraq with some 50,000 inhabitants. While there, Francis heard the story of an Iraqi Christian woman named Doha Sabah Abdallah.

Abdallah described to the pope how her family had fled Qaraqosh after the first attempts from ISIS to invade Qaraqosh. Three days later, everyone returned, because “being Christians, we are ready for martyrdom.”

On the morning of August 6, 2014, days before ISIS conquered the city, a mortar shell killed her small son and his cousin, as well as a young neighbor who was preparing for marriage.

“The martyrdom of these three angels was a clear warning. Were it not for that, the people of Qaraqosh would have remained and would inevitably have fallen into the hands of ISIS,” she said. “The death of the three saved the entire city.”

Sabah’s witness of forgiveness clearly left a mark on Francis.

“Forgiveness – that’s a key word,” he reflected during the in-flight press conference. “Forgiveness is necessary to remain in love, to remain Christian. The road to a full recovery may still be long, but I ask you, please, not to grow discouraged. What is needed is the ability to forgive, but also the courage not to give up.” 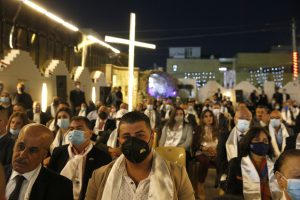 “We trust in [God] and, together with all people of good will, we say ‘no to terrorism and the manipulation of religion,” he said, repeating a request that became the mantra of the trip.

In Qaraqosh, the pontiff encountered Iraq’s Christian community, in a church that between 2014 and 2017 served as a shooting range for ISIS. Today, thanks to Catholic charities such as Aid to the Church in Need and the Knights of Columbus, close to half of those who fled have been able to go back, though their future in the land of their ancestors continues to hang on a thread. Without jobs and still under the threat of rogue militias, a cloud of danger looms.

Earlier that day, Francis was shocked by the man-caused devastation of Mosul, once a thriving city.

“I had seen things, I had read a book, but [seeing the destruction] touches you,” he told reporters on Monday. “When I stopped at the destroyed church, I had no words. It’s unbelievable. Not only that church, but others too, and a mosque, that evidently was not aligned with these people.”

“Human cruelty, our cruelty, is impossible to believe,” he remarked.

Saturday saw one of the many “firsts” on this papal visit to Iraq, when Francis went to the city of Najaf to visit Grand Ayatollah Ali al-Sistani, one of the most revered leaders of Shia Islam. Some 70 percent of the country favors a separation of religion and state, though the remaining Iraqi Muslims veer towards an interpretation of Shia Islam closer to that of theocratic Iran. Pro-Iranian militias in many parts of the country are trying to accomplish what ISIS couldn’t: To rid Iraq of its many minorities, including Christians and Yazidis. 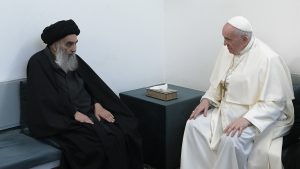 Al-Sistani plays a key role in Iraq’s peace and stability, and though he’s usually a quiet figure, he’s not afraid of raising his voice to combat violence, as he did with a 2014 fatwa urging Iraqis of all faiths to come together to combat ISIS.

Though some might perceive it as a symbolic gesture, for Francis the 50-minute conversation with the Shia leader represented a second step on a path towards understanding after the Declaration on Human Fraternity that he co-signed with the Grand Imam of Al-Azhar, the most influential leader of Sunni Islam, in 2019.

Top Vatican diplomat Archbishop Paul Gallagher believes that with his trip, and the overall diplomatic efforts of the Holy See, Pope Francis is trying to stop the “hemorrhaging of Christians in the Middle East- Iraq, Lebanon, also Syria-” but conceded it’s “very difficult.”

Christians cannot be forced to stay in a land that holds their past but offers them little future, Gallagher noted. Hence the urgency the pontiff felt in making this pilgrimage: Time is of the essence when it comes to the survival of minorities in the region.

This, Gallagher said, “is a significant challenge to the future of Christianity, and it is a geopolitical problem, because Christians have always been there, they have always had a role amidst the other communities, the larger, more powerful communities,” the archbishop said.

While he was in Mosul, the former capital of the ISIS-proclaimed Islamic caliphate, Francis said that the “tragic diminution of Jesus’ disciples here and across the Middle East, does incalculable harm not just to the individuals and communities concerned, but also to the society they leave behind.”

The stage set up at the Hosh al-Bieaa (“Church square”) in Mosul for a prayer service for war victims was a stark contrast with the dilapidated ruins of the city surrounding it. Though efforts are being made to rebuild the city, removing the tons of rubble has proven to be a painstakingly slow process.

Francis had the opportunity to see the devastation from the sky during his helicopter ride from the nearby city of Erbil, capital of Kurdistan, where he said an open-air Mass later in the day. 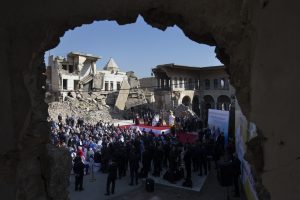 Pope Francis participates in a memorial prayer for the victims of the war at Hosh al-Bieaa (church square) in Mosul, Iraq, March 7, 2021. (CNS photo/Paul Haring)

Mosul is the administrative capital of Nineveh, and for the past 2,500 years it has represented the pluralistic identity of Iraq. The rise of ISIS, and the war that followed, caused vast damage to the city’s skyline, destroying landmarks such as the Al-Hadba minaret of the Al-Nouri Mosque and the clock tower of the Church of Our Lady of the Hour, the first of its kind in the Middle East.

During his visit, Francis defined the damaged structures as reminders of the “perennial human desire for closeness” to God. The clock, he added, “for more than a century has reminded passersby that life is short and time is precious.”

Despite the many unforgettable snapshots of the visit, there was one arguably understated moment which best captured the importance of the trip: Francis’s encounter with the priests, religious and bishops in the Syro-Catholic Cathedral of Our Lady of Salvation, where on Oct. 31, 2010, 48 Iraqis were martyred, murdered by Islamic terrorists during Mass.

The deaths of those modern-day martyrs, who number in the thousands in the Middle East, “are a powerful reminder that inciting war, hateful attitudes, violence or the shedding of blood are incompatible with authentic religious teachings.”

“This evening I want to thank you for your efforts to be peacemakers, within your communities and with believers of other religious traditions, sowing seeds of reconciliation and fraternal coexistence that can lead to a rebirth of hope for everyone,” Francis said.

Peace, hope and forgiveness: three themes at the center of Christianity, taken for granted by some and dismissed as considered utopian by others. But here, during a historic visit to the land of Abraham, they were at the center of the pope’s message.