Indigenous and Catholic: One can proudly be both, pope says

While presented as missionary work, the operation of residential schools by Catholics in Canada was actually an attempt to impose European culture on Canada's Indigenous people, Pope Francis said.

"One cannot proclaim God in a way contrary to God himself," the pope said July 25 at Edmonton's Sacred Heart Church of the First Peoples.

Several of the First Nation, Inuit and Métis parishioners of Sacred Heart and many of their parents and grandparents were forced by the Canadian government to attend residential schools, which were set up to force the Indigenous to adopt European languages, culture and forms of Christianity.

"If we think of the lasting pain experienced in these places by so many people," the pope said, "we feel nothing but anger and shame."

"Nothing can ever take away the violation of dignity, the experience of evil, the betrayal of trust," suffered by the students, he said. And nothing can "take away our own shame as believers."

The pope did not mention the physical and sexual abuse many Indigenous people said they endured in the schools; rather, he focused on the church's complicity in trying to suppress Indigenous identity and culture.

"That happened because believers became worldly, and rather than fostering reconciliation, they imposed their own cultural models" on the students, he said.

Unfortunately, he said, "this attitude dies hard, also from the religious standpoint."

"Indeed, it may seem easier to force God on people, rather than letting them draw near to God," Pope Francis said. "Yet this never works, because that is not how the Lord operates."

"He does not force us, he does not suppress or overwhelm; instead, he loves, he liberates, he leaves us free. He does not sustain with his Spirit those who dominate others, who confuse the Gospel of our reconciliation with proselytism," the pope said.

"While God presents himself simply and quietly," the pope said, "we always have the temptation to impose him, and to impose ourselves in his name."

Pope Francis made his early evening visit to the parish -- the first officially designated Indigenous parish in Canada -- after an emotional morning meeting in Maskwacis, where he apologized to survivors of residential schools. 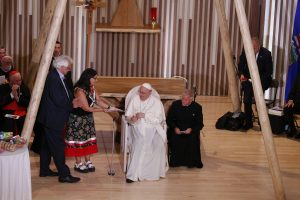 Candida Shepherd, a member of the parish council, and Bill Perdue, chair of the parish finance committee, formally welcomed the pope. Both are members of the Métis community and described the parish as a place where they could live fully their identity as Indigenous Catholics.

The parish is in a neighborhood where many rely on assistance with food and housing or need healing and liberation from addiction.

Perdue told the pope, "Many of those challenges can be traced back to the legacy of the Canadian Indian residential school system, including those operated by the Roman Catholic Church."

Pope Francis' visit, he said, "gives us the opportunity to confront, to understand, to release and to transcend our trauma" and has inspired parishioners to work to make the church "a venue for healing and reconciliation between the Indigenous of this land and all those who choose to come here now and in the future."

At Sacred Heart, the pope expressed admiration for the many survivors who did not lose their faith and who still go to church.

"I can only imagine the effort it must take for those who have suffered so greatly --  because of men and women who should have set an example of Christian living -- even to think about reconciliation," he said.

About 250 people filled the church for the pope's visit and for prayer and music before he arrived.

A traditional smudge ceremony -- a purification ritual with smoldering sage, sweetgrass, cedar and tobacco -- also preceded the pope's arrival at the church, which has a teepee frame over the sanctuary, a teepee tabernacle and a wood altar rising from a root ball.

The church, Pope Francis said, must be a place of reconciliation, a place where all are welcome as they are and where discrimination has no place.

The architecture and furnishings at Sacred Heart reflect both Indigenous wisdom and Christian truths, the pope said.

"Joined to the earth by its roots, a tree gives oxygen through its leaves and nourishes us by its fruit," he said. At Sacred Heart, "a tree trunk symbolically unites the earth below and the altar on which Jesus reconciles us in the Eucharist in 'an act of cosmic love' that 'joins heaven and earth, embracing and penetrating all creation,'" he said, quoting his encyclical on the environment.

The way forward, Pope Francis said, is "to look together to Christ, to love betrayed and crucified for our sake; to look to Christ, crucified in the many students of the residential schools."

On "the tree of the cross," he said, "sorrow is transformed into love, death into life, disappointment into hope, abandonment into fellowship (and) distance into unity."